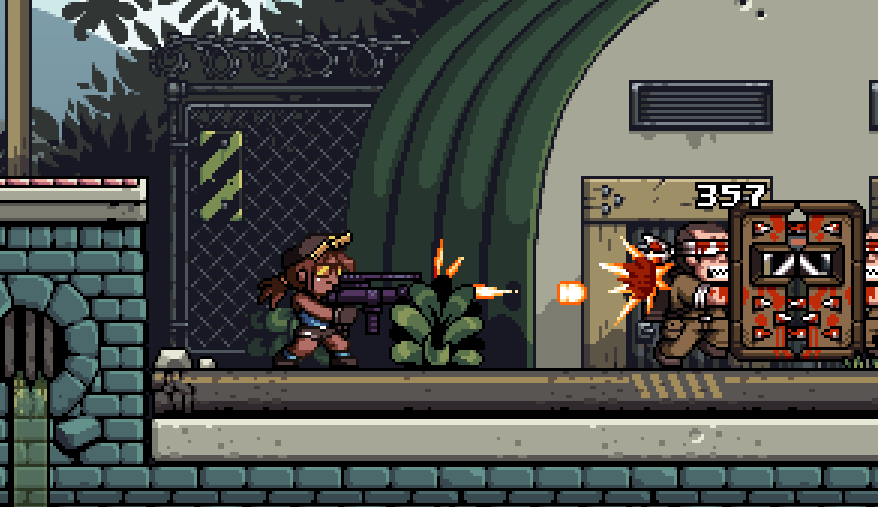 Tribute Games is one of several independent game companies looking to carve their notch in virtual history, and they seem off to a good start. Founded by Jonathan Lavigne, Jean-Francois Major, and Justin Cyr, these fellas worked at Ubisoft as developers on Scott Pilgrim vs. the World: The Game, considered by those who played it to be a great licensed title and a rare modern entry in the desert of beat-em-ups. After Wizorb, Tribute decided to make their next game far more of a banquet packed with oodles of potential content, establishing a Kickstarter for it in 2012 and thankfully reaching its goal. Yet despite not reaching most of their stretch goals, the team took the time to cram as many features into their product as possible and put in all the bonus goals anyway. The result is over one hundred missions, more than a dozen vicious bosses, and lots and lots and LOTS of guns. Thus, it would be named Mercenary Kings, and it would be impressive. 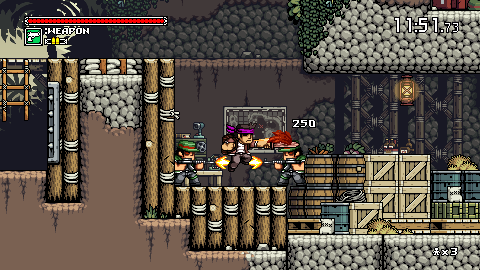 The premise sees bio-engineer Dr. James Neil arrested by the terrorist forces of the CLAW organization, with his base of Mandragora Island placed under martial law. Neil was working on the Mandrake project, a scientific formula to use the island’s indigenous mandrake creatures for enhancing the physical capabilities of soldiers. CLAW’s intervention causes Colonel Ben Tasker to send in his team of crack commandos, the Mercenary Kings, to rescue Neil and give CLAW a severe black eye. King, Empress, Royal, Rajah, and Majestic fly to the island but are almost immediately ambushed and brutalized to near-death by CLAW’s unforgiving soldiers. Tasker’s team manages to find the bodies of King and Empress and revive them with the Mandrake formula, but the other three are missing in action. Now that they’re stronger and know what they’re dealing with, King and Empress start their mission again and intend to succeed or die again trying.

So it definitely has the backstory and feel of an action film/game. Visually, the game bears a massive resemblance to SNK’s immortal Metal Slug series, with fluidly animated sprites showing off a lot of detail and character. Paul Robertson, the artist behind the Scott Pilgrim game and Wizorb, took great care to give off an MS-like feel without ultimately cloning it. The result certainly looks fantastic, but anyone expecting a highly intense mile-a-minute thrill ride like MS may want to consider the likes of Intrusion 2 or Bleed. Mercenary Kings, for better or worse, is actually quite a bit slower-paced and places heavy emphasis on taking missions and collecting materials to craft weapons, a gameplay structure comparable to Monster Hunter, or more appropriately for the war theme, Metal Gear Solid: Peace Walker. You only get so few missions to start at the “Recruit” rank, but more are unlocked within the rank by completing certain missions until you get to that rank’s major mission, denoted by a red exclamation point. This nets you the next rank and a whole new set of missions, and the process keeps on going until you get to “General.” 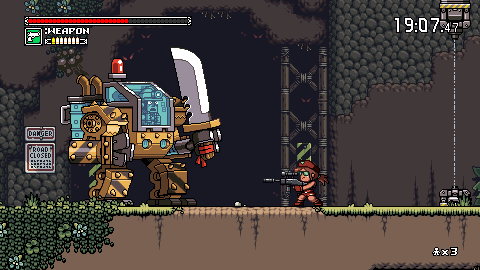 You get missions through your hub, Camp Crown, where you speak to Col. Tasker to highlight your next mission, and the team’s pilot, Bobby Ryack, whisks you away to the mission map when you’re ready. There are many other team members who serve various purposes, such as shopkeep Golden Gate, who supplies you with various helpful one-use items, Cadillac, who details every type of enemy you’ve faced so far, and Dr. Bluebell, who gives your character various modifications to make them faster and/or stronger. But the real star of the crew is Lawless, your gunsmith, through which the game’s weapon crafting system comes to life. There’s also the blademaster, Ironside, who isn’t as important but can provide you with a useful backup weapon. Still, it’s all about the guns, and you’ve got to find materials in missions and climb up ranks to get better armaments.

Each mission gives you a primary objective in one of several maps, ranging from rescuing hostages, eliminating enemies in a particular section, gathering a certain set amount of materials, or destroying a boss. Beating the objective earns you cash to be spent on upgrades, as well as a random compliment of bonus materials. You can increase your total payout by completing sometimes-assigned secondary or tertiary objectives, and nearly every mission also has a secret objective which is only signified once you complete a part of it. You’re given a generous chunk of time for most missions, except for a few with real simple goals but only give you about five minutes to finish. For all the time you’re given, you’re often encouraged to explore and kill off as many enemies as you can for the materials they drop. Most enemies have a common material which they cough up somewhat frequently, with one or two rarer materials that you’ll get if you slay them enough. 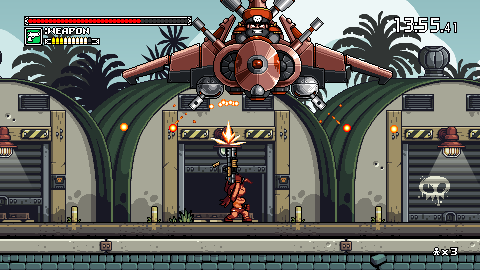 As you can probably ascertain, some of the tougher-to-grab materials may take a while to see drop from their corresponding enemies. While some more exotic materials can sometimes be found in containers on certain missions, the quest for materials often comes down to unfortunate bouts of grinding. The Hoarder mod helps you grab common materials without much effort, but those rare ones may take many minutes even with the Lucky Penny mod. Material costs for some of the better guns tend to be rough, often requiring a unique material that can only be found from boss battles. Plus, the crafting system itself only shows what you get for your current gun part without the ability to demonstrate statistics while matched up with other parts. You pretty much just have to buy to try and it may not be what you want after you get it.

Furthermore, while you get over one hundred missions to play with, the nature of most missions just boil down to either finding or killing something, without too much variety. Adding to the repetition is the rather sparse quantity of maps, of which there are approximately a dozen. It feels like there could have been more mission variety, or at least fewer missions traded in lieu of more maps. Another nitpick is that the enemies themselves can get redundant, where you’re shown a promising variety at first but you find that you’ll mostly be dealing with the common “griff” troops for the lion’s share of missions. The variety does come back a bit with later-game missions, but the overall game can become a bit of a slog to play in long bursts. 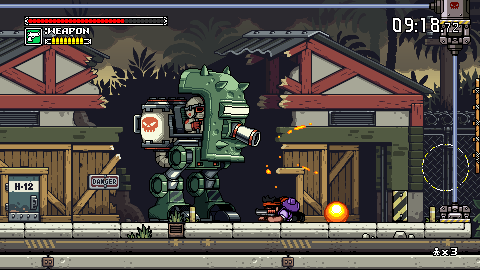 This does sound like excess griping, but Mercenary Kings is still a damn fun game, even if its value isn’t immediately apparent. While there aren’t many maps, each one is huge and packed with various passages and compartments, where curiosity is often rewarded with rare materials. When you are able to make new gun parts, it’s always great to see what your concoction does in the field, with most of the variety coming from the different ammo types you get to make. There are basic bullets, giant magnum rounds, multiple shotgun pellets, armor piercing rounds, and more exotic ammo types like bouncing balls that adhere to gravity, shrapnel pieces that explode into smaller bits on impact, and even homing missiles which can somehow be fired out of pistols. Ammo and knives can be neutral or adhere to one of four elemental affinities: Incendiary (good on humans), electric (good on machines), caustic (damages normally invincible shielding), or cryo (potentially freezes enemies).

It’s cathartic to mash the fire button and blast down enemies if you have a semi-auto weapon, or just mow them down with full auto. You’ll eventually run out of bullets with various guns having different reload times. Generally, the longer the magazine, the more time the reload takes. However, you can press a button to initiate an early reload, and a bar appears while you’re doing it to be pressed when a notch reaches the yellow segment for an early reload. Hitting within the green segment on this bar actually imbues your reloaded bullets with a bit more extra damage, encouraging you to empty your magazines as often as possible for that extra kick. You won’t usually need that extra slice of pain, but it helps for boss elimination or capture missions. The action really shines whenever you get to a boss fight, as despite bosses being repeated like most other elements, they’re always just challenging enough to never get old. From the Aliens power loader-inspired Steel Soldier to the ridiculous yet well-armed dog robots piloted by an actual dog, you’ll have to bring your best weapons and/or make judicious use of the dodge button to fare well against the bigger baddies.

So if you do really like the grinding, then Mercenary Kings can take hours out of your day. If not, then it’s also enjoyable playing for only short bursts of about two to four missions. Plus, with the assistance of your communications specialist, Miss Zero, you can bring up to three other friends into your game. For missions where you need to find materials or hostages, they go much faster when you have buddies to split up and search. Having pals join isn’t a total walkover, as enemies gain more hit points and your cash rewards are lessened when split amongst other players. Also, you only have three lives to spare, where losing a fourth fails the entire mission, and that lives pool is somewhat annoyingly shared among other players. It would be far less of a hassle if everyone had their own life stock and the last death didn’t scrub the mission for everyone else. 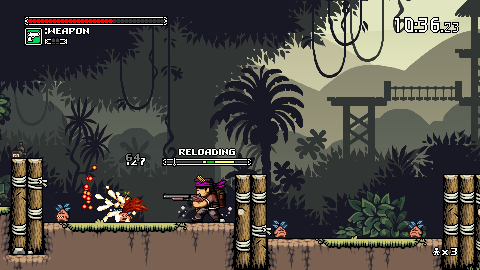 Flawed though it may be, Mercenary Kings is nonetheless incredibly well-made. Tribute put a lot of love into its design, giving characters really fluid animations and making each gun look very different from each other, a few of which even pay nods to action and sci-fi properties like Mega Man, Robocop, and Judge Dredd. Patrice Bourgeault’s soundtrack can’t be overlooked either, as each map has an upbeat tune that conveys either positive action or fearful urgency. The laid-back calypso style of your camp base makes for some easy listening while deciding how to make your next gun. Admittedly, as with most other elements, the music can also get a bit tiresome, but that’s merely a spinoff of the game’s repetitive nature.

Mercenary Kings has the groundwork for a truly astounding game. There are a lot of solid concepts here that could stand to be further refined with more variety in missions, enemies, and maps. Indeed, a post-release Reloaded Edition expansion helps to add some extra content to the core game, including two new characters, several new weapons, and a new level. Perhaps most importantly, you can now buy materials directly, so it greatly reduces the grind. The reward for completing missions are given too, plus your objective is now pointed on the minimap. It’s definitely an improvement, though due to the basic nature of the game, it’s best player in short bursts.