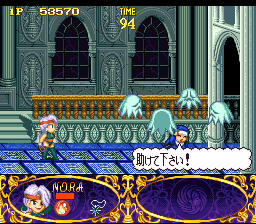 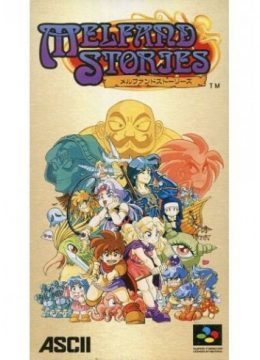 Melfand Stories is a SNES-exclusive, Japan-only title that, thanks to its obscurity, is sometimes considered a “hidden gem” for the system. Because of the European fantasy-styled box artwork, people often mistake it for a RPG, but it’s an action title through and through. It was also developed by Sting, a company who would later become known for RPGs like Treasure Hunter G, Baroque, and Riviera.

The story is the most generic fantasy RPG plot possible: the king of Melfand’s adviser, Nomolwa, betrayed him and usurped the kingdom together with his accomplices, Labyuless the warlock and Brad the black knight. Four adventurers come to the kingdom by ship, traversing the lands full of monsters and perils to get to the king’s castle, where the evil man resides. Our heroes are the typical balanced RPG party, comprising of plucky rogue El, smug knight Corse, cute elf witch Lemin and tomboyish thief Nora. 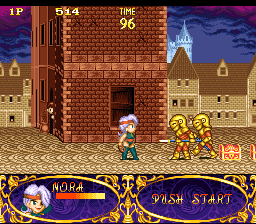 Melfand Stories is reminiscent of Capcom’s coin-op The King of Dragons, being a side-scrolling hack ‘n slash heavily based on Dungeons & Dragons lore without being officially licensed, and featuring similar elements, like the orbs containing magic spells that function as smart bombs (also a dragon boss so huge, only the head fits on the screen). However, it is even more simplistic than the arcade game. Stages are just single-plane stretches of terrain traversed from left to right; our heroes’ weapons and clothing can’t be upgraded or ever change (no actual RPG mechanics at all); there are no special moves, only a slightly more powerful attack triggered when the player can land several hits in sequence, and a combined attack when in 2-player mode. Most stages feature a piece of jewelry that can be collected, but doing so seems to affect only the end-of-stage score tally and not the actual gameplay.

The four characters are mostly the same, just with slight differences in speed, power and reach of their attacks. However, every one of them can parry and block almost every kind of attack, making a short, simple game even shorter. The player has a single life and starts with three continues, but they can gain more by racking up score points, especially after completing the two bonus stages (killing a bunch of harpies and destroying a statue of Nomolwa in a short time limit). After losing a life one can continue on the spot and change the character, adding to the “arcade-y” quality of the title. 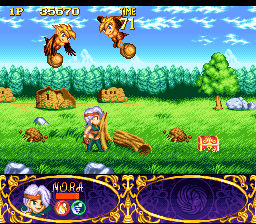 In fact, the only thing that separates Melfand Stories from the arcade games of the time is that there are multiple endings, triggered by the choices taken on the world map: after beating each stage, the map presents us with a choice between an “easy” and a “hard” path. The branching paths influence not only, obviously, the areas’ difficulty, but also the final stage in the castle (the halls, the treasury or the armory) and a few other elements; for example, by choosing the easiest path our heroes will be helped in the final battle by a nun who they saved from a group of ghosts in an earlier stage.

There’s not much more to be said about the gameplay, which is very simplistic and bare-bones for a console release, also considering that the game can be completed in half an hour. However, the style almost makes up for it. The crisp and pastel-colored graphics are halfway between a 1990s kids’ anime and a fairy tale book, with multiple parallax scrolling, an excellent use of colors and a few effects, like the use of Mode 7 during the bonus stage where we have to exterminate a flock of harpies while on a wagon heading to Melfand’s walls. There are several cute touches, for example the expression of the characters’ portraits changing when they are hurt, nice set-pieces like the battle against a golem inside a church, or wacky moments like the random ninja mid-boss appearing in the middle of an European-style town. It’s also worth it to see the classic D&D bestiary (griffons, lizardmen, wyverns, manticores, dark elves and so on) rendered as adorable, colorful sprites; every boss and mid-boss creature keeps their standard English name, and in fact the whole game is in English, save for the very few dialogues and the ending sequences. 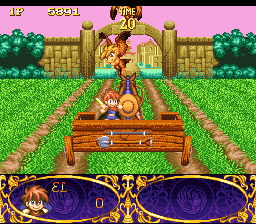 In the end this title is no “hidden gem”, just a good-looking and competently made action game that would have worked better as a coin-op, being too short and shallow for a console experience. Still, collectors and fans of obscure Japanese titles can get a kick out of it.