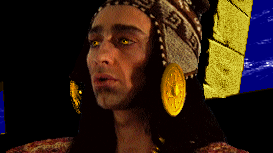 This entry is part 2 of 2 in the series Inca
Inca
Somehow Inca proved popular enough to spawn a sequel, which ended up being a good thing, because it’s a big improvement of its predecessor. The first Inca probably sold well due to its relatively impressive animated cutscenes, so Coktel Vision ramped up the cinematic aspects and added an actual plotline, complete with digitized actors and, in the CD version, full voice. All of it – absolutely every single second of it – is brilliantly awful. 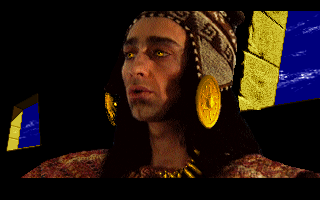 The game first puts you in the shoes of El Dorado’s nimrod son Atahualpa, who offends his father’s council, steals a Tumi as an act of rebellion, inadvertantly declares war on Aguirre, and summarily gets himself killed. The focus then shifts to El Dorado as he teams up with a mysterious foreigner named Kelp, who dresses like a 1920s fighter pilot, as they both wage further war with the Spanish and avenge Atahualpa’s death. 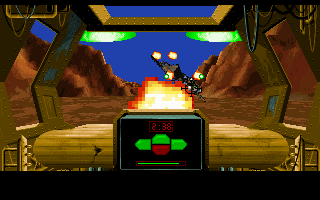 Although Inca II was released on CD, it was developed to be released on disk format too, so it doesn’t actually use much full motion video. Instead, it uses still pictures of digitized actors, with only their eyes and mouth moving during dialogue. It looks remarkably wooden and a bit creepy, but there’s only maybe two or three shots of each character, reused over and over throughout the entire game, most of which are extremely awkward close-ups. As silly as this all looks, it’s really the voice acting that takes the cake. Why does Atahualpa sound like a whinier version of Gilbert Gottifried, if such a thing was possible? Why does El Dorado read each line LIKE THE SCRIPT WAS WRITTEN ENTIRELY IN CAPS. Everything comes together to become the absolute best kind of embarrassment. 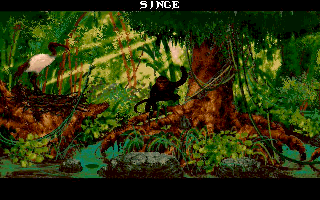 The game itself is substantially improved too. The dungeon crawling sequences are entirely gone, and the puzzles are less obtuse, although even more remarkably easy. The space fighter sequences are substantially better too, with an actual targeting system and better controls. There are no more Death Star trench runs, but there is a rail shooter sequence as you defend a train running through a canyon. The CD-ROM version also features an additional puzzle at the end not found in the disk version. You have unlimited lives now, and the game keeps track of all the passwords, so you can restart at any chapter anytime you want. Due to the voices and some of the FMV, there’s not nearly as much CD audio as its predecessor, so the soundtrack isn’t quite as good. It’s still a short game too, but regardless, it’s more than worth it for the ride. 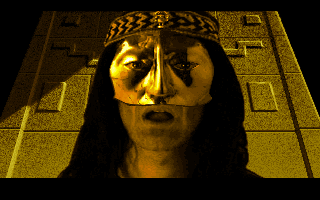