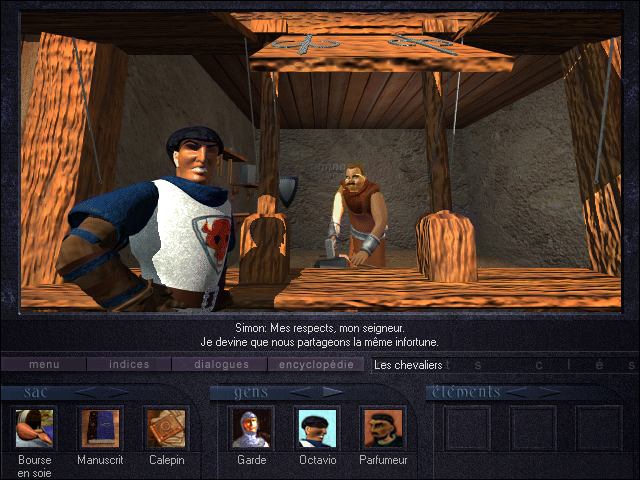 Arxel Tribe, originally founded in 1990 in Slovenia by two architects, specialized in 3D modelling and the virtual reconstitution of buildings and cities. Three years later, two Frenchmen, Stephen Carrière and Guillaume de Fondaumière (later co-founder of Quantic Dream), joined the company and turned it into a game development studio. Stephen Carrière’s mother, Anne, was at this time the publisher in France of Paulo Coelho, a successful Brazilian novelist, and Jean Giraud, also known as Mœbius, and who had previously contributed art to Panzer Dragoon, had illustrated a previous French edition of one of Coelho’s books. Mix together the relative serious of Arxel Tribe, the great artwork of Mœbius and the ridiculous new age philosophy of Coelho, and you get Pilgrim: Faith as a Weapon.

Arxel Tribe developed around fifteen games, a few of which were for Cryo Interactive, and the vast majority shared common aspects: they were adventure games set in specific historic times and inspired by real or fictitious events with the more or less proclaimed goal of being educational. And they also played very much like Myst, which means that you have to click your way through a slideshow of a pre-rendered 3D environment to solve puzzle after puzzle.

But the studio’s first game was then to be an adaptation of one of Coelho’s novels, The Pilgrimage. Thankfully, Pilgrim: Faith as a Weapon does not follow the autobiographical book too much, and the author’s influence can hardly be perceived until you reach the middle of the game. The game is available in English, French, German and Brazilian Portuguese, so do not mind the French screenshots.

The action takes place in the south of France in the year 1208, and you play as a young man named Simon de Lancroix. On his deathbed, your father, Adalard, begs you to bring a manuscript to Petrus, a friend of his living in Toulouse. This manuscript was brought back from a crusade by a knight Templar and could be the legendary lost gospel of Saint John. Unfortunately for you, the Templars are a renegade religious sect that the Catholic Church considers to be an enemy, and the Pope Innocent III sends one of his inquisitors, Diego d’Osma, after the manuscript. This inquisitor will actually never threaten you in any kind of way, going as far as to just walk away once he finally finds you (although he does have a good reason).

The puzzles themselves consist for the most part in helping other people until you can move on to the next situation. Your first task, after managing to find the manuscript, will be to help a merchant and a troupe of entertainers cross a river on the road to Toulouse in spite of the broken bridge. To do so you need to get them to cooperate (the motif of cooperation being used throughout the game), and that is when the clever interface becomes useful. You can carry a few items in your bag, like the manuscript, a stick, and other such light items, but whenever you examine an important object that is too big or too heavy to be carried, like a tree or a cart wheel, or even concepts like a law, it gets added to a list on the right-hand side of the interface so you can later bring these up in a conversation. The characters you meet also get added to a third list, so you can mention them in conversation as well with a simple click of the mouse. Each time you move on to a new part of the game, these lists are cleared up of anything you won’t need anymore, so it stays manageable.

There are two or three timed sequences where you have to find a solution in a given (albeit invisible) time limit, failing which you reach a game over screen. You can also die in a few occurrences, but always by doing something clearly stupid, like trying to fight your obviously very powerful nemesis. After a game over you’re sent back to a previous point, which is often just after a cutscene. In the later parts of the game, that is usually quite a ways off, so, as usual, “save early, save often”. 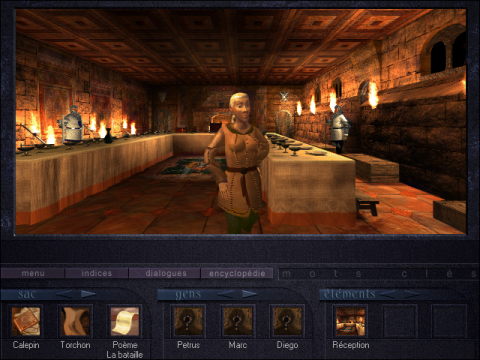 Navigation through the environments is of course very artificial, because you move as if on a grid, and that can sometimes cause you to miss a crucial path to part of a scene and some scenery elements have to be approached at a certain, unnatural, angle in order to be usable in a puzzle, which will almost never be the most natural way to do it. There are also only two or three unwinnable situations, but they are fairly easily avoided and are always easy to spot, like if you give all your money to the beggar in Toulouse, money which you need to use literally next door.

Although Mœbius provided artwork for the game (available on a CD of the game’s rare special edition), it is quite hard to infer that from looking at the 3D models. The characters look like they are made out of plastic, and the sparse animations are very stiff, but it all looks very good for the time and works to create the right atmosphere for the game (although the landscape outside Toulouse does looks much more like a barren desert than the last time I was there). The only real annoyance is that the characters who do have an idle animation will only answer your questions/requests when their animation is over, which may leave a few seconds between the time you click on them and their reaction. You end up being glad most of the characters just stand there, motionless, waiting for you to interact with them.

Another grating aspect is the voice acting. Most of the voices are fine, but the script often forces the actors to utter sentences that no sane human being would pronounce, even in the Middle Ages. Even so, some voices are simply excruciatingly awful, like the incredibly slow-paced and annoying witch’s, or the accent of the Spaniard at the gates of Toulouse which is so terrible you could hear about a dozen different nationalities in it, none of them done properly.

At least the music is more pleasant to the ears. Very little of it has been written specifically for the game; for the most part it consists of interpretations of classics such as “Greensleeves”, one movement from Mahler’s “Titan”, or “Asturias (Leyenda)” by Albéniz. The pieces are all quite short and loop infinitely during each scene, but manage nonetheless to create the right atmosphere for an adventure/puzzle game. 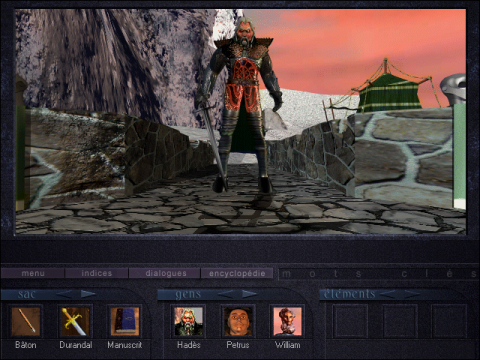 The “education” side of the game is very well handled, as it is never forced on you. One of the buttons on the interface opens up an encyclopedia containing around 150 short entries about the Middle Ages and earlier; many topics are covered, ranging from major historical figures to religion, politics, daily life at the time, historical events, etc. During conversations, if a character mentions a topic available in the encyclopedia, a keyword will sometimes appear on the screen which you may click to go to the corresponding entry. This is never required but can prove to be quite interesting if you’re in the mood for a bit of History. The entries themselves are very spartan, consisting exclusively of text. Reading may have been made more pleasant with the addition of a few images here and there, but it does the job.

Gameplay-wise, there is only one puzzle that requires you to actively check the encyclopedia. To this effect you also have an ingame notebook in which you may copy-paste any bit of text from the encyclopedia. You may need to read a few more entries in order to properly understand what is going on, and you definitely do need to read more for the final “puzzle” which is no less than an exam about what you’re supposed to have learned, but it is overall quite enjoyable. And even if you’re particularly averse to learning anything new, there is a walkthrough available on the CD itself. All in all, this would all be very nice if it weren’t for the stain of Coelho’s “philosophy” that appears right in the middle of the game. 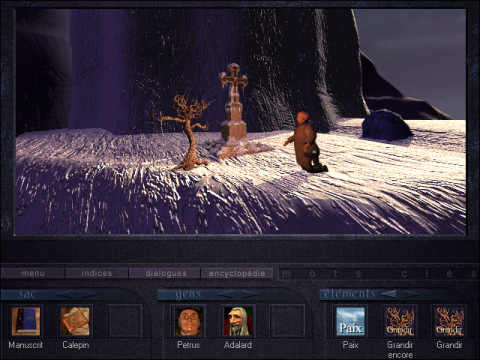 I am a tree, the madness begins…

After you have spent the first half of the game doing nothing more than helping other persons to help yourself via rather trivial puzzles and progressing from one situation to the next, you finally meet Petrus, who reveals to you that your father was the leader of “The Tradition”, a fictional religious sect which goal is apparently to bring the absolute truth that no other religion can give (failing to point out that this is exactly what all religions claim). This sequence with Petrus, which comes completely out of the blue, is filled with absolute nonsense that even the stonest of all hippies would find laughable. Summarizing this “philosophy” would be rather impossible, because it makes no sense, but it consists mostly of confused and incoherent mentions to dreams, peace, how we grow up to give up on them, that we knew everything as children but now need to re-learn it all, and other such platitudes.

From there on the game takes on (or at least tries to take on) an almost exclusively symbolic and “spiritual” aspect, and you are confronted to the supernatural (like the witch’s ghost and your inhuman arch-enemy). The final part of the game apparently takes place in limbo, although none of it is very clear nor explained, and you are confronted to puzzles centred around concepts such as compassion, love, salvation, and the four horsemen of the apocalypse, although it is all, like Coelho’s whole “philosophy”, only there to give the appearance of depth and is ultimately perfectly meaningless.

Arxel Tribe would later collaborate with the Brazilian author on two other occasions, producing The Legend of the Prophet and the Assassin (in which a Simon de Lancroix is mentioned, although it is not the same character) and The Secrets of Alamût. It is unfortunate that such games had to be marred by his mediocrity, which is nothing more than low-grade proselytizing, but the games, like Pilgrim: Faith as a Weapon, nonetheless retain the classic feel of this studio’s and Cryo’s adventure games and are still worth your attention if you’re an adventure fan.