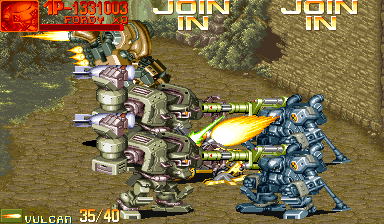 Following the excellent Alien vs. Predator, Armored Warriors was Capcom’s third beat-em-up for the CPS-2 hardware. Released on the 16th of September 1994 (albeit with a very limited run in the USA), the game allows up to three players to control and fight giant mechs, with the unique ability to customise the limbs and weaponry of your unit by using parts dropped by defeated enemies.

Choosing one of four soldiers and their accompanying mech, you’re sent from Earth in the year 2282 to rescue the Raian capital of Melkide from forces unknown, after Earth and Raia signed a peace treaty the year before. However, unbeknownst to the public, the real reason for your mission is to defeat the invaders and bring Raia under Earth’s control. The writing is reminiscent of ‘80s and ‘90s action movies, and typical of a lot of action arcade games of the era. 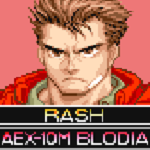 Rash rides the AEX-10M BLODIA, and is an eager hot-head with great skill, but not much experience. He pilots a general all-round machine that lacks a little punch, but makes up for it with an above average attack range. 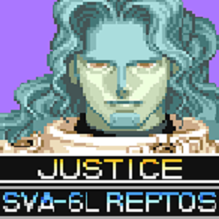 A soldier bureaucrat from Raia, Turner has been sent to promote peace. His mech, SVA-6L REPTOS, specializes in close range combat, and is also fast and agile. 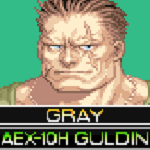 Reed is one of the few surviving members of the legendary Death Squad. His powerhouse AEX-10H GULDIN can blitz through opposition, with the caveat that it is much slower. 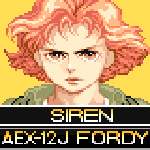 Half-French and half-Raian, White joined the armored core at 14, becoming the youngest rookie in history. She pilots AEX-12J FORDY, the fastest of all the mechs, although it suffers from poor armor.

Your Red Shield Unit is also joined by Commander Galager, who sets your objectives, Burns the mechanic, and Operator, a young woman who briefs you on your missions.

The sprites are as chunky, bold, and colorful as you’d expect from Capcom, and are animated very well. The backgrounds contain plenty of detail, with most being either sci-fi or urban themed. For a game about mechas, you may think that the enemy designs would become samey, but Capcom have managed to put together a large variety of bots, from your standard grunts, to scorpion mechas, Wipeout-style ships, and tank-like robots. When combined with the large amount of additional weaponry that they can wield, they’re presented in enough different varieties and configurations that things don’t begin to pall until the last quarter of the game. 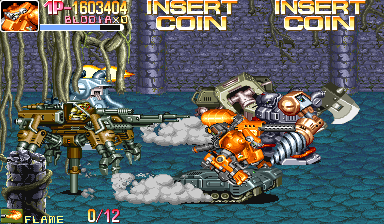 As well as one button for jumping and one for attacking, there’s a third for your subweapon, which has limited ammunition. Jumping and then attacking unleashes a flying strike, and double tapping a direction starts you into a sprint, and pressing the attack button during this time launches you into a dash move. Pressing both buttons at the same time initiates a special attack which saps your lifebar. If two or more players are playing the game, picking up radios in the level allows you to share a larger combined mecha. So far, business as usual, but things become really interesting when augmenting your mecha.

By picking up items left by fallen enemies, you can change your main attack, subweapon, and the legs of your ride. These upgrades are lost when you lose a life, although you have a brief period to pick them back up. The different parts massively change up the gameplay, from the electric Chain Spark, to the brutally effective Death Drill, to the very fun Laser Blade, which satisfyingly cleaves enemies in two. And that’s just scratching the surface of the arm upgrades; your legs can be changed to scorpion feet or tank treads, and your subweapon can be anything from missiles to lasers to a flamethrower, among others.

Armored Warriors plays a lot faster than you might expect from a game based on giant robots, and features lots of hectic metal-on-metal action when things get hotter. It’s tough, although fair; most enemies have attack patterns that can be learned, and by managing the crowd and picking the right augmentations, you can get through most encounters without being hit. Occasionally, containers or enemies drop health pick-ups, but this is balanced by many of the enemies (especially the bosses) having multiple health bars. Beating the entire thing with one credit shows you not only the true ending, but also what your character does after game is over, meaning there’s a lot of replayability. 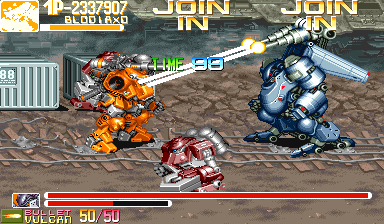 There are seven stages, broken up into acts. The first starts in a deserted town that has been reduced to rubble, and ends with your first boss fight against Azrael and his WARLOCK mecha. The second continues in the same location, before taking you underwater for a boss fight with Agmiss, a robot octopus. Stage three is set in the LA scrapworks, with the first area being a very fun side-scrolling shoot-em-up, returning to normal gameplay just in time for you to take on Rad, a gigantic blue tank. A Raian jungle provides the setting for the fourth stage, followed by the ruins of an ancient city and two huge gorilla-esque mechas. And that’s just act one, as you then dive deep into the caves of the city, for a showdown with Scull, a massive metal scorpion. At the beginning of mission five you must fight an upgraded WARLOCK, before riding down a rail track to take down a train, shoot-em-up style, and then facing the boss, a mecha named Helion that can transform into a helicopter. The sixth stage is an attack on the enemy base, and your final battle with Azrael, with an even more powerful version of WARLOCK. From there, the last stage tasks you with bringing down the enemies’ escaping battleship, blowing up parts of the craft enroute to facing Mother Brain (no relation to Metroid), a brain in a mecha with robotic dragon heads.

The music was composed by Anachey Takapon, who had previously done the Vampire: The Night Warriors soundtrack, and would later put together the tunes for X-Men: Children of the Atom, Marvel Super Heroes, and Street Fighter Alpha 3, among others. It’s another highlight of the game, all synthesized hard rock tracks that keep the adrenaline pumping, and was popular enough to receive a CD release in Japan on the 1st of December 1994. The sound effects are suitably meaty, with crunchy explosions and the rattle of artillery fire.

Armored Warriors was released worldwide on the September 18th 2018 as part of the Capcom Beat ‘Em Up Bundle for Xbox One, PlayStation 4, and Nintendo Switch, with a later release on PC. Released digitally, with other games including Final Fight, Captain Commando, The King of Dragons, Knights of the Round, Warriors of Fate, and Battle Circuit, the bundle contains an extensive range of original design documents. You can choose between the English or Japanese ROM of Armored Warriors, as well as adjust the wallpaper that fills either side of the screen when playing.

Rash is named Jin in the Japanese version of the game, a name he’d carry on to the quasi-sequel, Cyberbots: Full Metal Madness, a one on one fighter that was released the following year. The S-008 SUPER-8 in Cyberbots is based on Agmiss, the boss of the second level.