Tecmo is one of the more bizarre semi-famous Japanese game companies. Back in the golden age of console gaming, they didn’t have too many properties to their name, but what little they had were time-honored classics. Before Ninja Gaiden was reimagined as a high-energy action game, it was an honored action-platformer trilogy on the NES (and an arcade beat-em-up even before that). Yet as with any company, there are those games that just fall through the cracks for whatever reason, and aside from a single game and maybe the occasional modern cameo, they were quickly forgotten. One such title in Tecmo’s vaults is the ostentatiously named Tecmo Knight, a Double Dragon-style beat-em-up where Tecmo was ballsy enough to wedge their name into the main title at the risk of appearing conceited; It’s also known as Wild Fang (named after the villain) within its native Japan. Whatever the name, it is unfortunate that very few games match its raw ferocity. 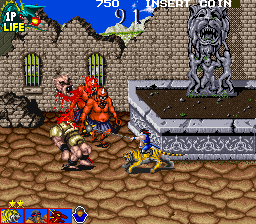 You know you’re in for a real hootenanny when you behold the disturbing intro, depicting a demon tearing off a man’s arm as he eats his head and a goblin holding down a woman before driving a dagger through her skull. The shaded burning visage of Wild Fang burns as the Tecmo Knights leap up and prepare to kick butt or get their butts kicked as thunder and lightning pierces through the darkness. It’s horrifying yet enticing all the same, and if Midway could tell you anything about the arcade release of Mortal Kombat, violence is a good way to sell your game. Pop in a quarter and start whomping on monsters, only to see their heads become absolutely coated in blood after you hit them enough. Very few other beat-em-ups would show this extent of body damage, save for Splatterhouse 3 to come a few years later. Hit them more and their heads fly off and melt into gory puddles as they splat on the ground, leaving behind a clean demon skull for you to collect. 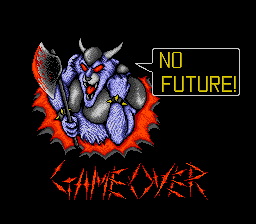 There’s more to the graphics than just bones and flesh being scattered about everywhere. The monsters are fantastically ugly and well-animated, and the backgrounds consist of ruined Mesopotamian buildings and landscapes out of a Robert Howard yarn. Tecmo Knight looked great for its time, with the game-over sequence being the icing on the cake: A gigantic pair of jaws slowly clamp down on your hero and they let out a death scream when the countdown gets to 1. If the mouth closes entirely, a wolf demon tears out of a black screen and tells you “NO FUTURE!” in one of the most awesomely bleak guilt trips to make you feel bad for having walked away. This game literally bleeds style, and the musical department is no slouch either. Despite the somewhat limited sound hardware, the game’s soundtrack is memorable and diverse, with the first stage music sounding like what you’d hear during a grand colosseum fight and the second track running on a primal drum beat. 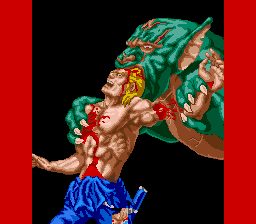 Some games focus more on how they look and sound rather than how they play, and Tecmo Knight could be said to be in this sort. Its gameplay is still cohesive, even if it was released the same year as Final Fight whose smooth-as-butter gameplay made TK look slow in comparison. Still, it does have an interesting gimmick which has only been rivaled by SNK’s first two Sengoku games: Transformation. As a Tecmo Knight, you are unfortunately a wuss; every single monster in the game dwarfs you by at least three times your size and your sword is like a toothpick taking on an army of tanks. Do not fret, as you have an awesome steed which changes between two forms normally and has a super-powered third form. By default, you start out on the hulking Smokeman, a giant whose punches and kicks do considerable damage yet are lethargic. The change button allows your mount to become the Tiger, who is faster and grants you longer range attacks using a spiked ball, albeit each strike is less powerful than Smokeman’s attacks. Some situations are better for the Smokeman and others for the Tiger, but It’s advantageous to switch your characters every now and again for the brief invincibility window you get for each transform. By default, you can only change three times as indicated by the number of stars above the image currently representing your ride, though some enemy skulls give you more stars when picked up. Other enemy skulls just give you points, and the occasional headbone gives you a 1-up, but the real prize is to find the Dragon orb from a vanquished foe. Grabbing an orb automatically transforms your beast into the red flying Dragon, which is essentially Tecmo Knight‘s equivalent of “God Mode”. The dragon is invincible as it flies around, spitting out lightning beams that obliterate whatever they touch in a single hit. This state lasts for about fifteen seconds before it morphs back to normal, so make good use of your dragon time. 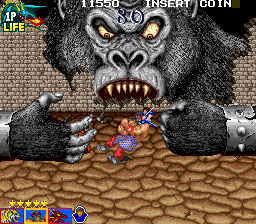 While it would be nice to be a Dragon forever, orbs are rare and you’ll mostly be sticking to Smokeman or Tiger. You don’t really have too many fancy moves, just your main standing attacks without any sort of throws or kicks while jumping. Combat in Tecmo Knight may feel a bit stiff and lacking compared to its contemporaries, but it does at least have a unique mechanic with the ability to leap on monsters’ heads and wail away while straddling them. Smokeman rains down punches like a schoolyard bully, and Tiger keeps rolling with its claws around a baddie’s neck until it severs the head. You can potentially bounce from head to head if enemies are bunched up close enough, and it can be harder (though not impossible) for enemies to hit you when you’re mounting them. There’s another interesting gameplay quirk that rarely shows up; if you’re lucky, a weak attack may kill your mount but not the actual Tecmo Knight, so you get to control him on foot. He has the ability to throw infinite swords, though the act of throwing seems pointless considering the short range of their flight path. He can even jump on enemy heads and slash away, but he only takes one or two hits himself before dying. Being reduced to the Tecmo Knight is a last resort that the game seldom gives you a chance to use, but It’s still possible to do some damage in this form. 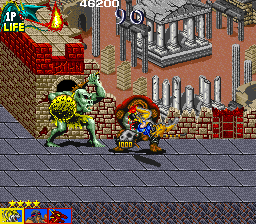 The enemies can sometimes be a bit overwhelming to face when there’re three or more, but if you can keep your distance and strike at the right times, you’ll be able to keep them under control. Basic enemies include cyclopean and dog-faced grunts, minotaurs which bum-rush you with their horns, turtle demons which attempt to jump on you, fire-breathing lizardmen, and lanky frog beasts which toss bombs. The toughest regular enemies are trolls, which lumber around quickly for their size and bash you with their clubs, and their shields seems to grant them a higher constitution. Furthermore, no less than three times are you accosted by a gargantuan gorilla which smashes you with its fists, each of which is roughly the size of the Smokeman. This monkey is ironically bigger than all of the actual bosses, though they’re all quite sizable on their own. Expect to fight towering birdmen, slithery snakewomen, centaurs which make creepy noises, double-faced reptilian boomerang throwers, and the big bad himself, Wild Fang. All bosses except for the final one come in pairs, regardless of whether or not you’re playing in two-player mode. When you consider this imposition combined with the fact that you get kicked back to a checkpoint if you lose all your lives in one-player, TK is definitely best enjoyed with a friend, as is the case with most beat-em-ups. 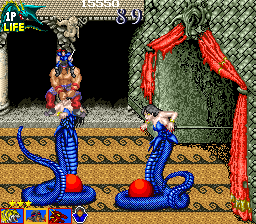 Tecmo Knight has a unique appearance that’s as barbaric as it is gruesome, though its aesthetics arguably overshadow its gameplay. It’s still quite playable even if nothing too flashy, but its combat is still competent and encourages you to play it safe when fighting multiple baddies. It’s also quite a short game at five levels. Tecmo Knight is definitely worth a play if not just to see how it looks in action, like Golden Axe infused with large quantities of Conan-style grit and bloodshed. It’s also the closest the arcade Ninja Gaiden got to a spiritual successor, which makes one wonder why Tecmo Knight didn’t go on to be as super-famous as Ninja Gaiden did. Tecmo Knight is so brutally audacious that following it up with anything would be unworthy to the original’s magnitude, so maybe It’s only fate that the game had NO FUTURE!