Developed in 1985 by Taito, The Legend of Kage (pronounced “kah-gay”) does its best to replicate the fast-paced, high-flying action of a ninja martial arts movie. The game is remarkably cinematic for its era – it begins when princess Kiri is whisked away by evil ninjas, and Kage drops out from the trees to save her.

There are only two buttons – to toss shurikens and to swipe with your kodachi – so you jump by pressing Up. Kage possesses incredible jumping strength and can leap the height of the screen. You can toss shurikens in practically every direction, which is a necessity, since enemy ninjas pop out from everywhere. 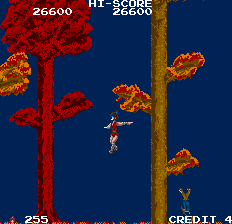 Shurikens are great for long range attacks, since they’re fast and versatile, but your kodachi is much more suited for melee combat. However, your sword swipes have almost no range, so you really need to be on top of a bad guy before you can kill them. Running into enemies won’t hurt you – they have to hit you with an attack before you’re killed. Unfortunately, they can attack as quickly as you can, and a single errant shuriken tossed from off screen can send your dead body plummeting to the ground. You can also block shurikens with sword attacks, if you’re fast enough. However, your parries won’t do any good against the nasty fire-breathing monks, who can also survive multiple hits.

While the high speed can occasionally make the game feel frustrating, The Legend of Kage truly excels due to its frantic pacing. There are only five stages, and the game takes only a few minutes to beat, but the action is constantly changing from level to level. In the first stages, you’re running from right to left, leaping gracefully from treetops. In the next, you’re rummaging through the castle moat, dispatching a certain number of ninjas before you proceed. Then, you’re caught in a vertical ascent to reach the entrance to the castle. 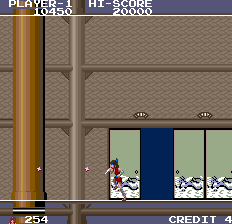 Once you’ve finally infiltrated, you dash up several sets of staircases before finding the princess and cutting her bonds. You take her hand, dash up to the roof and fly off, only to be met by an assailant when you hit the ground. Once you beat them, you’re temporarily victorious, but then the princess gets carted off again. Thus, it’s off to start the adventure anew, although the graphics have changed to reflect different seasons. This repeats until you run out of lives, although the arcade version rewards you with a victory scene after beating it twice.

The NES port is reasonably decent. The graphics and sound have been downgraded, but the gameplay has been replicated admirably. However, the speed isn’t quite up to its predecessor – the shurikens don’t travel as fast, and the game only allows two on the screen at the same time. However, there’s now an item that can power you up, enhancing your force and speed. It also lets you absorb a single hit, except against the fire breathing guys.  There are also a few extra bad guys and a handful of secret score items, plus you need to beat the game three times instead of twice to see the ending. Also, the arcade game featured a butterfly during the boss fights. It was just a cool touch in the arcade version, but in the NES version, you need to destroy it before you can do any damage to the boss. 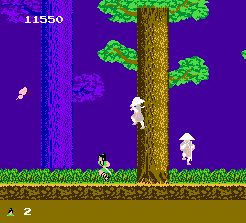 The Legend of Kage isn’t particularly well-regarded amongst Western fans, but that’s mostly because they’re only familiar with the game in a console setting. The short length makes it far more suitable for arcade play, and at home, it just feels simple.

The Commodore 64 version has blocky graphics and extraordinarily slow gameplay, resulting in a huge pile of crud. The theme song plays during the intro, but the actual game is silent. The MSX version features ugly, single character sprites, erratically colored backgrounds, terrible controls, and awkward scrolling. The Amstrad version is alright – the stick figure characters look silly, and it’s still relatively slow, but it’s playable. The Spectrum version has bright, oddly colored backgrounds and black sprites. Despite some choppy scrolling, it actually runs at a decent speed, though it completely lacks music. The Sharp X1 Turbo port by SPS has choppy animation and scrolling, but it looks and sounds better than the European ports. 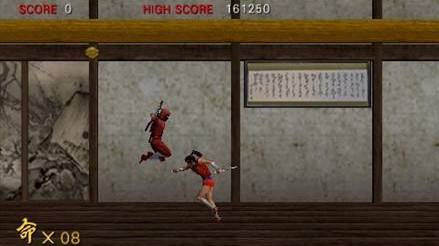 After appearing on some Taito arcade bundles, like Taito Memories Joukan for the Japanese PS2 and Taito Legends 2 for the PS2/Xbox, The Legend of Kage also shows up in Taito Legends: Power-Up for the PSP. In addition to the emulated arcade version, there’s an upgraded version featuring 3D graphics. It is, however, terrible. It’s much slower, and controls much worse, too. It also looks very bad – the quickly cycled 2D animation of the original had an amusing charm, but it looks really, really lame when rendered as a 3D model. Also, the horizontal widescreen of the PSP completely screws up the proportions of the playing field, and it’s hard to see anything above or beneath you. 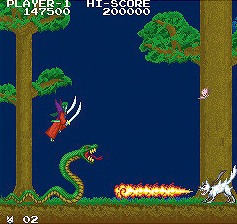 The Legend of Kage is also featured on Taito Nostalgia 1, part of the Let’s! TV Play Classic series of plug-and-play games, which includes faithful ports of arcade classics along with an exclusive bonus mode. For The Legend of Kage, this includes two new playable characters – Ayane, a female ninja who can throw bombs, and Ganin, a fire-breathing dog. There’s also a new boss, a gigantic, slithering cobra. 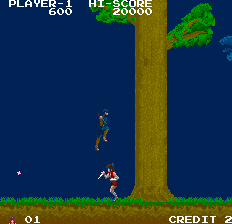 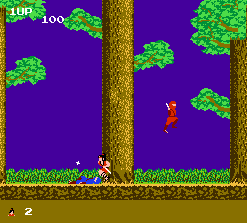 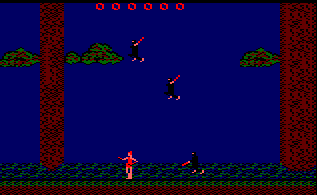 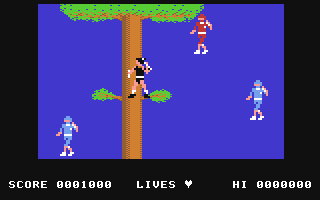 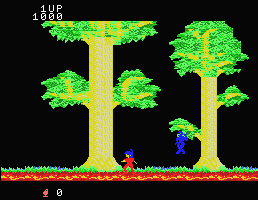 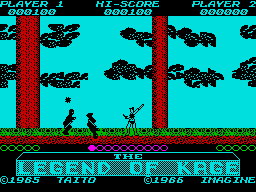 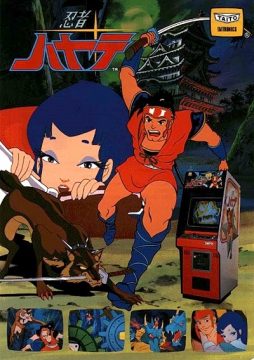 In 1984, Taito developed an animated laserdisc game in the arcade called Ninja Hayate. It’s basically exactly like Dragon’s Lair, in that you need to hit specific directions on cue with the onscreen action in order to survive. It details the story of a young ninja and his quest to infiltrate a castle to rescue his girl. In exploring the castle, he needs to avoid its many, many traps. The plot and characters look remarkably similar to The Legend of Kage, but despite sharing the same publisher, the games are not technically part of the same series. Still, they pretty obviously seem related. Ninja Hayate was ported by Wolf Team to the Mega CD, and released in America for the Sega CD under the title Revenge of the Ninja. It was also ported to the PlayStation and Saturn as part of a bundle with Time Gal, another Taito FMV game.