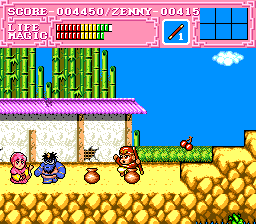 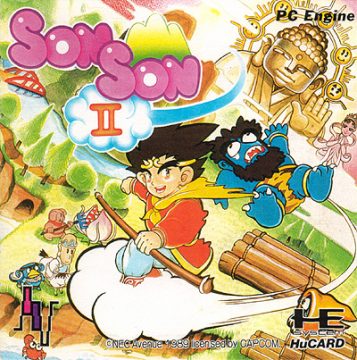 Capcom’s barbarian-themed arcade game Black Tiger was scheduled to be ported to the PC Engine at one point. However, sometime during development, it was decided to create a whole new title, using Black Tiger as its base. They looked towards Capcom’s 1984 action game SonSon, which was based on the Monkey King legend, and used that game’s characters and setting to create SonSon II. 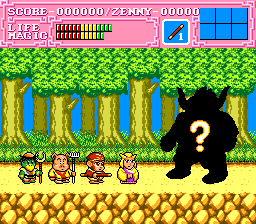 The game opens with all of SonSon’s buddies being kidnapped by a mysterious creature (it’s literally a large shadow of a beast with a gigantic question mark in the middle, though it’s meant to be Gyumao the Ox Demon King). This is the only part of the game that even remotely resembles the original SonSon, which had a similar intro.

From here on out, it’s pretty easy to see where the parallels to Black Tiger are. It uses the same sprawling open-ended level structure (though compact enough so it doesn’t need a map), complete with vines/poles to climb, though they’re a bit longer and are typically broken up into a few different areas. Enemies drop fruit, which are still calculated as “zenny”, used as the currency for when you find certain characters on the map, who will open up their shop. Many enemies are similar, including the slimes that drop down from the sky, the spinning head coins, and the man-eating plants that pop out of the ground. And your max stats increase when you hit certain score milestones.

However, there are still some substantial differences. Perhaps most disappointingly, the hero only attacks with their Ruyi Jingu Bang extendable staff, missing the projectile attacks of the hero from Black Tiger. Friendly NPCs are less frequent, but most of them will open up a shop (and a few will give advice), whereas previously they’d give cash and other bonuses. Each shop is unique, containing four different items. You still upgrade your staff here, but each enhancement can only be found at specific shops (you can skip upgrades and find more powerful ones later, if you’d like). There’s no longer any armor to obtain (with one exception), though you can get life meter extensions with the Yashichi, the famous Capcom pinwheel item. There is a trading sidequest where, if you obtain the correct items throughout the course of the game, you can get a set of clothes to upgrade your defense. You still find items to increase your score, but they no longer extend your health. Poison abilities are gone, but enemies sometimes drop skulls, which will sap 100 zenny from your stash. 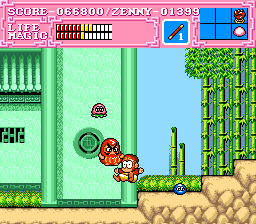 There are several magic spells to purchase, which are selected when you pause the game. Defensive spells (like shields and time stops) are used automatically, while offensive attacks (peaches, bombs, and screen clearing thunder zaps) are awkwardly executed by pressing the II & I buttons together. (Why not use Up + Attack, something that had been established in previous NES games like Castlevania or Ninja Gaiden? It’s not like you can attack upward with your staff in this game.) Hidden items can still be found by smashing the scenery, but you need to find a glove in order to break down the walls, and they disappear after a few uses. You can also find clouds, which are used automatically when you get into boss battles. Here, you’ll jump on board and be granted the power of flight, which generally makes the fight easier. Keys must also be found to unlock certain doors.

Black Tiger was known for its fairly high difficulty level. SonSon II is also pretty hard, though for entirely different reasons. On a moment-to-moment basis, it’s not nearly as tough – enemies are less frequent nor do they attack as aggressively. But at the outset of the game, you only have a single life, and no continues. Health restoratives are dropped by defeated enemies, but their appearance is infrequent, and beating a stage only partially restores your energy. You can purchase hearts to replenish your health, gourds to resurrect yourself on death, and magic lamps to allow you to continue. But when you’re expected to also upgrade your staff constantly, or risk being overpowered by simple enemies later in the game, it’s a constant battle for resources. There’s no onscreen time limit, but you can’t dawdle either, and after ten minutes in a stage, you’ll be harassed by an extremely powerful Raijin enemy, forcing you to hurry up. As such, it’s a game that’s frustrating not because the action is all that demanding, so much as it’s just really unforgiving.

That harsh demeanor felt appropriate for Black Tiger, given it was an dark fantasy, but the cutesy graphics of SonSon II make it seems more like a kid’s game, and it really isn’t. They’re bright and colorful, though the repetitive scenery and palette swapped enemies do show the limit of the game’s ROM space. The music isn’t anything special either. What is pretty odd is that the game text refers to the hero as “Son Goku” even though the character is supposed to be SonSon (the grandson of Son Goku, according to the original arcade game). In game, he also looks like an anthropomorphic monkey (as he did in the arcade title) but on the cover he’s a human kid, more like Goku in Dragon Ball. It doesn’t seem like anyone communicated these details to each other during its development. 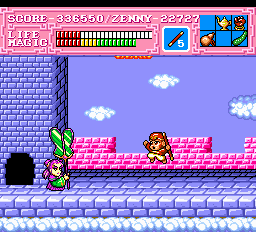 As a follow-up to Black Tiger, the structure and mechanics of that game made some kind of sense in the arcades but definitely needed some changes for a console release. So scaling back on the defensive items and focusing instead of magic spells and items makes more sense, plus the fact that you have a proper life meter and can take more than a few hits means that you’re not constantly in peril. But the game really could’ve given you more than a single life, or at least gave you some continues at the outset. (Alternatively, it could’ve made things cheaper, so you’re not just draining all of your money on health items.) It’s not a short game either, and can take nearly an hour to complete, so losing that amount of time for a single death is pretty rough.

The change in tone from Black Tiger is strange but not necessarily unwelcome, though since it has absolutely nothing to do with the original arcade game, it’s weird how they plunked a roman numeral on the end and called it a sequel. Was the name recognition from a cutesy 1984 arcade game really that high that it was needed to retrofit into a completely different title? Or perhaps Black Tiger (or rather, Black Dragon) wasn’t popular enough in Japan that it needed a new coat of paint for the PC Engine?

In the end, much like Black Tiger, if you can put up with the annoyances and you’re skilled enough, then it’s a pretty decent action-platformer, whose RPG elements help set it apart from the typical games of the era.