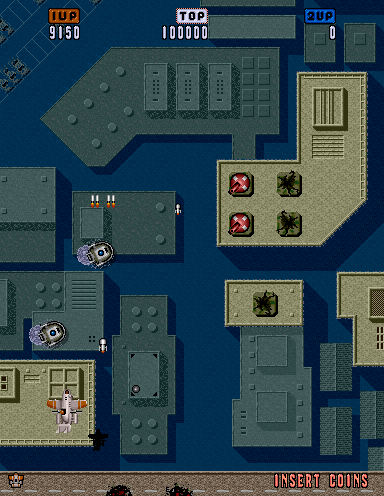 It’s difficult to do anything too original in the action genre of shoot-em-ups, ever since Xevious and Gradius set the bar for vertical and horizontal shooters, respectively. Hence, shmup developers have mostly refined the basic formula of “go forth and shoot crap” instead of redefining it. This is the case for Sega’s Scramble Spirits, an unassuming shooter that isn’t anything too original or outstanding but does well enough what it intends. This game draws a fair deal of its appearance from Capcom’s seminal 1942, one of the first shoot-em-ups that took place in biplanes over oceans instead of starships in space. In this vein, you play as one of two planes which take the fight against the invading enemy forces. Baddies come in the typical military machines: Planes, ships, tanks, turrets, you name it.

Your aerial fighters are armed with a semi-automatic forward-firing cannon and bombs which travel most of the screen before they drop. Both weapons are bound to the same button for greater convenience while fighting against air and ground units, but for the most part, this is all you get to destroy enemies. The only power-ups you receive are small helper planes that you blow out of dirigibles, and you can have two helpers at the same time. An interesting touch is that you can press another button to switch their position, either assisting you in firing forward or dropping bombs depending on where they’re placed. You can also press both buttons simultaneously to send your planes out as a screen-clearing bomb, and you can even pick them up again afterwards, although considerably damaged. Assist planes can be shot down by enemy fire, so enjoy them while you’ve got them. 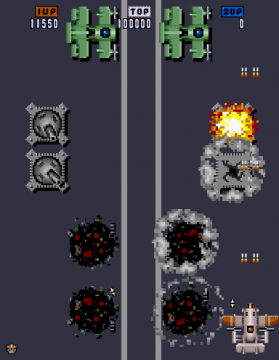 If Scramble Spirits wasn’t exactly the most innovative shooter of its time, it was definitely one of the best-looking. As one of the first games to run on Sega’s System 24 arcade board, which ran at a much higher resolution than the typical arcade game at the time, a ridiculous amount of detail was engraved into this game’s landscape. The colors are a bit muted compared to some of Sega’s more outlandish games (Dynamite Dux, anyone?), but this gives Scramble Spirits a more realistic feel than your average shmup. A particularly notable example of the System 24’s advanced technology occurs in the middle of the odd-numbered levels, wherein you find an enemy base full of destructible vehicles and resources. You engage in a bonus level where your plane flies down to the lowest possible altitude and the perspective fluidly zooms in on the ground and enlarges the plane sprite to compensate. At this point, you must shoot at as many of the ground targets as you can for points, which are tallied at the end of this segment. You cannot die during these zoomed-in runs, but shots can stun you and potentially prevent you from maxing the score. The graphics then seamlessly pan out as you return to your main mission. Back in 1988, this sort of scaling effect surely dazzled any who would behold it, even if it seems a bit gimmicky nowadays.

Besides this early example of sprite and background scaling, there’s also an incredible amount of detail put into the terrain below. The first level appears to take place in a flooded city as you observe highways intermingled with high-rise buildings, several of which are buried beneath the ocean. Rippling desert sands cover the second stage and you come to a giant rushing sandpit with a flower-shaped cannon in the center, which spits out multiple projectiles at once. The third level is particularly impressive, taking place in some sort of monastery with detailed roofed buildings, several Buddhist statues lined up, and the remains of a gigantic statue mostly sunken into the water. One of the most amusing details is how your support crew does all sort of silly stuff when your plane docks between levels, such as three soldiers playing jump rope or a whole platoon of them standing out to spell “NICE.” It may be somewhat stupid to wax on a superficial aspect like appearance, but it’s clear Scramble Spirits was made primarily with its appearance in mind, and it’s still an incredibly (if subtly) attractive game by modern standards. There’s much less to be said about the music, which isn’t bad but isn’t quite as memorable as the graphics. Still, the first and second level tunes are fairly groovy tracks, even though they lazily repeat on later levels. 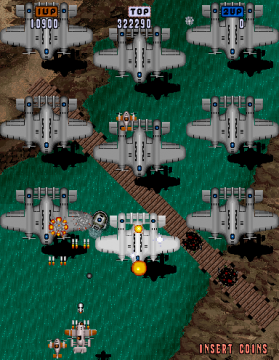 There’s definitely more to say about how Scramble Spirits looks than how it plays, but its gameplay is technically solid even if simplistic. It is, however, an expectedly tough game as shmups often tend to be, and you’ll likely get assaulted by enemy bullets midway into the first level. The bosses are quite tough, like a large blimp which splits apart to reveal three fighter jets that drop cluster bombs, or one massive red airship that fires out loads of projectiles and has some weird balloon shield, which absorbs your shots and explodes if hit too much. This game’s pretty difficult as it stands, and there’s an even worse factor that makes it particularly aggravating to actually beat: See, there was a time in the mid-eighties when arcade games would prevent players from continuing after a certain point, usually on the final level. Sega was guilty of this measure on Shinobi, ESWAT, and Scramble Spirits here.

So Scramble Spirits isn’t a very kind game when you get right down to it, but it’s hard to find any shoot-em-up that “plays nice.” Taking it for what it is, Scramble Spirits is perhaps more memorable for how it looks than how it plays, as it doesn’t offer a lot of frills besides old-school tough difficulty backed with an extra dose of bullcrap with the ending continue denial. If you can overlook its toughness, then what you have is an enjoyable shooter that plays fast and dazzles with its powerful hardware. Other shoot-em-ups in 1988 may have offered spicier environments and power-ups (like Konami’s Gradius II and Toaplan’s Truxton), but Scramble Spirits still stands out for its interesting visual style that even differs from 1942 and its sequels. Plus, simultaneous two-player support in any shooter is always fun, so get a bud and take to the skies! 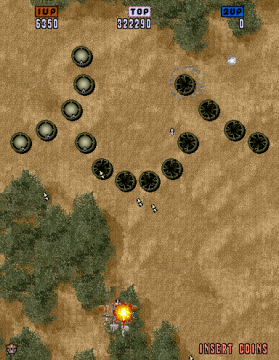 As with many of Sega’s mid-to-late eighties releases, Scramble Spirits was ported to several home consoles and computers, but it strangely received no port for the Sega Genesis/Mega Drive, which was released in Japan as the same year as the arcade version. There was at least a Master System release which accurately replicates the gameplay of the original and doesn’t do too badly with the graphics, though it can only do so much with its limitations. The Commodore 64 couldn’t replicate the scaling effects either and the sprites come off as looking quite blocky, but they do the job. The Amiga version fares better and looks decent in addition to enhanced music, though at the cost of sound effects. It also features a rather goofy looking pilot in the status screen on the right, a measure added to keep the aspect ratio roughly in line to the original arcade screen. The same is also true for the Atari ST version, which is virtually identical to the Amiga one, as well as the Amstrad CPC, MSX, and ZX Spectrum renditions. The 8-bit computer are quite identical amongst each other and play smoothly, but with the main draw of the arcade game being the mighty graphics, no home version quite snags the essence of the original. 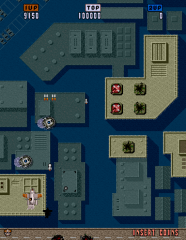 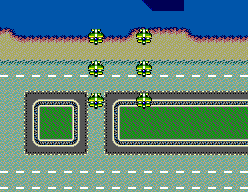 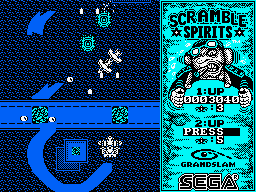 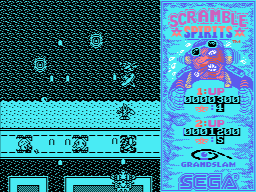 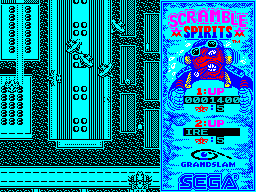