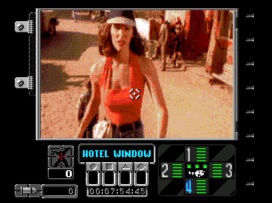 If any one company could be said to be at blame for the Sega CD being synonymous with the term “FMV Gaming,” Digital Pictures would probably be the first on the list. Responsible for the Sega CD launch title Sewer Shark, they also published the infamous Night Trap, its spiritual successor Double Switch, and the series of video-editing software titles known as “Make My Video” games, which time has been even less kind to. Ground Zero Texas built on its predecessors to deliver what Digital Pictures marketed as their biggest budget project yet; which isn’t hard to believe. Compared to the small casts of Night Trap and Double Switch, Ground Zero Texas is practically a full scale Hollywood production.

Set in a fictional town on the US-Mexican border called El Cadron, Ground Zero Texas focuses on an Invasion of the Body Snatchers-esque alien invasion. Creatures called the “Reticulans” have begun invading, kidnapping townspeople, and taking their place. As part of an insurgent military squad, the player is with controlling remote cameras at four locations in the town, each equipped with laser cannons. Since there’s no weapons currently capable of killing the Reticulans, the best the camera lasers can do is stun them.

There isn’t much depth at all to Ground Zero Texas, but it certainly keeps the player on their toes more than Night Trap did. Rather than sitting around waiting for things to happen, mere seconds pass before something major occurs in one of the four locations. Sometimes it’s a story event, sometimes it’s a clip of random townspeople going about mundane affairs(one of whom has to be gunned down as an imposter), but more often than not, it’s a repeated shooting gallery of the same four or five imposters in each location. The shooting is controlled entirely through the D-pad and A button, with the B button used to bring up a temporary shield, and the C button used to switch to the other three areas, paired with the D-pad to select them. One would think that the ill-fated Menacer light-gun would’ve worked well for this experience, but no support was implemented. The only real difficult parts are shooting certain townspeople during story sequences, since the targeting region can be extremely small and hard to hit within the span of a few seconds.

Defending each area is where Ground Zero Texas gets extremely tedious. Each time a location gets attacked, it has to be defended until all the imposters are gunned down. If multiple areas come under attack at once (which happens more often than not), then the player has to multitask. Each area has a shield, but they never last long, and if the fourth area (the Hotel Room HQ) gets gunned down, it’s game over. Although the other three cameras can get repaired, if they go down more than three cumulative times, they’re beyond repair, and the game ends. The third (and most amusing) way to end the game is to shoot more than three innocents during any point in the game, whether during a shooting scene or even a random story sequence. This leads to the commander of the operation kicking down the door to the player’s control room, and punching him in the side of the head; while screaming “I don’t want the likes of you watching my back! The chopper’s waiting! YOU’RE DONE!” Later on, when the player finds upgraded weaponry that can actually kill the aliens (and their robotic stormtrooper henchmen, called into play when things really go to hell), any single shot to a human will end the game.

Since many sequences in the game have alternate outcomes (such as different possible townspeople being the imposters), it has a fair amount of replay value, but not nearly enough to make up for the chore of actually playing it. Still, none of the acting is especially abysmal; it’s campy at worst, and some of the story scenes are genuinely amusing, such as a squad of FBI agents investigating smugglers of drugs and drug money throughout the events of the game. Its relative classiness can attributed to Dwight H. Little, a B-list director known for the likes of Rapid Fire, Marked For Death and Halloween 4, which is the FMV game equivalent of hiring Spielberg. Furthermore, one of the (several) writers responsible was Edward Neumeier of Robocop and Starship Troopers fame.

There’s not much else to Ground Zero Texas, besides a brief investigative sequence in the second chapter. During the first chapter, key events will have an alien attack each area’s operative. If the player saves them, they get one number of a four-digit code. The code is required to find the alien’s hideout and get access to their weaponry. Without the right code, a nuke blows El Cadron skyhigh. If it weren’t for the extremely repetitive gameplay, Ground Zero Texas would make for a fun (if campy) short-lived experience, as most decent FMV games do. Instead, the tedium involved will more than likely lead to someone giving up the first time a fluke misfire or overwhelming odds leads to the game over screen.

Interestingly, the game also had a relatively high budget of two million dollars. There’s an interesting quote from Ken Melville, Digital Pictures co-founder, about the video quality. “All our video had to be tortured, kicking and screaming, into the most horrifying, blurry, reduced-color-palette mess imaginable in the Mega CD. I shudder to think about it.” This quote is baffling in any context, considering the company had already released more than a few games on the platform, and was well aware at how crappy their games would eventually end up looking. So why was so much money poured into something that was not only an aggravating game but would undoubtedly look terrible? Such was the irrational exhuberance of the burgeoning multimedia era of the early 90s.