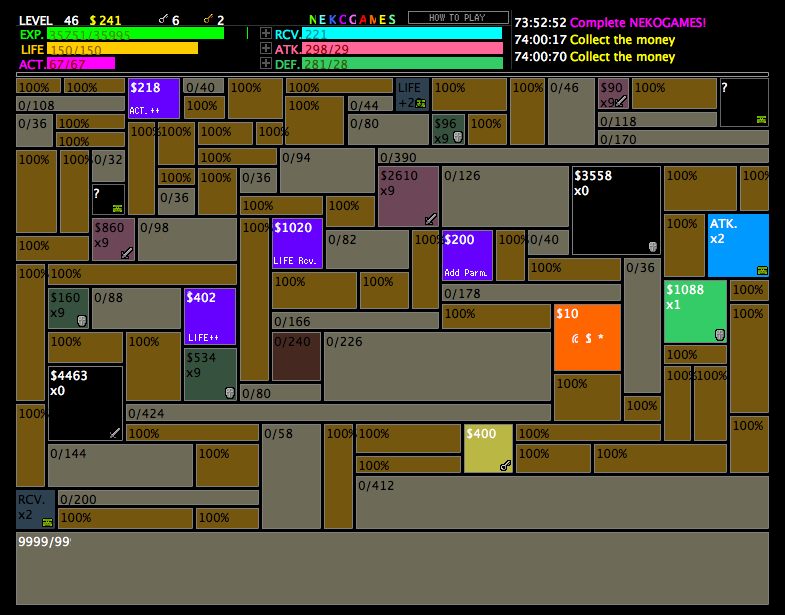 Parameters by NekoGames (AKA Yoshio Ishii) is a Flash-based JRPG built from nothing but boxes and numbers. You could start playing it right now and finish in 30 to 40 minutes. Please do so. Then ask yourself: Is Parameters a withering criticism of that JRPGs, or a minimalist monument to that genre’s greatness? One could spend more time pondering that than actually playing the game.

If you’re even aware of this website, you already know the backstory. JRPGs, once the cause of celebration of console-dorks, are now a guilty pleasure at best. Even the genre’s diehard, 3DS-toting fans will sheepishly admit there’s something a little unsatisfying about a game where the only way to lose is to give up out of boredom. Grind for experience or gold until you can go fight the X or buy a Y. It’s not particularly different from work, except the paychecks are fake. 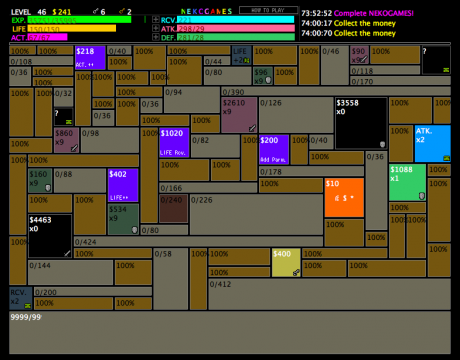 Parameters boils the JRPG down to box-clicking. The game world fits on a single screen, a static grid of about 120 boxes of various sizes. Orange boxes have hit points assigned to them. Those are monsters. Other boxes have a percentage value. Those are quests. Stores are just boxes with weapon icons in them.

The game could be more accurately called “Stats.” You fight monsters by repeatedly clicking an orange box until one of you runs out of hit points. Your LIFE stat – and the monsters’ – regenerates at a speed dictated by the RCV (recovery) stat. If you lose, it’s because your ATK, DEF, and/or LIFE wasn’t high enough. Fighting the same orange box again will have exactly the same outcome unless you first raise your stats by completing quests, fighting weaker orange boxes, and/or spending money on stat-upgrades. Toward the end of the game (the 30 minute mark for most players) stronger orange boxes will throw your RCV stat into the mix, since the only way to defeat these “bosses” is to regain your LIFE and ATK faster than they do. That’s about it. 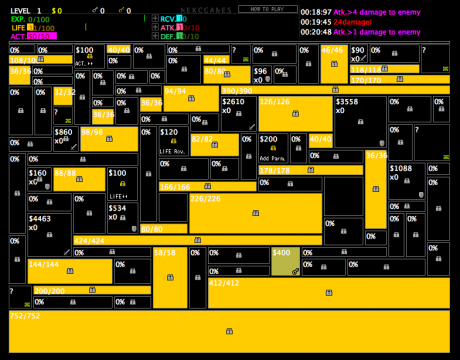 The end result is a short and disturbing game. Disturbing because, despite being intentionally and blatantly tedious, it’s also addictive and fun. Millions of years of evolution have programed our brains to crave incremental achievement and reward. So long as the next goal is within our grasp, we feel compelled to keep moving. Like all games, Parameters is jerking off our primal, hardwired addiction to visible progress. Unlike other games, Parameters is honest about it.

But then, it is fun isn’t it? A lot of much more complicated games aren’t, you know. Although Parameters is brutally upfront about the crude, grind-till-you-win ethos of all JRPGs, the fact that it remains fun shows there is some craft to the genre that separates good from bad. What that craft is, I couldn’t tell you. Once the dopamine has seeped into your prefrontal cortex, does it really matter how it got there?