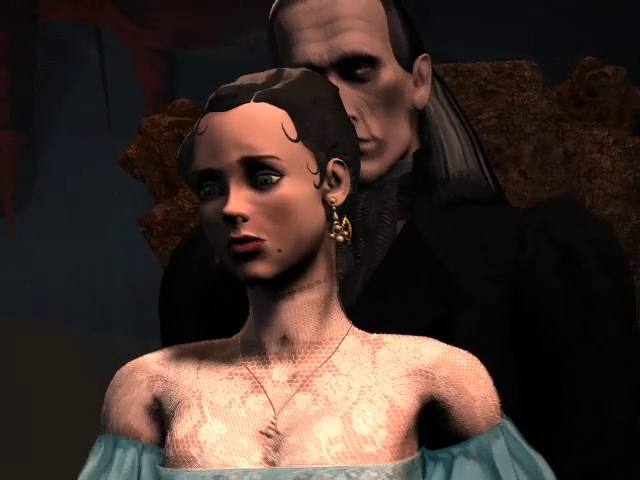 The Dracula series of 3D Adventure games has a curious pedigree.  With an un-searchably common title, and differing publishing and development teams over the years, it’s impossible to give them a convenient label to let people know which games you’re talking about! The series began with Dracula: Resurrection in 1999, and continued to Dracula 5: The Blood Legacy in 2013. While the series nominally has five titles, the first and second are just episodes of a common game, and the same is true of the fourth and fifth. Dracula 3 is standalone, making a total of three umbrella releases in total.  Due to the wildly different development teams and the years between releases, each of the “three” feel very different, united mostly by a common interface and occasional plot connection. 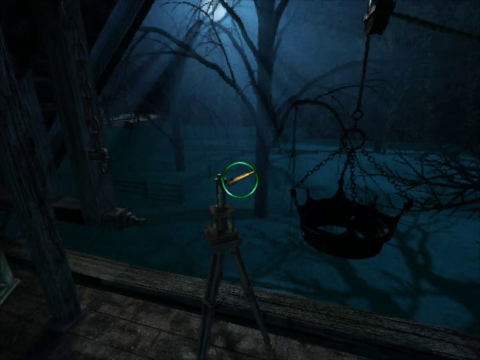 The original two games cast themselves as sequels to Bram Stoker’s original novel, though they’re the sort of sequel that repeats as much old content as possible. Dracula is back from the dead, and has again taken control of Mina Harker, drawing her to his Transylvanian castle. Her husband Jonathan will once again have to visit a village full of superstitious Transylvanian natives to locate a castle he suddenly can’t find any more, will face the three vampire sisters that were supposedly destroyed in the novel, and then returns to London to rout Dracula’s old hideouts, meet an insectivorous man who works for Dracula but has a different name this time… it’s all very familiar.

The first two games have a strange contrast of camp and generally competent horror atmosphere.  The early 3D character models border on both, but others aren’t so ambiguous: Dracula’s actor is doing a Lugosi impression that ranges on parody, the vampire sisters start doing ballet and gymnastics in the background when they try to talk, and who knows why some of these strange decisions were made.  But at other times, you’ll walk down dark and haunted hallways, expose a hellish underground prison, and face horrible nightmare trials for nascent vampires. The theming is in every direction at once. 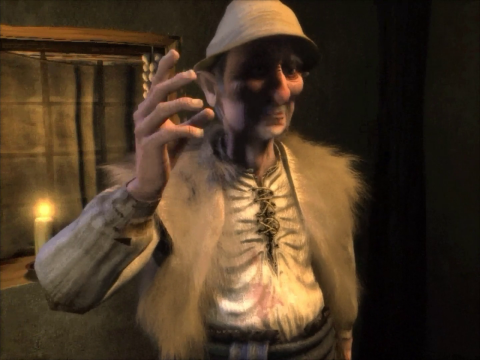 Controls are similar to Myst III and IV, though the games predate those particular titles. The player moves through the environment from node to node, each represented by the inside of a pre-rendered semi-sphere that you can explore by pivoting in place. Even the game’s save and load screens take place in this spherical environment.   Because they’re pre-rendered, the spheres are also static: changes are largely restricted to items being added or removed as puzzles are solved, and in-sphere animations are rare to the extreme, which takes away from the game’s otherwise quality horror atmosphere. Unfortunately, Jonathan does little to comment on his environment, even in situations that would benefit from some clarification, and the game conveys most of its information with a set of frankly unhelpful icons.  One icon indicates elements you can interact with, another for item-to-item hotspots, and so on. A particularly unhelpful icon depicts a red circle and slash, like a “No Smoking” sign, which indicates an element you can’t interact with for the time being: this particular icon almost always appears without explanation, and is extremely arbitrary. More often than not, it seems to exist to prevent you from getting into situations the developers hadn’t bothered to render, such as entering a darkened node without a light (despite it not looking so dark), or in one instance, to avoid placing an item that would cast different reflections than they intended.

Unlike Myst, the player has an inventory that they can access via right click, which features a ring of your collected objects.  Unfortunately, despite the icon system pointing out all inventory puzzles, the game has several pixel hunt situations, and the logic behind the puzzles can range towards the bizarre, as often mocked about late 90s Adventures.  One early puzzle involves calling one of Dracula’s servants into a trap: you have to go far away from him, discover a telescope stand, set the whole thing up, and then call him with music, which can only be done via a hotspot inside the telescope view.  Another extended puzzle sequence refuses to start unless you put a mirror into an innocuous niche in another side of the room, with no mechanical connection whatsoever. 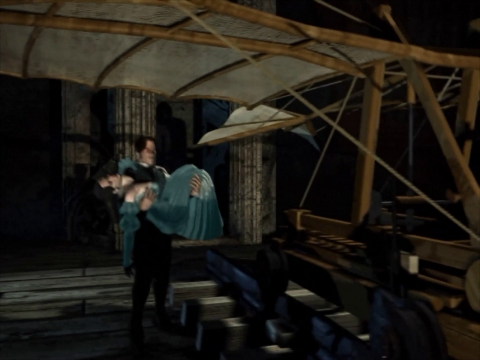 As previously mentioned, character models have a jerky sort of animation, but this comes across as a limitation of the era and possibly a matter of style.  Unfortunately, the models also have several out-and-out problems.  The extremes of their mouths frequently fold in on the rest of their faces, especially the models for the innkeeper in the first game and Mina in the second. The old man in the first game is particularly bad, the developers seemingly unwilling to move his lower torso, and so the vertices above that point warp back and forth while his waist stays perfectly still.  This is combined with an awful sense of cinematography that prefers extreme closeups of the eyes, possibly to spare the animations time and trouble, but in a way that’s hardly laudable.

The first game is roughly divided into four major sections: the village, the quarry, the castle and the keep. The first and third are relatively free-form: first, Jonathan must find his way to the castle while dodging three of Dracula’s henchmen, a relatively traditional Adventure experience that holds up well outside of the previously-mentioned telescope puzzle. All of the castle’s gameplay threads come together in a multi-step puzzles in the library that feels quite rewarding if you can manage it.  The quarry and keep sections, meanwhile, are linear and brief, including a disappointing finale.

Moving on to the second episode, the so-called “sequel,” there are only minimal gameplay changes. The first game refuses to kill you at any point, but the sequel is happy to. There are a few instances of instant death (generally with some warning), but most dangers use a timer that appears at the top of the screen, giving you a few seconds to fix the situation before you’re cut down.  Dracula 2 also modifies the inventory. You to carry various documents that can be read up-close (with optional voiceovers), and you can combine items in your inventory.  The game won’t let you combine anything willy-nilly, however: alongside your ring of items, you now have “combinable” items that appear on the left and can only be used on other inventory objects, and not in the environment. This can lead to oddball situations, like an early puzzle where Jonathan refuses to put a candle on an obvious candlestick unless he’s already lit the thing in his inventory, but they’re generally less silly than that. 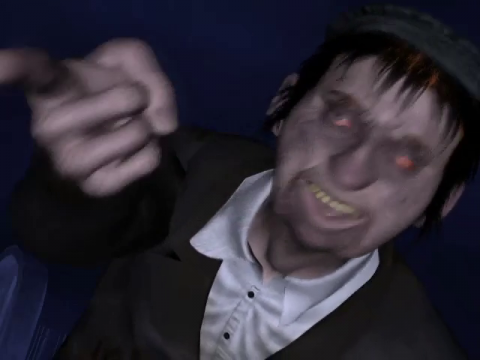 The sequel takes Jonathan and Mina back to London, where, in a pathetic excuse to create puzzles and avoid renderign crowds, Jonathan insists on trudging through the sewers instead using the London streets.  The game starts at Dracula’s former manor at Carfax, where Jonathan will end up battling some of his bat-human minions with a few light puzzles, and carries on to Dr. Seward’s asylum, a completely inaccurate rendering of Highgate Cemetery in London, and beyond.  The game reaches its “so bad its good” apex during a sequence in an early film studio, where Jonathan is chased by a Dracula robot stuck in a T-pose, a robot somehow capable enough to follow you up into the rafters, yet not capable enough to ever actually kill you like everything else in the game.

Eventually, you return to Transylvania and pick up some loose ends set up in the original game.  The game ends in the titular Last Sanctuary, its atmospheric and thematic high-point, but also a warren of pixel-hunting nonsense.  Jonathan has to complete a series of trials for a nascent vampire, an idea the third game would explore in greater depths, before the final, disappointing showdown with Dracula.  While the atmosphere in the second game is leagues better than even the first, bad puzzles are more common, and the whole thing feels a little undercooked.

All-in-all, the first two Dracula games form a camp classic.  The atmosphere is fantastic, and some of the puzzles are good, but the genre-wide failings of the era are a millstone over the game’s neck.  A light-hearted appreciation of its faults, and maybe a walkthrough, can help the modern player appreciate an ambitious, but ultimately flawed, duo from the dying days of the Adventure game golden age. 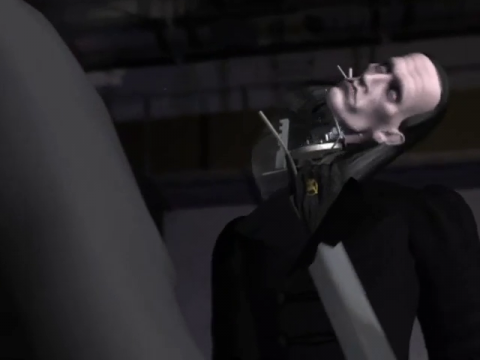 In addition to Windows and Mac releases, the two games were also ported to PlayStation. These versions are nearly identical, with the cursor controlled with the controller or PlayStation Mouse, but suffer from load time after every single action, slowing the games considerably.