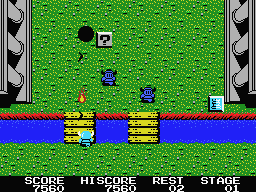 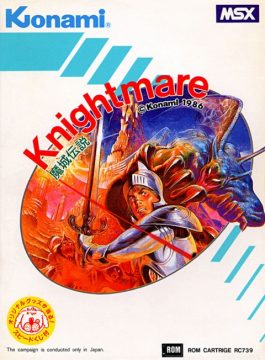 Majou Densetsu (literally: “Demon Castle Legend”, no relation to Akumajou Dracula or Dracula Densetsu, which are Castlevania games) is an overhead shooter that departs from the norm. Instead of piloting a ship through space, you control a little knight named Popolon as he fights various creatures in a setting inspired by mythological Greece.

At the outset, Popolon is armed with a bow and arrows. However, floating power orbs can drop additional weapons, including boomerangs, three way shots, and throwing swords. Many question mark blocks are strewn about, dropping chess themed tiles for other power-ups. Other power orbs can increase your speed, freeze time, grant temporarily invulnerability or invincibility, or provide a shield to protect against frontal attacks. 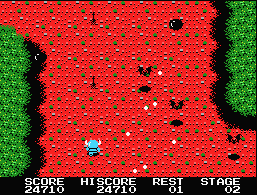 It’s a fun game, let down by some technical limitations. Like all of the other shooters for the MSX, the scrolling is very choppy and slow. That means shuffling up a whole screen takes somewhere around 30 seconds. The checkpoints are generously placed, but retreading old ground upon death feels like it takes forever. Still, it’s a great game with some nice music and cool boss fights. The version included on the Konami Game Collection 1 disk supports the SCC cartridge for better music.

A group called Friends created a clone of Knightmare for IBM PC computers. Though the scrolling is smoother, it’s still slow, the EGA graphics are worse, and there’s no in-game music.

Some fans also created a ROM hack called Knightmare Gold. This allows for support of MSX2 hardware, which makes the scrolling smoother, adds SCC capability, upgrades the color palette, and makes numerous other fixes. A CD version includes a remixed soundtrack with songs from many other Konami games.

There are actually two other games in the Majou Densetsu series, which are in completely different genres. The second, Maze of Galious, is a side-scrolling action-adventure for the Famicom and MSX, and the third, Shalom, is an RPG exclusively for the MSX.