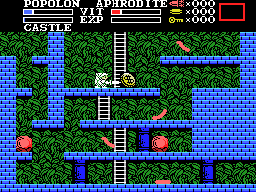 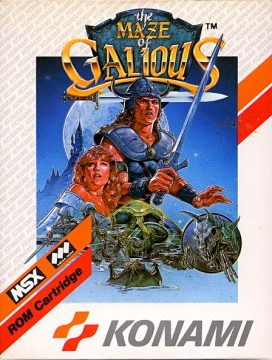 When Konami released Knightmare II: The Maze of Galious for the MSX on April 18, 1987, they were right in the middle of a ten-month, seven-game blitz of action-adventure titles. At this point, both the Famicom and the MSX were over three years old, and Japanese gamers were hungry for “deeper” gameplay. One year prior, in 1986, Japan got its hands on The Legend of Zelda, Metroid, and Dragon Quest, which guide the player with verbal and visual clues. But 1986 also gave Japanese gamers stuff like Sunsoft’s infamous Atlantis no Nazo, in which the primary challenge was finding someone else who could tell you where to find the next invisible key. Galious is somewhere in between, an uncomfortable marriage of Zelda’s RPG aspects, Metroid’s stage design, and Tower of Druaga’s inscrutable puzzles. 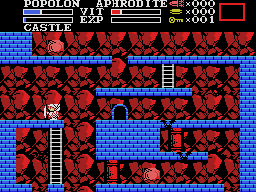 The story picks up right after the original Knightmare: Popolon and Aphrodite, having just defeated the “dark overlord Hudnos,” return to their home, “Castle Greek,” and find it overrun with demons. Worst of all, the evil priest Galious has stormed the gates of heaven and kidnapped our heroes’ yet-to-be-conceived child. Popolon and Aphrodite must reclaim their castle, one world (?) at a time before squaring off with the goat-wizard to save their future-baby.

From the beginning, the player has control of both Popolon and Aphrodite, who look and play nearly the same. Popolon can break boulders faster and jump a bit higher, but can’t swim; Aphrodite jumps at a consistent height and can fire more projectile weapons than her lover. The player can toggle between the characters at any time, and will need to do so often to navigate the maze.

Although the game is a platformer, it is organized almost exactly like Legend of Zelda. Entrances to the game’s ten dungeons are hidden throughout Castle Greek, which functions just like Zelda’s overworld. The heroes gain stamina by defeating bosses, gain strength by upgrading their sword and shield, and gain new abilities by collecting an arsenal of special items and weapons. Enemies drop money that can be spent in shops, arrows that fuel all five of your projectile weapons, and generic keys that open locked gates.

Killing enemies also adds to a character’s “experience” gauge which, when full, refills that character’s health but serves no other function. The only other way to heal a character is to enter one of three special rooms in the hub-world that feature rainbow-colored magic dust motes. If the player stands in exactly the right spot (which is not indicated in any way) for five seconds, the dust congeals into a life-restoring fairy. If either Aphrodite or Popolon dies, the only way to revive them is to retrieve a pile of salt from the hellish bowels of the castle and bring it to Death’s Shrine. Progress can be saved by getting a password from Demeter’s Shrine. There are no continues unless a secret code (Z-E-U-S) is entered on the first screen, which will allow the player to restart with full health and no progress lost (breaking the game completely).

Like Zelda before it, Galious turns each of its ten dungeons into their own sort of mini-quest, culminating with a battle against that world’s “Great Demon.” In addition to a map, every dungeon contains three hidden items to aid the player: the Cape, which decreases damage taken from boss demons; the Rod, which grants unlimited ammo during the boss battle; and the Holy Water, which cuts the boss’s HP in half. Using the magnifying glass item, the player must inspect gravestones scattered throughout the dungeons until one of them reveals one of the ten Hebrew-sounding incantations — e.g., Elohim, Yomar, and Hamalech.* Typing the correct incantation in a boss room will summon the Great Demon.

That’s right, you type in this game. Although Galious does permit use of the MSX’s controller peripheral, it makes such full and frequent use of the keyboard that you’re probably better off controlling it that way, too. The arrow keys maneuver, the space bar attacks, and the M key fires the secondary weapon. Despite having a full QWERTY keyboard at their disposal, the designers committed that cardinal sin of platformers — press-up-to-jump. The item screen and pause buttons are inexplicably banished to F1 and F2.  (As an aside, hit F2 to pause and Popolon hops onto a toilet.)

Galious’s collectible items will be the biggest disappointment for modern gamers. We’re used to games like Zelda, in which most of the items are exploration tools which the player uses to access new areas of the game. Not so in Maze of Galious. Here, the entire hub world is accessible from the beginning. Out of 39 unique items, at least 23 of them are optional. 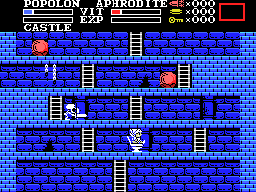 Many items simply negate a minor disadvantage of one of the two player characters (e.g., the Ring which allows Aphrodite to destroy rocks in three hits instead of 15) or nullify particularly obnoxious enemies. The Crown is an example of the latter: it renders harmless the ghost enemies of World 2. Other items remove curses from certain dungeons. These curses make the dungeons harder, but not impossible, to complete, which opens up some interesting speed-run possibilities. Without the Robe, for instance, the player’s controls are reversed throughout World 8.

All items, including the mandatory ones, are arbitrarily scattered throughout the hub world. The game rarely bothers to tell players what stupid trinket is needed to progress, or where to look for it.

The five sub-weapons are a bit more interesting. In addition to the standard arrows, there are Ceramic Arrows which can penetrate several enemies in a row, the Crawling Fire which travels around the player’s current platform, the Other Fire which runs along the floors and drips down from ledges, and the powerful but self-destructive Mines. Each of these sub-weapons comes in handy for at least one Great Demon fight, and ammunition is plentiful enough to justify using them liberally. 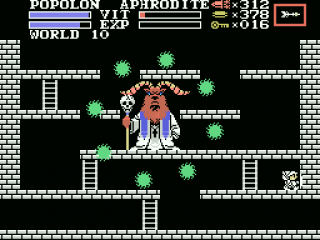 Though the game is well- remembered by MSX fans, it has a cruel streak that’s uncharacteristic of Konami’s tough-but-fair ethos, and it’s present from the very start. Throughout the castle, black bats dangle from the ceiling, nearly invisible thanks to their transparent pixels. You will plow into them constantly. There are unnecessary maps for each of the tiny dungeons, yet no map of the sprawling hub world. There is ridiculous, Castlevania-esque knockback, and multiple situations wherein a single mistake will send the player tumbling helplessly through several screens into a pool of lava.

In a sadistic challenge, the Cross — necessary to defeat the final boss — is hidden behind an unmarked breakable wall, beyond an invisible pit, and above a pool of lava. The player must reach this item by jumping from the platform above it at exactly the right point, such that Popolon can reverse direction in mid-air and just barely make it onto the lower plane. If this were Super Mario Bros., it would be more doable. But it’s not. It’s Maze of Galious, and you’re doing this with arrow keys and a space bar. 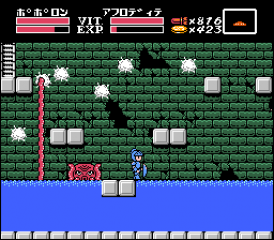 The Famicom port, Majou Densetsu II: Dai Mashikyou Galious (“Demon Legend II: Demon Bishop Galious”), was released just four months later and is exponentially more playable. More a “remix” than a true port, Dai Mashikyou fixes some of the flaws of its MSX predecessor. The Famicom hardware allowed for scrolling and larger, more detailed sprites. There’s a dedicated jump button, and the controls are a bit tighter. Although it has half the number of dungeons as the MSX game, they are significantly bigger and more maze-like.

Most importantly, Dai Mashikyou has more Metroid-style exploration items which allow the player to access new portions of the hub world: the Mines can now be used to blow up certain floor tiles; and a new item — the Balloon Bomb — destroys ceiling tiles. Rather than being able to break rocks from the beginning, the player gains that ability from the Mongolian Sword. As any “metroidvania” fan will tell you, nothing feels better than using a new item to access an area that was previously just out of reach.

Other aspects remain the same. Each dungeon has the same suite of four optional helper items. Without a keyboard, the incantation mechanic is translated into button-sequence codes (e.g., A, A, A, B, B, B). Unfortunately, there are still a fair number of mostly-useless items, and super powerful items like the bat-erasing Dagger and time-stopping Bible are omitted. Popolon and Aphrodite have the same strengths and weaknesses as they did on the MSX; but in a cute twist, Popolon and Aphrodite now get discounts from shopkeepers of the opposite sex. 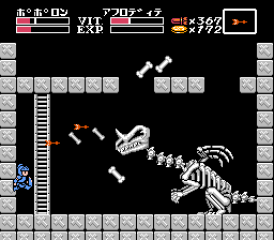 Neither Galious can be counted among Konami’s best work of this era. They’re not even among Konami’s best of 1987 — the year we got Metal Gear and Life Force. And compared to Falcom’s Legacy of the Wizard, also released that year, they’re downright dull. But there are just enough good ideas here to make you wish Konami took another crack at this incarnation of the Knightmare series.

There’s also a fan remake of Maze of Galious for computers. It’s based on the MSX game, with some updated SVGA visuals and four graphic sets. 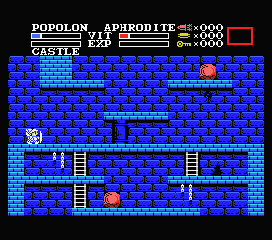 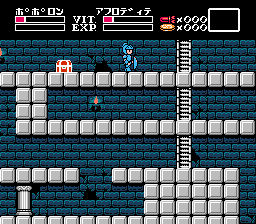 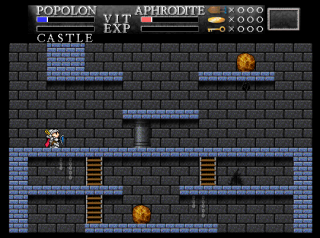