Superficially workmanlike, Dark Half is actually one of the more unusual and challenging RPGs available on the Super Famicom. It’s also a major departure for developer Westone, being one of only few RPGs by them and definitely the most macabre title to bear their name. 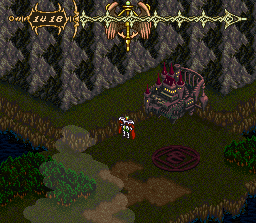 The game begins typically for a mid-nineties RPG. You play a lone paladin named Falco on his way to stop the return of an evil force sealed away long ago. Despite invoking and taking on the persona of his heroic god Roda, he fails and the demon king is released. Standard set up for this kind of game, however, after a brief scene where the demon king’s earthly host (named Rukyu here) assembles his servants and prepares to find and kill Falco/Roda for good, things go in a different direction.

You actually get to play as Rukyu himself, and your first order of business is to massacre the population of a small village and consume their souls to bolster your own strength. Only after this dark work is completed does the game return to Falco/Roda’s perspective who, being informed of Rukyu’s revival, sets out with some friends to stop him. 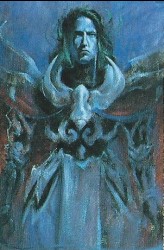 The player gets to alternate between controlling Roda and Rukyu every chapter. What makes the game interesting is the way Westone works the game mechanics to complement each character’s abilities and attitude. Their lives are intertwined due to how their encounter in the game’s opening played out, and this is reflected by each character having to manage their “soul power.” It drains with every step you take, and if you run out, the game ends with both characters dying unceremoniously followed by the credits. Both characters can regain soul power by killing monsters. Roda can also gain power by exchanging certain items at churches, while Rukyu can gain power by murdering townspeople. 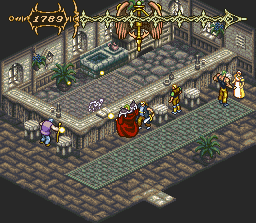 Where things get interesting is how this plays into the game’s world design and encounters. Roda’s side of the story is very similar to a traditional RPG of the time. He makes some friends who join his party, you order characters to attack or use magic on the battlefield, and then return to the nearest town to replenish equipment and buy better weapons.

Rukyu, however, does not use items or equipment (nor does he even have magic points like other characters). Instead, all he can do his spend soul power itself to cast very powerful magic at his enemies. To make up for this, however, he can assemble a party of monsters to fight for him by enchanting them in battle and also will periodically receive a companion from one of his servants. The latter makes for some great visual variety, as Rukyu’s initial companions are a berserk Cerberus and a jackal man adorned in gold plate armor that spits tornadoes at people. 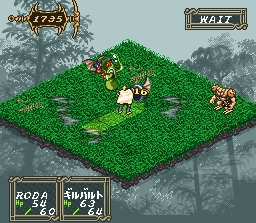 When a monster joins the party, Rukyu also learns one of their spells. This quickly gives him a massive diversity of abilities to draw upon and makes him significantly easier to play as than Roda. It also makes up for not being able to directly control his party’s actions. This makes for a different dynamic in combat, since every action Rukyu takes lowers his soul power, it’s usually wise to have a formation where he hangs back and exploits specific enemy’s weaknesses while his demonic servants rush in and perform the grunt work.

In addition to this, unlike many other RPGs of the time you actually have a very high chance of successfully running away from battle. This is useful since you only gain so much soul power from defeating enemies. You have to weigh every step you take in the game as to whether or not it will be worth the spent energy. This plays in the world design as well, as the game’s many puzzles and traps involve you hitting a dead end or having to backtrack a long ways if you fail. At the same time the game’s world is filled with hidden items and even extra party members can be found by poking around a bit. It’s an impressive way to create tension and a sense of urgency in a slow paced RPG with turn based combat. 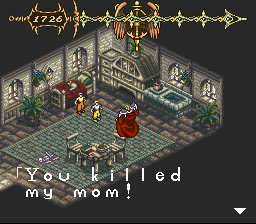 Another incentive to explore is that there are several points where Roda will travel through areas Rukyu has already conquered and vice versa. In these cases things discovered by one character will already be revealed to the other. This is useful for Roda because Rukyu will not open treasure chests as he does not use items, and useful for Rukyu because he can find unique party members in hidden areas uncovered by Roda.

As a final nod to its tone, and a final differentiation from more typical RPGs, your ability to save is extremely limited. There is generally just one point per chapter where you can save your game, and after you do so, the NPC that does the act vanishes for good. 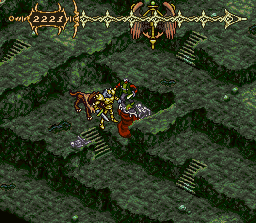 Dark Half was released late in the SNES’ life, in the spring of 1996, but everything is presented in a 3/4 isometric view. Because of this the character sprites are actually not very impressive. There’s a lot of variety, but they’re small and just barely animated (even the main characters don’t walk so much as slide, the sprite work was clearly rushed).

The backgrounds, however, are a different story. These are very detailed and have a lot of smooth extra animations like a family pet fidgeting on a bed or grass blowing in the wind. Almost every area has something going on in addition to the time of day changing from chapter to chapter which also keeps things visually appealing when you retread familiar territory. A baroque, imitation oil painting style was used for the character portraits shown between chapters and these are very impressive. So while there is some inconsistency with the sprite work the game looks great overall. 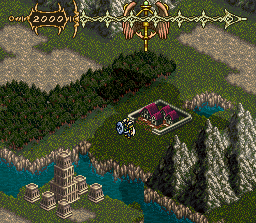 The small sprites are understandable though, as the same sprites are used while in combat. This lets them have a relatively large number of characters and effects going on quickly which keeps the combat from getting boring. Compared to, say, the original Persona for the PlayStation, which also features large groups, formations and a grid Dark Half‘s battle are extremely quick. It has characters fighting on a grid but streamlines the process by letting you move freely to any enemy if you decided you want to fight up close instead of relying on magic. The game also lets you arrange a formation ahead of time that you will start every battle with. This ,combined with having to worry about your soul power or limited spells (for Roda), makes for a system that rewards efficiency and aggressive exploitation of enemy weaknesses.

Two other features of the combat are that when casting magic, instead of having different versions of say, a fireball, you just have one fireball spell and then can choose how wide an area it will hit. There’s a ratio of doing more damage the more focused the attack is or using less soul power depending on the spell, so judging if it’s worth hitting two or three enemies (or even catching one of your own) simultaneously keeps things interesting. Another quirk of the combat, borrowed from older Final Fantasy games, is that “cure” type spells kill undead creatures instantly. This is consistent to the point where if Rukyu uses such a spell on himself he instantly dies! 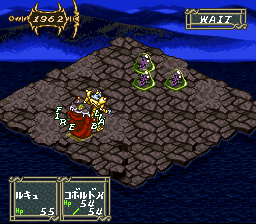 The game’s soundtrack is consistently excellent. It’s a fairly somber one with lots of organ and low strings that go perfectly with the visuals. The quality here cannot be understated. The soundtrack is credited to T’s Music, a music contractor with an excellent reputation.

The composers, Takeshi Sato and Takashi Tsumaki, only previously work was on an SNES game based on An American Tale: Fieval Goes West. Takeshi Sato would go on to manage sound design for a few more games and both composers’ careers continued outside of the video game industry. It is unfortunate they didn’t do more composition work for video games, as Dark Half‘s score is both technically impressive and adds greatly to the game’s generally dark tone. 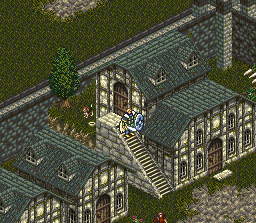 Dark Half‘s writing is also very engrossing. There is a large amount of unique NPC dialogue compared to most RPGs. Most impressively, there’s a very short, but unique conversation for every single NPC that Rukyu can kill. The dialogueis very flowery and biblical, which is appropriate given the game’s premise and helps to create an atmosphere that no amount of poorly animated sprites or cartoonish sound effects can overcome.

Again, though, sadly, this is the only game Naoki Yasuda has ever written for. Though Naoki is credited with a “Special Thanks” at the end of both Soul Blazer and E.V.O on the SNES, and given those games’ starkly spiritual (though much more lighthearted) content that one can’t help but wonder if he was involved more directly with their production well. 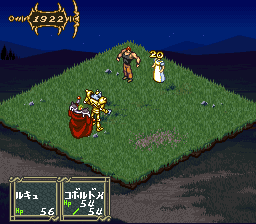 Part of why the writing works is because we aren’t given a lot of details about Rukyu or Roda beyond the most basic information, but at the same time we’re given about the same level of information and emotion from almost every character in the game. So while Rukyu stands out due to how sadistically he behaves compared to most RPG protagonists, we’re given just enough information about everyone to buy into the setting.

A stand out example is how there are NPCs wandering around most of the game’s dungeons for various reasons, something you almost never see in other RPGs, and while playing as Roda, he almost always has a family member or hired party member with him that has something to say. On Rukyu’s side, his demonic servants, a scythe-wielding evil vizier type named Velgil and a ruthless witch named Arva, will periodically appear to talk to him about current events in the story. So while a lesser game would have a noticeable lack of character development from the protagonists not saying much, Dark Half gives us a good, steady stream of dialogue that gives us intriguing information about the game’s world without getting in the way too much of exploring and battling monsters. With even NPCs that exist only for Rukyu to devour seconds after they appear having unique dialogue it’s obvious this aspect of the game was taken very seriously by Westone. 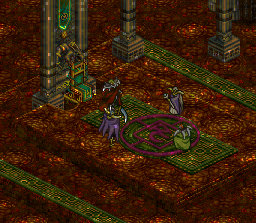 Predictably, the two characters must fight each other at the very end of the game. Surprisingly, while the game builds up Roda as the hero, you actually get to choose whether you will play as Rukyu or Roda for the final battle. Each requires a different strategy to beat the other, with an appropriate ending for each.

While Dark Half flew under the radar of most gamers even in Japan, it’s a great effort from Westone that shows how versatile they could be, despite their mainstay being many entries of the cartoony Wonder Boy series.

Some of the puzzles in it are a bit tedious and some of the sprites are cheaply animated but it’s greater than the sum of its parts thanks to its unique atmosphere. Despite likely not having a huge budget and very little marketing (not even a manga tie-in) one can tell that Westone gave this title everything they had.

Dark Half was never released in the US (understandable for the time, you spend half the game walking around as the devil murdering innocent adults and children alike), but it has unfortunately not been re-released on any other system since. Attempts by fans to fully translate the game into English are dead as of this article as well, but due to the strong presentation and generally linear design it’s still v playable. Anyone interested in RPGs should check it out for its focused presentation and unique system which no other RPG  matches.