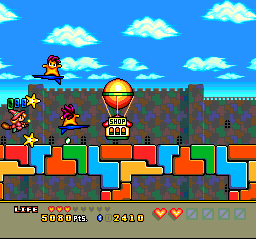 When it comes to quality shooters, the PC Engine is an embarrassment of riches. However, many of them feature similar sci-fi, outer space theme, so some of them do tend to blend together. There are a numbers of outliers, like the aquatic Deep Blue, the Air Zonk games, Coryoon, Star Parodier, and Konami’s Parodius and TwinBee. Out of all of these, the most well-known is probably Quest’s Magical Chase, a cute-em-up featuring a flying witch. Its notoriety stems almost entirely from its exorbitant aftermarket price, but it’s a pretty solid game in its own right too.

The heroine is Ripple, an apprentice witch, who is tasked with tracking down six demons she accidentally released. She’s accompanied by two “star maidens”, which act as options and have their own firepower. You can control their positioning and firing direction using the I button. Because they absorb certain low-level bullets, they can also be used as a method of defense. Ripple technically only has a single life, but she also has an expansive life bar, as well as backup hearts, which are activated by double-tapping the fire button and refill your health. Dying will send you back to the beginning of the stage, regardless of whether you have any backup hearts left.

Ripple can equip herself with nine different weapons, including the rapid fire “Balkan” (a cutesy rendition of “Vulcan”), 3-Way, wave beams, homing attacks, and the super powerful x4. The stars can only be equipped with two other types of weapons ・the Cracker Ball and Cyclone. Destroyed enemies will drop crystals, which can be used at the shops, which are staffed by the same pumpkin head guy. These typically appear once or twice throughout each stage. You can also purchase health restoratives, or other items to extend the length of your health meter.

The stages tend to be long planes, without much design. The exceptions are stage 3, which has an airship which closes in and out on you, and stage 4, which has a more elaborate layout, with scenery you need to fly between. All stages include at least one mid-boss (the final stage has several), which are featured before the level begins.

Between the large life meter, constant health refills (both purchased and dropped by enemies) and backup hearts, Magical Chase becomes a pretty easy game. There are three difficulty levels, and while you can only play half the game on the easiest setting, the game isn’t particularly difficult, unless you restrict yourself from using health restoratives. Some of the bosses later on have some incredibly tricky shot patterns, and having all of this backup health lets you absorb most of the damage.

However, ultimately it doesn’t matter, because Magical Chase is not really meant for the hardcore shoot-em-up fan, but is rather one of those games where you just enjoy the sights and the sounds. Ripple is a cute heroine, and all of the enemies are incredibly silly to varying degrees, ranging from chicken heads that have human legs for bodies to weird, grinning raccoons, to snowmen wearing Jason-esque hockey mask. A recurring theme is that some of the bosses wear rather frightening armor, but when you destroy them, it’s revealed that they’re just some little shrimp. Indeed, many of the enemy death animations are pretty amusing. The backgrounds are colorful (if a little repetitive) and the parallax scrolling is impressive for the Turbografx-16.

The music is composed by Hitoshi Sakimoto and Masaharu Iwata, who later worked together on many other Quest titles, including Ogre Battle and Tactics Ogre. It’s much more lighthearted than their dramatic orchestral work, but all of it is incredibly catchy. In 2013, more than twenty years after the actual game was released, the label SuperSweep published a soundtrack CD. It includes all of the original music, including a handful of arranged and prototype tracks ・these include a few redone in the later Sakimoto/Iwata signature style, recalling something like Final Fantasy XII, while another sounds like it was composed using Sakimoto’s FM Terpsichorean sound driver.

There are two releases in Japan, with the second one known as the “Fan Edition”, since it was associated with PC Engine Fan Magazine. Other than a different sticker on the packaging, there’s no difference between these releases, and no real difference in aftermarket price either. The American release, published in 1993, is insanely expensive, especially CIB.

The American release has a handful of graphical changes. In the Japanese release, the first stage is built with colorful Lego-like blocks, but this has been changed to a more generic medieval castle scenery. Some of the sprites have been redrawn – Ripple looks a little less rounded, and the face enemies in the first stage are now fairies. The shopkeeper balloon now looks like a floating pumpkin, which is more appropriately themed. 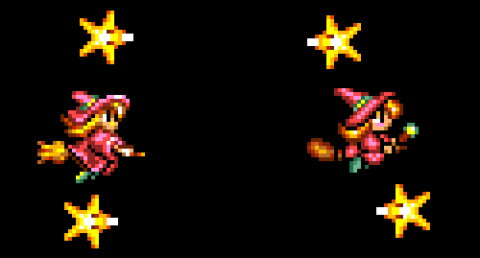 A decade after its original PC Engine release, Magical Chase was ported to the Game Boy Color courtesy of Micro Cabin, who gave it the subtitle Minarai Mahoutsukai Kenja no Tani e, which means “The Apprentice Witch Travels to Philosopher’s Valley”. The highest difficulty level is gone, and instead adds hint screens. The shopkeeper has also been changed to a cute girl. The graphics and music are degraded obviously, and the screen proportions are different, but in spite of this, it’s fantastic port, and even maintains the parallax scrolling. There’s also a PC release by Bothtec, which is a straight port that uses audio recordings from the PC Engine game as redbook.

Due to its exorbitant aftermarket value, Magical Chase is one of those games whose quality is hard to assess. It’s an excellent game, but worth the several hundred dollar asking price? Probably not. However, while it’s not the best shooter on the Turbografx-16, it is one of the better ones, even if it is a little on the easy side.

After Magical Chase, Quest shifted gears from light hearted cute-em-up to serious strategy with their Ogre Battle series, but a few of the items, like the Ripple staff, are named after the witch. The pumpkin race is debatably a reference to the pumpkin shopkeeper too.

The game has had a noticeable effect on shoot-em-up fans. The shoot-em-up construction kit Dezaemon+ on the PlayStation includes a pre-made demo shooter called Little Chaser. And the main character looks almost exactly like Ripple. The 2007 doujin shooter Trouble Witches features a similar theme. You still collect currency, and the shopkeepers reside in floating pumpkins, even wearing pumpkin attire. The character Sakura in the Cave shooter Deathsmiles, herself a witch, also plays much like Ripple, with two crows that act as her Options. 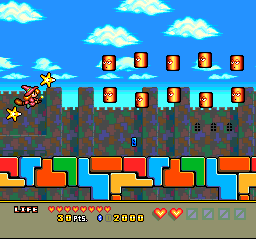 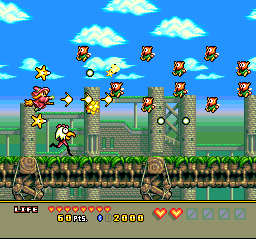 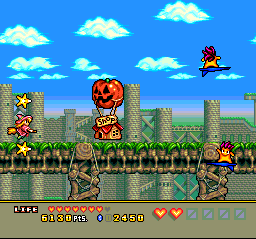 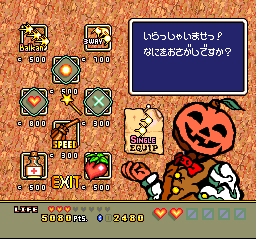