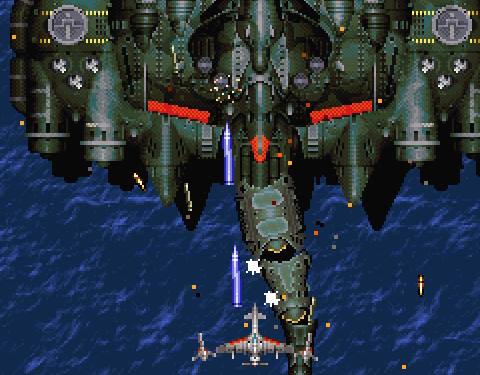 Battle Garegga is a game with a divisive reputation. A number of shoot-em-up fans regard it as one of the best shooters of all time; others feel that the cluttered visual style and rank system ruin some pretty cool ideas. Nevertheless, it became one of the most well-known games in Raizing’s output. The game was directed by Kazuyuki Nakashima, one of the ex-Compile staff members who left to help form Raizing and programmed Shinobu Yagawa, who previously worked on the manic Famicom shooter Recca and  later directed many other subsequent shooters for Raizing and Cave, using the style of Battle Garegga as its base. The general style, in addition to the bomb collection system, was heavily influenced by Taito’s 1990 shooter Gun Frontier, to the point where Battle Garegga could be considered a spiritual successor.

The storyline takes place in a sort of diesel punk versions of the 1940s. Motors are all over everything, and factories continuously churn out machines, with tall smokestacks littering the scenery. The two main characters, Brian and Jason Wayne, own a very productive automobile factory. A mysterious group called the Federation offers them wealth beyond their wildest dreams if they switch manufacturing from cars to weapons, and they agree. While the Wayne brothers are counting their riches, The Federation begins a world conquest by destroying everything that opposes them. The Wayne brothers quickly figure out that they had made an extremely poor decision and use four experimental aircraft to fight against The Federation and destroy the machines they made for them.

Unfortunately, the Wayne brothers may have made the Federation’s machines a bit too powerful. Anyone that remembers or has played Compile’s Zanac will be instantly familiar with what’s referring to as a “rank” system. The computer will count how many times you fire your weapon, how many times you grab power-ups, how long you go without dying, how many bombs you hoard, even your score count – and then adjusts the difficulty accordingly on the fly. Once the rank goes up, the difficulty increases dramatically. There is one way to make the rank go down – by dying. It creates some ridiculous scenarios where players will intentionally suicide at points to make the difficulty manageable, and can only properly clear it by scoring high enough to rack up extra lives. Then again, the non-Japanese arcade board removes the extend feature, screwing this all up rather royally. Managing rank is especially a pain because, technically, it’s invisible – you might not even know there was such a system in place without being informed of it beforehand, unless you really played a lot. 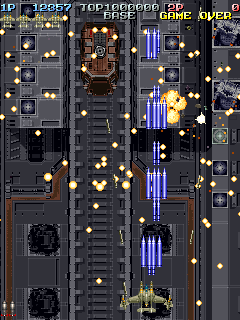 Visually, Battle Garegga is incredibly outstanding, with a depth in pixel artwork comparable to Irem/Nazca games like Metal Slug or In the Hunt. It’s got some spectacular looking explosions, as each enemy goes down in different blazes of glory – some are simple, small balls of fire, others are huge, twisting fireworks. Bits of shraprnel and debris fly off of every hit. The atmosphere might be dark and depressing, but the attention to detail is quite impressive, especially on the gigantic fighter plane bosses. The most impressive of these is a gigantic green battleship which resembles a manta ray, complete with a swaying tale. Not the most practical of designs, but it sure looks awesome.

Even though it’s a visual treat, the art style does intrude a bit on the action. The pacing and amount of bullets have shot up, and while it’s not quite a bullet hell shooter, it’s considerably more hectic than Raizing’s other earlier games. In shooters of this type, the bullets are brightly colored and easy to see, so they stand out from the scenery. Not so in Battle Garegga, where the bullets look like actual bullets. These projectiles are long, dark silver or gray colored, and tend to blend in with the dark machinery in both the foreground and background. Many fans quite were quite vocal in their criticism, and so Raizing eventually made a second version that replaces many of the realistic looking bullets with bright yellow fireballs. 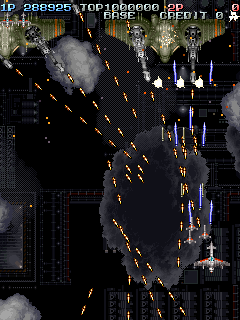 Besides the art style and rank system, Battle Garegga has some other interesting features. Once you get options, you can command them in a variety of formations, positioning them to fire behind you or command them to spin, again borrowing some aspects from Compile games like MUSHA. Each ship also has its own unique bomb attack (called “bombers” in Japanese shoot-em-up parlance.) None of them are your standard “one big explosion” either, as they’re more like super attacks. The Silver Sword spreads napalm in the opposite direction you move in. It is very powerful, but can be hard to aim. The Grasshopper turns invincible and fires a torrent of bullets at an incredible rate. The Flying Baron launches homing rockets in all directions. The Wild Snail turns invincible and uses a pair of flame-throwers on its wings. You get bombers by collecting small, grey bombs, dropped by destroyed enemies. It takes forty of these small bombs to make one large bomb. You can prematurely fire off bombs for a lesser effect if you really need to use them, but saving up for a large bomb may prove more advantageous.

There is also an “arrange mode”, activated through dip switches. This mode lets you choose the order you play most of the levels – you still have to do the valley level first and the airport level last, but it can be fun to mix up the order every once in a while. Taking on some of the later bosses while your rank is still low can make them seem like completely different fights.

The scoring system is fairly simple. Sometimes enemies will drop medals when defeated. The medals start off small, but as you collect them, they get bigger and are worth more points. If you miss a medal by letting it fall off screen, they revert back to being small again and thus resetting their point value. Picking up medals can increase your rank, so scoring can be pretty dangerous if you do not know what you are doing.

As a neat bonus, by entering a code, you can unlock four of the characters from Mahou Daisakusen. Unlike in their debut game, all four of them are extremely powerful this time. This appearance foreshadows one of the biggest crossovers in shooter history with Raizing’s followup game. 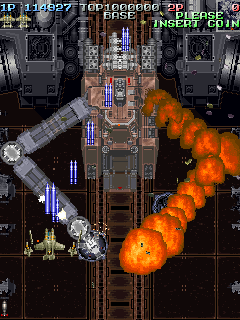 The Saturn version of Battle Garegga is another excellent port, and includes the ability to tate the screen or emulate slowdown for an experience closer to the arcade. The arrange mode, alternate bullets, and hidden characters can be enabled via the options. It also includes some unlockable replay videos.

It also features an arranged soundtrack, which remixes some of the music from the arcade version and lets you switch between the two. One of the best pieces is the song “Stomp and Stab”, one of the pulse pumping boss themes. The music was composed by a young Manabu Namiki, who would later go on to give himself a reputation for excellent shooter and retro-style music, working on several Cave games like DoDonPachi Daioujou, Ketsui, and Mushihime-sama. The style is Detroit techno, not often heard in video games, and it goes great with the non-stop action. The ending credits theme is a homage to the band Underground Resistance.

Battle Garegga was also ported to the PlayStation 4 by M2 in 2016 as part of their Shot Triggers series. This is the ultimate version of the game, including the ability to modify several different factors of the game. It includes all of the options present in the Saturn version, plus new added arrange modes, a “novice” mode, another new arranged soundtrack by Manabu Namiki, and an on-screen rank graph to indicate the difficulty. It’s a brilliant way to study how the game actually works and how to play effectively. 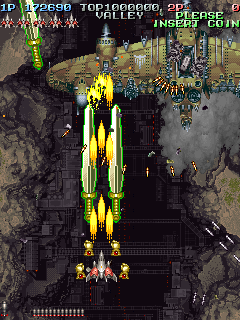 While some design decisions may rub players the wrong way, and it is insanely difficult, Battle Garegga is still an absolute classic. The Saturn release is quite pricey, and often reaches the triple digits, though not quite as expensive as Radiant Silvergun or Hyper Duel. A limited edition bundle was released for the PlayStation 4, including an artbook and a soundtrack CD, but only included a download code for the game, not a physical Blu-Ray. A physical version of the PlayStation 4 game was released in Korea.