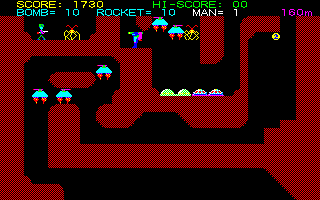 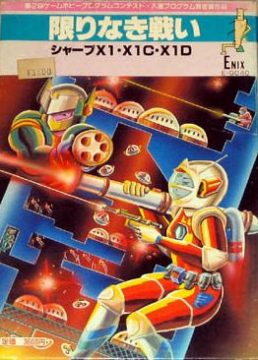 Archaic Japanese home computers offer the potential for some amazing “hidden treasure” discoveries. Consoles games, even Japanese exclusives, tend to be well documented with plenty of lists, screens and generally obvious places to acquire them – especially when it comes to downloading ROMs. Japanese computers though, due to the inherent nature of their language barrier, are tougher to find information on. It’s one thing to import a mainstream and popular “plug-n-play” console like a Famicom, but it’s quite another to import something like the Sharp X1 computer which, according to some lazy Google searching, was annihilated by Hudson’s PC88. Then there’s the fact that the emulators are in their native language and the Japanese have shady ways of distributing dumped software. It’s not easy to acquire old Japanese computer games and it’s not easy to run them. So finding an unknown gem, which might only be circulating among isolated cliques, is quite a challenge. But when you do find one, it’s all the more sweet.

Enix’s Kagirinaki Tatakai (限りなき戦い, or KT), released in 1983, came to people’s attentions as a result of Treasure’s Bangai-O. In 2003 there was an interview with Treasure’s Yaiman regarding Astroboy where he spoke about Bangai-O. Then, in 2008, someone translated a piece of the interview and posted it online, which I’m copying verbatim: “Bangaio started off as a remake of an X1 game called “*****” [Name purposefully edited out], but then I started to mix in anime influences from Edeon, Macross and Layzner, and pretty soon it was didn’t resemble the original, and so its being a remake became 120% a bluff/lie.”

Of course people wanted to know what this mysterious influence was. Bangai-O is an insanely good N64/Dreamcast shooter/platform hybrid, and this kind of epic news is like discovering that the much loved Bomberman was actually released in 1983 on the ZX Spectrum. You want to play this mysterious title and see it for yourself. “What could it be,” they all cried!

Trawling the X1’s meagre action game listings, Kagirinaki Tatakai was the first title that seemed similar enough and so was plastered all over forums. Then it was discovered that people had jumped to conclusions and the real influence was actually Hover Attack (released on both the X1 and PC88). Attention then turned to Hover Attack and Kagirinaki Tatakai was mostly ignored. But Hover Attack is actually a bit crap. It’s slow, difficult, repetitive, and once you get over the awe of how its missile patterns kinda resemble Bangai-O, it’s not much fun. Kagirinaki Tatakai on the other hand, could be one of the greatest games released in 1983, and it’s also probably the best not to leave Japan.

To make it easy to picture: Kagirinaki Tatakai is like Activision’s H.E.R.O. meets Mr. Driller. You control a man with an unlimited-fuel jetpack, infinite lazer, and a limited supply of rockets and grenades. Your goal is to descend through the vertical world, killing enemies, destroying the landscape with your grenades, and trying to reach the greatest depth possible.

It doesn’t sound too exciting, yet, but you need to look at the year it was released. In 1983 its top-rated peers were titles like M.U.L.E. (admittedly one of the undisputed best games ever designed) and Atic Atac, with an ocean of utter garbage falling somewhere underneath (remember, there was a crash around this time). Kagirinaki Tatakai had a lot going for it, and did many things which put it ahead of the curve.

First thing you should notice is, the main sprite isn’t mirrored. It has separate frames drawn for whether you face left or right – which for me is the acid test of how much effort went into a game, since this requires double the effort and double the memory (and considering this is running off a magnetic audio tape, there’s not much to spare). The original Phantasy Star did it, Super Metroiddid it, and then 99.9% of all other games did not do it until 3D modelling came along.

You’ve also got three separate weapons which have very different traits. Looking even at arcade games from this year (which would have been more advanced than home computers), you find a lot of action games which limit you to one weapon, and maybe a secondary power attack. Three very different weapons is quite impressive. You can also rapidly fire the lazer (hold down space), which when you consider that home systems suffered from a limited number of sprites on-screen, is another high point.

Then there’s the physics engine. Shooting a rocket will actually send you flying back slightly, which forces you to think, since although the most powerful weapon, you risk a knockback which could send you down a hole or into enemy fire. Very cool. Falling too far will also kill you, which although isn’t new (Donkey Kong did it), is handled in an interesting way. Fall enough and your inertia will kill an enemy below, but fall too much and you die. It also changes the way you approach the flying aspect.

Adding to the realism is the fact that you can destroy the environment in real-time. Any part of it. All of it. No, seriously. See that floor? If you don’t feel like navigating a maze of enemies, just bomb your way through the floor and avoid them. This adds a HUGE tactical layer to the game, since you can bomb holes in the floor and let enemies pop through one at a time to take them out, or avoid them altogether. But since your grenades are finite, and essential to passing later sections, you need to use them carefully.

The enemies have also had a lot of thought put into them. I’ve grown sick of the number of times I’ve seen palette-swaps to create new enemies. It’s lazy, and it’s annoying. In Kagirinaki Tatakai there are a lot of unique enemies, and while they do repeat, it takes a long time before you again see the “pinkman gunners” from the game’s start. There are also some awesome one-off moments, like the wave of rockets which fly up from the ground.

Along the way you encounter the aforementioned gunners, nicely animated flying saucers, jets with a single homing rocket each, aliens with rifles, heavy spaceships, artillery bases and more. Each has its own movement pattern and style of attack – the jets’ homing rockets are terrifying things.

Dueling with these enemies you discover a few other neat things Kagirinaki Tatakai does. Bullets cancel each other out. You can shoot out most enemy fire – though be careful, since on the same horizontal level, the alien riflemen fire slightly lower than you, making it tricky to cancel out their shots. This kind of attention to detail is rare. Then there’s the cool way you can ride on an enemy’s head, and you can even one of the little blue missiles fired by the heavy spaceships.

Blend this in with the destructible environments and maze-like level design, and you’ve got a fiendishly hectic little shoot-em-up. One that’s a helluva lot better than Hover Attack. It does so much “right”. Your character automatically walks over small gaps, instead of falling straight through, if you hold down that direction. So even though the controls can be a bit floaty, there’s no frustration at accidentally falling through holes.

Kagirinaki Tatakai has the kind of fresh-faced attitude you only really see in very early video games, and even then not too often – it has a kind of internal realism and is full of clever ideas which go beyond what you think the hardware capable of. So many later games, with better visuals and audio, were so utterly devoid of substance and cleverness, that it’s sad to know this never reached a wider audience and took 25 years to be discovered by the west.

Of course there’s some things which stop Kagirinaki Tatakai from being perfect – but these are minor. The music isn’t very good, it sounds like the last few chords of Spyhunter played really badly, so mute the emulator. Plus, the controls aren’t that sharp, though this is likely inherent in the original hardware (TIP: do NOT use Joy To Key, since it introduces further lag). Then there’s the fact that enemies can’t fall through the bottom of the screen: even if there’s no ground beneath them they’ll walk along the bottom of the screen as if there was ground there. You also can’t fly up beyond the top of the screen, the game’s overall smoothness could do with an improvement and the respawn points can sometimes be in inconvenient locations. But in the context of when this was made, and it being supplied on audio tape, plus the fact it was by a Japanese high-school student, too much criticism would be unfair. Play the game and enjoy the journey, and don’t use save states, since you’ll have the most fun trying to beat your old depth-scores – mine’s about 300m, au natural. The ending is 600m deep!

Tthere is no other home computer game released exclusively in Japan in 1983 which is more fun than Kagirinaki Tatakai – at least on tape, anyway.