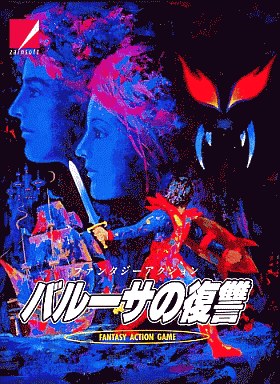 Zainsoft isn’t exactly a company that’s recognized very much. While they published a number of action and RPGs in the late ’80s (also under the name Seinsoft and Xeinsoft), they were all for Japanese computers. And unlike Falcom, one of its major competitors, none of its titles were ever ported to systems popular in English speaking territories, leaving their contributions as less than footnotes. Baruusa No Fukushuu, or “The Vengeance of Barusa”, was Zainsoft’s very last game, released for the X68000, before going out of business. It’s also, coincidentally, probably their best title. It’s a side scrolling action game, much like Capcom’s Ghosts ‘N Goblins, but infinitely less frustrating and with more precise controls. 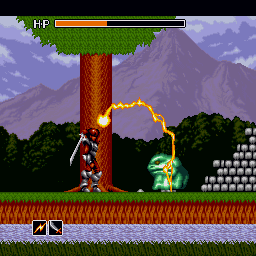 The story focuses on Suteiru, a boy who finds a girl named Roengurin washed up on a beach, who turns out to be the Princess of Ederu. An ancient demon named Baruusa has ravaged her land and killed almost all of the royal family, with Princess Roengurin is the only survivor. Suteiru surprisingly knows who Baruusa is, as his grandfather was a great warrior and killed Baruusa many years ago. He promises to slay the demon just as his grandfather did, and hopefully keep Baruusa from resurrecting himself this time. The story itself is pretty generic, but it gets fleshed out with periodic cutscenes. One particularly funny cinema has a man’s pet monkey messing with his face while Suteiru asks him for directions. 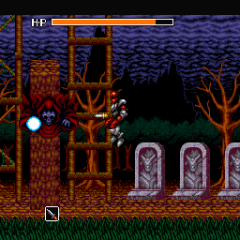 Suteiru’s journey takes him through eight levels, all filled with enemies and traps. Enemy designs vary from detailed, like the zombies in level one or the rotating skulls in the last level, to very shoddy and almost incomplete, like the giant frogs in level two. Suteiru’s sprite is not that good either, as despite being well animated, it’s not colored at all that well, and looks suspiciously like Adol from the Ys games. The backgrounds are equally inconsistent, as sometimes they look amazing, like the fire castle. Other times they look rushed, like the forest. 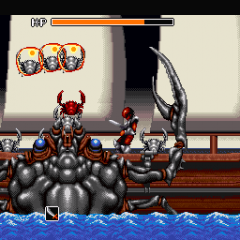 Fortunately, the bosses are always impressive looking. The very first boss, a giant crab that erupts from the ocean and spews more giant crabs by blowing bubbles, is by far the coolest boss and one of the best parts of the game. Another impressive boss is the giant stone head that spits boulders and fires a laser beam. Baruusa himself is no slouch either, though, having multiple forms and some very strange attacks, like shooting a giant centipede out of his nose. 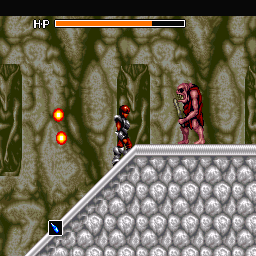 The action is very fast paced. You start the game armed with a sword, which can inflict a decent amount of damage but has short range. Fortunately, as the game goes, you can collect more weapons and power-ups. Weapons vary from swords, to throwing knife, to shurikens. While the sword does the most damage, knives and shurikens have better range and can be aimed diagonally upward, making annoying flying enemies much easier to deal with. Some weapons temporarily replace your old one or can be used at the same time, like lightning, which puts an arc of lightning over your head and in front of you until it wears off. One of the more bizarre weapons puts a small blue lady in a dress above your head that can absorb hits from above or be fired like a projectile. Like lightning, it runs out of time eventually. 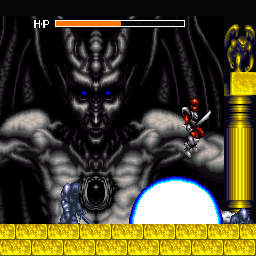 There are also traps and a few puzzles around. Fortunately, platforming is pretty limited. Like Ghosts ‘N Goblins, jumping is more difficult than it should be, as Suteiru does not jump very high and falls very quickly. You can change direction mid jump, at least, but it doesn’t have much of an effect on your trajectory. Luckily, there are no bottomless pits or anything else that instantly kills you, so the frustration is much lower. Possibly to make up for this, you only get one life, although your health bar looks a lot longer than it actually is. Luckily, you get infinite continues. Using a continue sends you back to the start of a level, though, so it can still be very difficult. 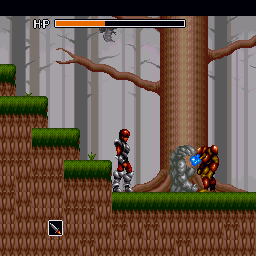 Despite being a fairly decent if unremarkable action game, Baruusa No Fukushuu has a strangely incomplete feel to it. Upon beating the game, you get no credits, or even a message saying “The End”, for that matter. All you get is a short ending cutscene and then you get booted back to the main menu. Also, some levels are missing bosses, but have a huge empty space where one would probably go, which is particularly noticeable in the cave. One gets the feeling that Zainsoft had much bigger plans for this title, but they were not completed, possibly having to do with the company going under later that year. Despite its inconsistency, it looks pretty decent in the better moments, and has a quality FM soundtrack, making it a worthwhile game to check out. 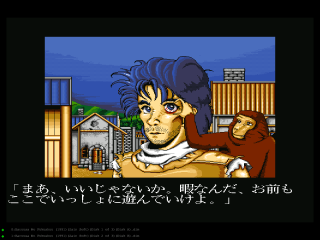 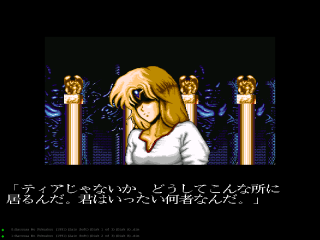 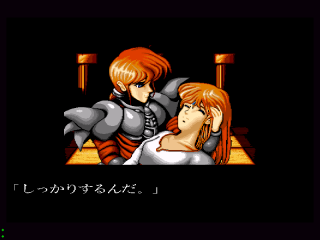 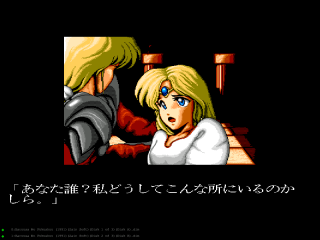 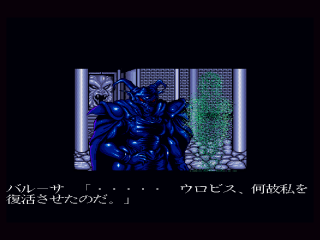 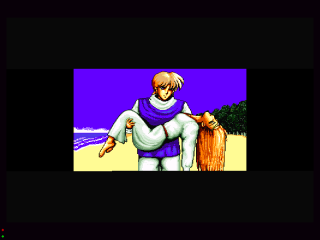 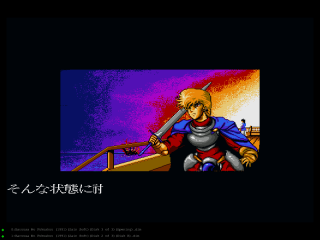 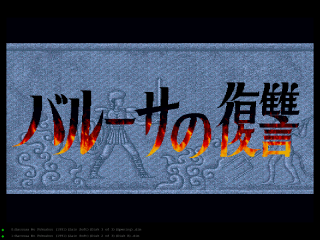