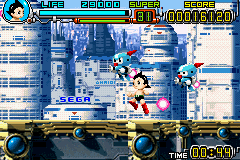 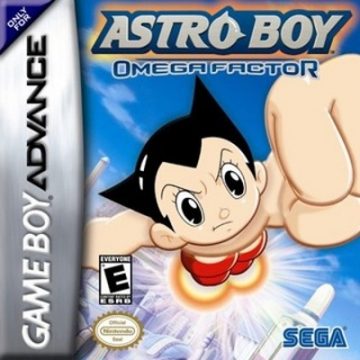 In the Game Boy Advance and DS era, there was a rather annoying trend amongst certain publishers – releases of major titles should be accompanied by a scaled down portable version. It’s most prevalent in licensed or kids titles, but it happens with other properties, usually with less than desirable results. After all, did we really need a DS rendition of Assassin’s Creed? But in a small percentage of these releases, the portable version actually ends up better than the console rendition. Sierra’s Eragon and Ubisoft’s TMNT are quite a bit better on the GBA than any other platform, strangely enough. One of the largest discrepancies in quality is within Sega’s Astro Boy titles. Released for both the PlayStation 2 and Game Boy Advance, they were published in 2003 to promote a new Astro Boy television series, which in itself was largely forgettable. The PlayStation 2 game is similarly mediocre, but the Game Boy Advance title is one of the best action titles on the system. On paper, it’s easy to see why – the GBA version was developed by fan favorite developer Treasure, in tandem with Sega’s Hitmaker division. 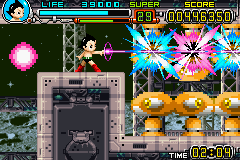 For the most part, Astro Boy: Omega Factor is a fairly standard beat-em-up, although unlike Double Dragon or Final Fight, all of the action takes place on a single plane. Astro Boy’s standard attack is a punch, which provides quite a wallop, but you can also kick enemies across the screen, knocking them through other foes. Being a super robot, you can also fire a straight laser out of his fingertips, which damages all adjacent enemies, but is pretty weak and leaves you open to attack. As you crunch through hordes of enemies, you’ll also fill a power meter, which can be used to unleash two types of special attacks – a super laser, which works much like the standard laser, but is much more powerful and fires for a few seconds, and the machine gun attack, which causes little barrels to pop out of Astro Boy’s posterior and deal a bit of damage to everything on the screen.

Most of the stages are fairly straightforward, as you advance a few steps, kill all of the enemies that the game drops at you, then continue onward. There are only a scant handful of foes to face, but it often tosses shrunken, tiny or gigantic, pixellated versions of standard enemies. Occasionally Astro Boy will take to the skies for some shoot-em-up type levels, although these too are generally pretty basic. 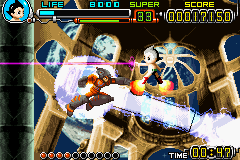 The basics of the plot are a bit similar to the 1979 movie Undersea Super Train: Marine Express – the writers have combined dozens of characters from a variety of Tezuka manga and given them a variety of roles, essentially making this game a huge tribute to his expansive library. Although it briefly recounts the origin of Astro Boy, the main plot is the usual “save the world from evil doers”, this time fighting against Sharaku from the manga The Three-Eyed One / Mitsume ga Tooru (who actually appeared in a very cool Famicom title of the same name, made by Natsume.) Some of the are halfway nonsensical cameos, and if you’re not a Japanese manga buff, it’s all largely irrelevant, but there is something amazingly cool about Astro Boy getting advice from Blackjack, the ace surgeon, or talking to Unico the baby unicorn, or rallying against Duke Red from Metropolis, or meeting up Phoenix upon getting destroyed in the game’s first finale.

Yes, “first” finale – Astro Boy: Omega Factor takes from the pages of the cheapest of 8-bit video games and requires that you play through the whole game twice to get the real ending. The second playthrough features a whole new trippy plot, and opens up even more hidden characters and a few hidden stages, if you’re up for looking for them. It also allows you to replay any conquered levels to look for more stuff. 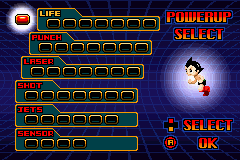 Hunting down all of these characters is useful for more than just fan service, of course – with every character you find, you can upgrade one of Astro Boy’s abilities, including his health, attack power, laser and machine gun strength, and jet boosts. The jet boosts in particularly are pretty fun, because it allows you to fly forward and change directions multiple times, a welcome twist on the usual double jump mechanic. You can also upgrade your “sensor” ability, which makes certain levels easier, allowing you to see in the dark or through thick steam.

For a Treasure game, Astro Boy: Omega Factor is oddly restrained – the level designs are fairly nondescript, and the boss fights are entertaining, but not quite up to the standards of some of their better games. The most noteworthy include a giant spinning globe which starts out small and slowly grows to take up nearly the entire screen – a nice reference to the rock monster from Super Castlevania IV – and a run in with Pook has him turning into a variety of forms, similar to Seven Force from Gunstar Heroes. Undoubtedly this cutback is a caveat on working with a licensed property, but even though it lacks some of the trademark invention, it’s still a remarkably solid game, and flies circles around the dull 3D PlayStation 2 game. Of Treasure’s other GBA games – Gunstar Super Heroes and Advance Guardian Heroes, sequels to established properties – both falter a bit, the former for lack of focus, the latter for lack of punchy, fun mechanics. In this regard, Astro Boy: Omega Factor is refreshingly uncomplicated, and its straightforward manner is refreshingly welcome, if only because wailing on enemies three times your size and sending them spinning across the screen is remarkably fun. 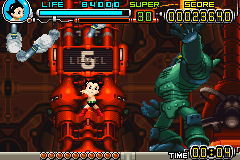 The North American and European versions were released several months after the Japanese version, and has a handful of additions. The Japanese version only has two difficulty settings – Easy and Difficult. The Easy setting is so simple as to make the game completely boring – you can take numerous hits, and have an almost unlimited amount of super attacks. The American and European versions have three settings – Easy, Normal, and Hard. Normal is a slightly rebalanced version of the Japanese Difficult setting, and Hard is much, much more challenging. The American/European version also adds a health meter for the bosses, adds a couple new enemies, and fixes some of the slowdown.