The Atari age was an essential formative phase of video gaming, but for many players nowadays it’s rather hard to go back so far in technology, and only few have as fond memories left for it as for the NES or various home computers from the 1980s. There are, however a few games that are still worth checking out for more than just historical interest, and the majority of them came from Activision. Remember, this was before the publisher became a representative for the evils of video games big business, back when it was just founded by former Atari employees as the company that would honor the interests of game designers. H.E.R.O. was not developed by one of the former Atari guys, but John Van Ryzin, who had previously programmed a few games for Apple II computers. Nonetheless his work for the already outdated VCS belongs into this pantheon of must-play games for the system.

H.E.R.O. is the quest of Roderick Hero (no really, that’s his name as given in the manual) who descends into a mining shaft shaken up by volcanic activity to rescue the miners trapped within Mount Leone. But Roderick doesn’t go on his mission in any conventional way. With a propeller mounted to his backpack – after all, this is a Helicopter Emergency Rescue Operation – he takes to the skies (or at least above floor level in the underground caverns) to make his way through the destroyed tunnels.

Controlling the propeller takes a bit getting used to, but is genius for the simple controls available. Pressing the joystick up doesn’t lift Roderick up immediately, instead it takes a short time to gain momentum. This is crucial to take into account when maneuvering the mines, as the only way to get lower is to drop down, and sustaining height requires small, well-timed boosts. As long it keeps going downwards things are fairly easy, but the later stages often require the player to traverse the screen horizontally and strike a balance in between deadly pits and just as deadly red-glowing magma walls.

The propeller isn’t the only tool the hero has at his disposal. From the very beginning, thin walls often block the way and have to be blown away with dynamite. The supplies are strictly limited, and from about halfway through all the stages are designed for perfectly efficient dynamite use. When running out of explosives, it’s still possible to shoot down the wall with a head-mounted laser gun, but may take more time than Roderick has – a power bar is constantly depleting, and when it runs out, the hero dies. The primary use for the laser is thus to fend off the various creatures of the deep, mostly spiders, moths, snakes and bats. Neither of them is particularly active, but placed in a way that makes it often impossible to avoid confrontation.

The default direction to go is downwards. But H.E.R.O. has no scrolling, and thus the screen flips each time when the protagonist flies over the edge. And this may be the game’s one great flaw. Usually there are two or more ways going down, but it’s impossible to tell beforehand which is the right one. This is exploited for a number of cheap kills. When Roderick gets more luck, he just goes down a dead end, or accidentally kicks out a lamp, enshrouding the current screen in darkness, where only the hero and the critters remain visible. It’s not all that bad, because it doesn’t take long to learn that the seemingly most bothersome way is usually the right one. It’s still not the greatest part of the design, though.

Later in the game, the stages get more and more sideways parts, which usually involve crossing an underground river. Sometimes there’s a raft which brings the hero to the other side, but more often his aerobatics are in demand. Tentacles reach out of the water to punish those who get too close to the surface. These screens are much more skill based than the descending parts, and quite difficult. At the end awaits a miner to rescue, which immediately ends the level. No need to actually drag them back up, fortunately.

H.E.R.O. consists of 20 stages, which get exceedingly longer, with ever faster enemies. Afterwards it goes into a loop from stage 13 to 20. While there is no proper ending, the game stops once one million points are reached, which takes quite a few runs through the ending loop. The only other challenge is the Pro mode in system variation 5 (1 through 4 just let the player start at different levels), which always starts on level 17, but then proceeds in random order.

The original Atari VCS game looks a bit abstract, with its mono-colored, perfectly smooth walls. It had a nice waving water effect at the lowest floor of each stage, but that’s as far as the eye candy goes. The game was also released for the VCS’ successor, the Atari 5200, as well as Atari’s 8-bit computer line. These versions, programmed by The Softworks, add texture to the walls and display those that can be destroyed in a distinguished grey color. They’re virtually identical, aside from a weird glitch on the 5200, where the delay in thrust only applies when trying to take off from standing still, but not while running or already in the air. 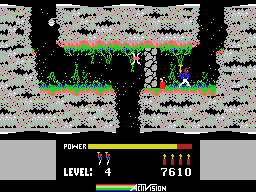 The ColecoVision (and identical MSX) port gets rid of the segmented graphics for more natural looking caves, and even adds some grain and stalactites in the background, but in some color variants enemies can be hard to make out in front of them. The Commodore 64 version is based on the same template, and its less saturated color palette compared to the ColecoVision (at least in emulators) suits them much better. The Apple II version, programmed by Microsmiths, is closer to the original, but has particularly hideous wall textures. But the only version that manages to look worse than the original is the ZX Spectrum port, whose most laughable feat is displaying the Activision logo rainbow in only two colors. 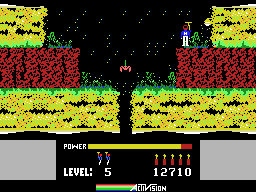 Aside from the cosmetic changes, however, H.E.R.O. is essentially the same game on each platform. The same cannot be said of the SG-1000 version, programmed by Sega. Not only does it replace the propeller with a much cooler jetpack, it also introduces a number of new elements to the mix. Most of them are traps, ranging from crushing walls to lava spurts springing from the ground. Most annoying are the falling stalactites, not least because they completely break one particular level, where it seems impossible to get past them without a thousand tries and a big portion of luck to counter the glitch with another glitch. By the end the game also starts to look really monotonous, because all the walls in all stages are the same green tone (albeit with somewhat different rock patterns). On the other hand, it does have a few added nice touches, like turtles replacing the rafts. The hero still mainly saves miners, but there are also a few girls that hand him hearts when rescued. 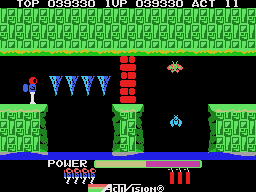 Sadly, Sega’s attempt at expanding the game is the closest H.E.R.O. ever got to a sequel. The creative heads of Activision’s early days would eventually leave the company and found Absolute Entertainment, and the new management at Activision never cared about any of the old IPs other than Pitfall. It’s a shame, really, for H.E.R.O.‘s concept just reeks with potential. The year 2011 saw the appearance of an unofficial fan remake for Windows, although that is just an exact replication of the Atari 8-bit version. The Atari VCS original is also on every version of the Activision Anthology for various systems and can be played in Microsoft’s Game Room.

In 1994, a shareware game named H.E.R.O. was released for Atari ST, but it has nothing to do with the Activision game except for the title, and the acronym stands for “Human Extraction & Rescue Operation” here. It’s closer akin to a cinematic platformer like Prince of Persia or Flashback, and it’s also ridiculously hard. 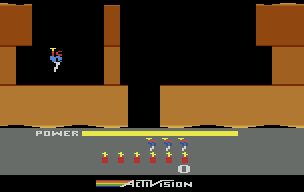 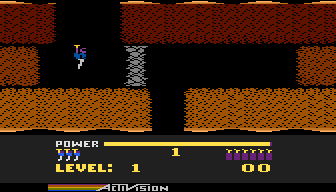 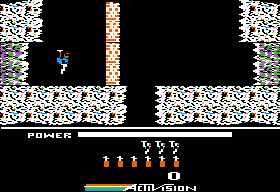 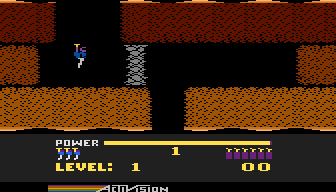 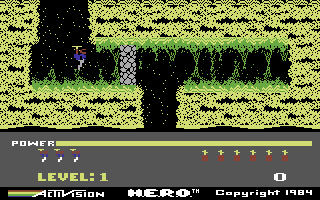 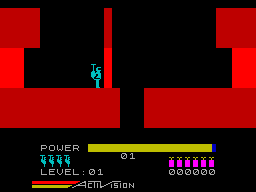 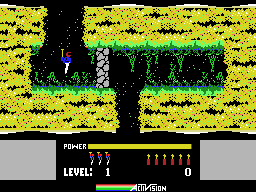 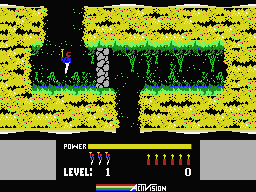 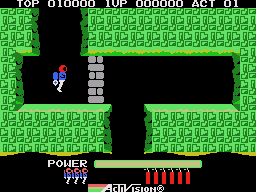 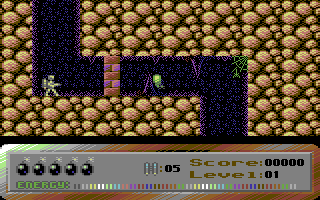 Ten years after H.E.R.O., the German Commodore 64 disk mag Magic Disk contained a game that was an almost exact copy of the gameplay in Activision’s classic. Dark Caves had new (ugly) graphics, new levels and a few new enemies, but everything was built upon the same mechanics: The floating device (here a jetpack), the head laser, the bombs, the waving liquid at the bottom of the screen… The only truly new element are some bomb and health recharges to pick up, and even they appear rarely. Gone are the lamps that turned the screen pitch black when kicked out – so much for the title of this game – and at the end of each stage doesn’t await a lost miner, but simply a door leading to the next cave. 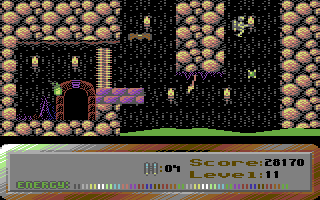 On paper, Dark Caves sounds like the ultimate fodder for fans of the original. Unfortunately, the level design isn’t very good. The first few caves are devoid of any challenge and thus boring. Afterwards the game gets hard quickly, but difficulty is achieved mostly through cheap tricks. The most common trick to kill the player is simply incoherent stage layout – quite often the hero walks on solid ground out of one screen, only to find himself immediately above deadly acid in the next. There are also some very annoying screens where the background looks almost the same as the wall, and at some points the level loops over and over again until the player finds the nigh invisible passage. Other than the original, where it was possible to get through all mandatory walls by detonating them, here it’s often required to slowly and tediously blast them down with the laser. 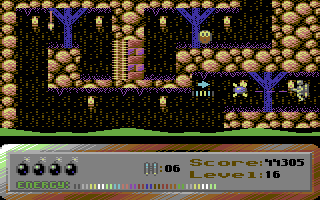 Dark Caves is even shorter than H.E.R.O.. It has only 18 “proper” stages, After which follows a weird Tetris challenge to defuse a bomb – instead of clearing rows, the goal is to fill a rectangle area at the bottom entirely with blocks. Needless to say, there isn’t much substance to this, and afterwards the game is over immediately. 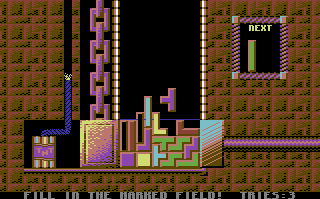