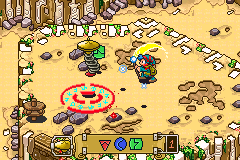 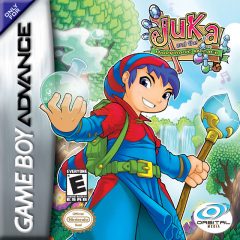 Game development is an exceptionally difficult process, and many developers don’t get a chance to make more than a few games. Orbital Media, a company based in Canada, was founded in 2003, but only released three Game Boy Advance games (and a DS port) before their closure in 2014, with no traces of activity in any other venture. The team made a strong first impression with Racing Gears Advance, an audiovisual spectacle that managed to garner critical acclaim from the likes of IGN, Gamespot, and 1UP in 2005. Their first 2006 title, Juka and the Monophonic Menace, was a different beast entirely, opting to combine exploratory adventuring with a simplistic alchemy system and a unique battle system. The game had the most lukewarm reception of the company’s three titles, failing to impress like Racing Gears Advance or provide a spin on a beloved formula the way the Metroid-inspired Scurge: Hive would in the same year. 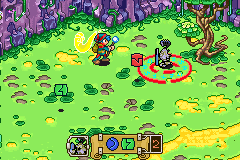 Juka and the Monophonic Menace was built on the shoulders of multiple cancelled projects and internal shakeups. When Racing Gears Advance was in development, an adventure game project was also being worked on by the team. Known initially as Treasure Hunt, it was later renamed Jukka’s Treasure. While the project never really got anywhere, some of the design elements used for it would be repurposed for Juka.  A second game, an ambitious strategy RPG called Pirate Battle, would also end up getting canned in service of getting Juka out the door, since the company was faced with a shortage of programmers at the time.

The game begins with an introduction detailing a peaceful land known as Obla, which was founded by Ancients with access to mighty sound machines. As one could have guessed, the peace wasn’t to last, as a group known as the Dark Alchemists would attempt to control the Ancients’ machines for nefarious purposes. Though the Dark Alchemists were defeated after the Great War, one of them, known simply as the Menace, would somehow return years later. Juka, an alchemist of the modern era, gets wrapped up in the conflict of the past and is tasked with defeating the Menace once and for all.

Despite the established backstory, the plot falls flat as many elements go woefully underutilized. Obla’s history is never detailed further, and the Menace’s motivations never go past evil for the sake of evil. NPCs are lucky to get more than a few lines, and certain plot elements, such as the disappearance of the villagers, barely matter in the long run. Most of the game’s dialogue is between Juka and his toad friend Bufo (likely named after the genus of true toads in the “Bufonidae” amphibian family), but they don’t come off as having any kind of chemistry. 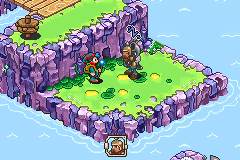 The character designs, while varied, all feel amateur in the way they’re presented, with indifferent facial expressions and dull portrait colors that aren’t visually appealing. The story is presented almost exclusively through still images, with only Juka getting multiple portraits. During gameplay, there’s a variety of animations for Juka, like an expression of shock for when he gets frozen and a particularly charming animation of him going to sleep when you save, which help to compensate for the lacking presentation elsewhere.

The adventure takes place over the course of five massive areas, with each one containing well over a dozen connected rooms. The ideas for each area are uninspired, including things like a meadow, a snowfield, and some ruins. In order to advance the game past a certain point, you’ll need to find four keys scattered about the first three areas. Aside from these, there are upgrades to find, NPCs to talk to, and minigames to participate in. The rooms in each area look identical and are far too big and empty compared to how slowly Juka walks, which takes the joy out of the exploration. There aren’t any gimmicks or puzzles until the final areas either, so there won’t be much to distract you from the extremely loud sound of Juka’s footsteps.

In your travels, you’ll find ingredients in six different colors, each originating from a different source. For example, to get green ingredients, you’ll have to shake trees, whereas the blue ingredient is only found in bodies of water. Ingredients can also be produced anywhere by utilizing the instruments you win from playing the minigames. In a clever bit of verisimilitude, manmade environments like the castle at the end of the game are entirely devoid of natural resources, so instruments become essential. 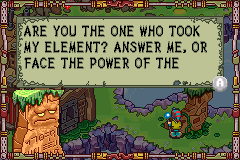 By combining ingredients of different colors and in amounts ranging from one to six per ingredient type, you can create ten different types of potions, the recipes for which are thankfully saved in your journal as you acquire them. Some potions, such as the sleep potion, incapacitate foes, whereas other potions such as the unlock potion give you access to certain levers. Disappointingly, half of the potions simply act as keys to arbitrary locks (The Yeti potion is used exclusively to start minigames, for example) and don’t bolster your moveset in any meaningful way. Potions also have the drawback of being ineffective against mechanical foes until the Menace’s Monophonic Spell is disabled towards the end of the story. Once this happens, the system becomes more interesting, as you can now reapply your existing arsenal in clever ways to end fights quickly – Whirlybirds that were once a nuisance can now be taken down by using a slow potion to make them unable to fly and the Aquascopers that patrol the water can be put down with a single sleep potion.

In most cases though, you’ll be engaging the Menace Machines with Juka’s trusty sound staff. The sound staff provides Juka with a shield that can take a number of hits before his vitality is affected and it also has light and dark options in combat. The light shield is your primary attack and is used to capture enemy projectiles. All machines shoot projectiles in varying colors and shapes, and you’ll need to catch them in the correct order displayed at the bottom of the screen before you can charge up your sound staff and launch a shot back at them. If you get hit or catch the wrong projectile, you’ll have to start over, and tougher enemies can require at least six projectiles to be caught before a counterattack can be mounted. The dark shield can be used to absorb projectiles to heal Juka’s sound shield and it single handedly eliminates any potential challenge, since it effectively makes Juka invincible and can be deployed indefinitely. Despite this, the game does an admirable job of mixing up the encounters with different combinations of foes, some of which shoot special projectiles that can’t be caught or shoot several projectiles in spread-shot patterns that are harder to read.

The biggest issue with the combat lies in the slowness inherent to its implementation. Since you’re always playing defense, combat is nothing more than a waiting game. It can take several shots before you have what you need to fight back, and the enemy AI has a bad habit of wandering around or shooting at walls. What should be a dynamic dance between enemy salvos ends up being a chore more often than not, one where you’re just waiting for the chance to get it over with. Boss fights do nothing to alleviate the tedium either, since they’re more often than not just encounters against waves of enemies you’ve already fought. 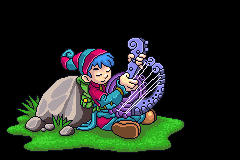 In the early parts of the game, you’ll get to deal with thieves and soldiers too. Since they’re not mechanical, you can’t engage in combat with them and are encouraged to use stealth to avoid them or sleep potions to disable them. Amusingly, they’re far more dangerous than the Menace Machines, since their projectiles are incredibly fast and, in the soldiers’ case, pierce your sound shield and hit Juka’s vitality directly. These foes disappear entirely by the time you’ve made it to the ruins, which is a shame since they add some much needed variety to the proceedings.

The soundtrack is notable for being one of Jake Kaufman’s earlier works, who’s known for his excellent work on Shovel Knight and the Shantae series, and it helps inject the game with a bit of energy. In particular, it resembles Grant Kirkhope’s work on Banjo-Kazooie, what with its use of leitmotifs as well as an upbeat, almost goofy tone that’s readily apparent in tracks like the one used for the minigames. 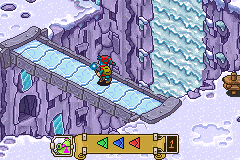 While Juka and the Monophonic Menace is a deeply flawed title, it’s easy to imagine the potential that a sequel could have had considering Orbital Media’s ambitions. Juka will never make the rounds as a hidden gem, especially since it has a game breaking bug in the PAL version, but for the open minded, there are certainly some unusual ideas here, if nothing else.