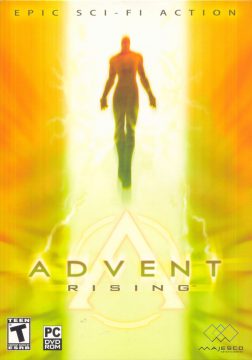 There are a few games out there with a sort of legendary status behind them for the most unfortunate of reasons. Duke Nukem Forever, Sonic 2006, Metroid: Other M. You see giants fall flat on their face from time to time, and it’s always some sort of generation defining event. Sometimes, it’s just a pretender to the throne who made enough noise to draw notice. Towards the end of the OG Xbox’s life span, we got one heck of a disaster for the era’s closing in Advent Rising. It was being billed as the start of a massive franchise, with a legendary sci-fi writer behind it, and GlyphX’s step into the big boy world of game development.

Things did not go as planned.

Before we get started, we need to stop for a moment and talk about what is the most remembered part of this story: Orson Scott Card. If you have been living under a rock for the past few decades, Card is one of the most famous science fiction writers of the modern era, and deeply influential with works like Ender’s Game under his belt. He is also hated by the vast majority of people these days because he is extremely homophobic and generally hateful about most types of people. It wasn’t common knowledge at the time. He wrote the screenplay for this game…yet very little of his influence can be felt on the final game outside some reused sci-fi slang from his novels. He is probably why you remember Advent Rising if you do, and why it got hyped initially. Somehow, he is the least interesting part of all of this.

Worth pointing out that GlyphX were originally a studio that did artwork for game ads and box art, including the box art for Soul Reaver, Unreal Tournament 2003, and the PSX Spider-Man games. This was their first game, and they were selling it hard, using Card’s name and a promise of an entire trilogy on multiple consoles to do it. They even had a contest to find hidden symbols in the game for a chance at a million dollars, billed as the “race to save mankind,” though they realized too late they had no way to decide who found everything first. Majesco offered some free games to all contestants as an apology. Those games included Psychonauts and Guilty Gear X2, so hey, not all bad.

The game itself was an ambitious soap opera, following a pilot named Gideon finding himself present for the eve of humanity’s extinction. The first instance of alien contact results in the peaceful Aurelians warning humanity that another race is coming to wipe out their race and it was kind of their bad (whoops!), and then about two minutes later, BAM, four legged lizard men are comically punching people to death and colony dropping planets. Gideon’s goal is to just survive and try and figure out a way to take down this second race, known as the Seekers, eventually awakening to super powers in order to do so.

Writing wise, Advent Rising being a first of a trilogy results in the whole game lacking the emotional weight it requires to work. Gideon’s brother and love interest are bland stereotypes with lines so bad they’d be too lame even for Top Gun. The love interest is introduced kicking a guy in the balls. This is the most you know about her before the mass genocide begins. There’s also a weirdly comedic feel to the first half of the game, which feels partly intentional at times, or just due to the silly rag doll physics or exaggerated animations. Things do pick up considerably later, but the foundation is in pieces and can’t support that drama, making it too little, too late. Will Friedle (Batman Beyond, Ron Stoppable from Kim Possible) does try hard to sell things as Gideon, at least.

The game itself is a lot. You can’t fault the team for going all out, making up for the limited hardware and wonky physics with huge maps and a ton of bad guys and explosions. The universe does feel huge, even with unexciting texture work and art direction, and the cutscenes bring a ton of life to the expressions of the cast. This does feel big, even is lacking the polish of first party games from the era. It even has a cinematic style soundtrack, not terribly memorable, but effective for mood in the moment.

Actual gameplay is fairly standard third-person shooting in the era post-Halo 2 but pre-Resident Evil 4. You can move around with a camera to your back, shooting down the center of the screen with guns you picked off the ground. You also have the option to dual wield any gun in the game, with any combo. This is fun, but has the drawback of the game’s character animations and physics occasionally freaking out if you are using a large weapon or two at once. It is not uncommon to accidentally blow yourself up because your rocket launcher using arm got locked to your side somehow.

The aforementioned rag doll physics also cause some feedback issues. You only get knocked back from explosions and getting pounced, and it takes a moment to get back up. Otherwise, hitscanning gunfire just damages you over time and you probably won’t notice how bad you’re getting hit until the low health warning sound starts. Rag doll physics were not exactly a great resource for making subtle damage flinches. Enemies also spawn from all directions, including behind you, so it is very possible you won’t notice where the gunfire is coming from. This makes the first half of the game very frustrating, and the general jank of the game less charming and more obnoxious.

The first half of the game is very difficult, not helped by the only way to heal is to use sparsely placed med-stations. The second half is another story. This is when Gideon discovers his super powers, the first being the ability to heal automatically to full by just not getting hit for a few seconds. The second is moving things with his mind. The third is a force push that instantly crumples most enemies, and that’s where the difficult completely flips from too hard to a walk in the park, especially as you level up your skills.

Advent Rising has RPG elements, allowing you to improve your skills the more you use them, not unlike Final Fantasy II but in a real time action game context. Play an action game as you are expected to play it, and you gain new powers and damage buffs naturally overtime. This starts with slowly getting better with weapons and unlocking alt-fires, but once you get powers, you can also improve your jumping and hand to hand skills. The enemies stay mostly the same through the entire game, but Gideon gets ridiculously powerful, able to go through large chunks of the game without actually needing to use a gun to kill everything around him. This is where the potential of this game starts to show, and makes how end ends all the sadder.

Advent Rising ended on a cliffhanger, and it never got proper continuations outside some comic tie-ins. The other tie-ins never saw the light of day, let alone the sequels, due to a mixture of poor review scores and bad sales. The game in general is buggy, but that initial Xbox version was the buggiest of them all, which did it no favors. In the end, the game was seen as average, and that is an accurate summation. As far as average games go, though, it’s kind of spectacular, something that reached for the stars and nearly got there until a meteor smashed right into it.

Perhaps the strangest part of all of this is the main two people behind this game, Donald and Geremy Mustard, are still working in the industry at Epic on Fortnight in positions of power. GylphX met a sudden end and Majesco had a slow bleeding out, but the Mustard brothers are now responsible for The Fortnite Burger and possibly had something to do with fighting back against Apple with a unicorn hammer thrown at a propaganda video in reference to a thirty-year-old ad kids playing Fortnite have never seen. It’s a small, strange world.

Advent Rising is worth trying, both as a curio of gaming history and as a game in itself, despite the very rough first half. It tried hard, and that effort shines through more often than not. Even the association with Card’s homophobia hardly impacts it because it seems like they just asked him to insert some lingo from his body of work and he called it a day (though he was also going to write some universe expanding novels at one point so who knows). It’s a mess, but a fun mess, a precursor to the buggy chaos that was the seventh generation middle market.