A top secret jet fighter known as the Stealth has been captured by a mysterious enemy. Intelligence points to its last known location in the (fictional) Latin American country of Santa Paragua. The only one who can save the world is secret agent Bond, James Bond… or John Glames, depending on which version you’re playing. 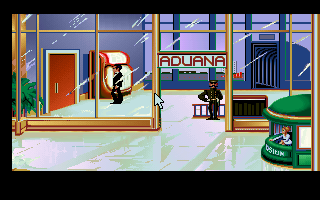 Operation Stealth is a weird game, in that it was developed to be a huge Bond rip-off (or homage, depending on your level of cynicism). However, when it was released in America, the publisher Interplay acquired the actual 007 license, and thus changed the game ever-so-slightly. Some of the dialogue has been amended to fit a little better, mostly to add in familiar names. But otherwise both Operation Stealth and James Bond 007: The Stealth Affair are essentially the same game. Oh, and kindly disregard the Max Headroom look-a-like on the cover of Operation Stealth – in game, it’s clear who the hero is meant to be.

It’s definitely got all of the major proponents of a Bond film – the technological gadgets, the exotic locations, the femme fatale, the arch villain with his own island and army of goons. But it definitely all feels like more a parody than anything else. The lady pal, Julia, walks with an absurdly exaggerated swagger. The dialogue, while not particularly well written, has an air of cheekiness around it. The nemesis is named Doctor Why. It’s not exactly a comedy, but it’s not really played straight either. This actually comes off better when you’re the Bond clone Glames. As a part of the official 007 canon, it doesn’t quite fit. (Then again, the same could be said of the some of the movies.) 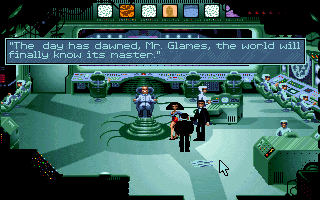 But it does beg the question – is James Bond even an appropriate license for an adventure game? He gets to use cool gadgets but doesn’t actually do much brainwork, and he’s much more of an action hero than a detective. As such, most of the puzzles are heavily contrived. The very first task involves checking the coin slot of a vending machine, then using that money to purchase something. This event was directly lifted from Future Wars, and the narration text even makes vague reference to it, but is this kind of thing James Bond does – rummage for change?

The rest of the opening segment, which takes place in an airport as you falsify passports and steal various bits of luggage, is remarkably mundane. (And also ridiculous – if you give the customs official the wrong passport, you’re immediately jailed.) The rest of the early parts are spent doing exhilarating things like exchanging currency (twice!) and buying flowers. When you take your elevator to the top floor of a hotel, your path is blocked by a housekeeper who just refuses to move. Instead, you need to take the elevator to the floor below, walk up the steps and saunter around her. 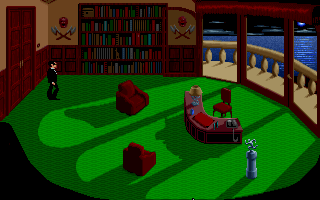 Eventually Operation Stealth realizes that Bond movies are really all about action. And that, unfortunately, is where it stumbles even more. Action sequences in adventure games are usually terrible, and this game does nothing to disprove that rule. The first involves swimming through a series of dangerous rock formations, while your air meter precariously drops. Two others are overhead maze sequences – one dodging guards in the back stage of a theatre, another swimming to avoid dangerous piranhas. And there’s a 3D chase sequence aboard jet skis. None of them control well, and all of them are intensely frustrating.

Operation Stealth was designed using the same Cinematique technology as Future Wars. It has been slightly improved so Bond/Glames will walk to an object if they’re not close enough. And there are less pixel hunting issues, although it’s still quite possible (and probable) to get stuck in dead ends. In one particularly frustrating bit, you get captured and get to listen to your enemy prattle on, like any good old Bond foe. You’re supposed to activate something in your inventory (if you found it prior, anyway), but there’s no indication you can access any of your items, as it appears to be a standard noninteractive cutscene. 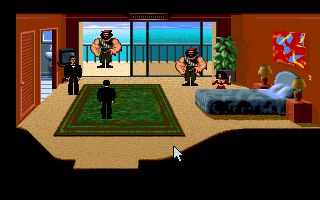 The Amiga version of Operation Stealth has an interesting feature. If the user has enough RAM and the proper operating system, it can use the computer’s speech synthesis libraries to read all of the lines aloud. Given how basic the technology was in 1990, it’s all done in the same monotone Stephen Hawking voice, and it constantly (and humorously) mispronounces words, because the writing was not redone to account for its defects. It’s also extremely buggy and is liable to crash the system. Points for effort, though. 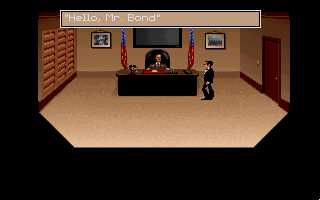 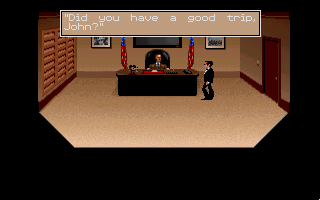