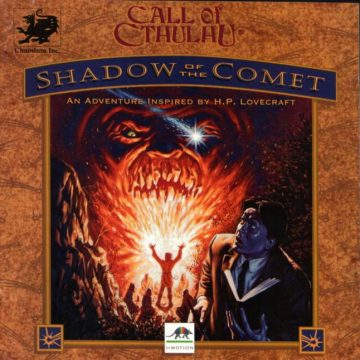 Born in 1890, H. P. Lovecraft is perhaps the premiere American horror writer. His stories fed off one of the most basic of human fears, that there was something horrible lying just outside of the realm of the senses, incomprehensible to both science and religion. Many of his works are categorized as the Cthulhu Mythos, connected works of fiction about a series of deities of unspeakable grotesqueness, far older than humanity, who are simply biding their time until they can return and reclaim the world for themselves. Many of his short stories revolve around a normal person who somehow stumbles upon one of these abominations – or perhaps, cultists who worship them – and is either driven to madness, or, if he’s lucky, brutally killed.

Lovecraft’s works have inspired many auteurs, who sought to replicate the same brand of horror, either officially or unofficially. One of the first such works was Infocom’s The Lurking Horror, developed in 1987, and several other later games, including Silicon Knights’ Eternal Darkness and Darkling Room’s Dark Fall practically rip off the concept wholesale, despite not technically being related. A company called Chaosium, who had published the Call of Cthulhu pen and paper role playing game in the early ’80s, decided to produce their own line of official games, which were led by a development team from Infogrames in France. Their two games – Shadow of the Comet and Prisoner of Ice – were not explicitly based on any Lovecraft story, although very specific elements were drawn for both, and any fan should be able to recognize their influences. 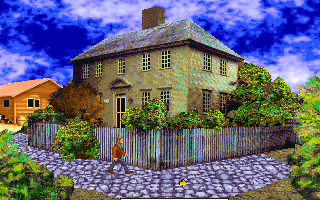 Shadow of the Comet focuses on Halley’s Comet, one of the most well known astronomical phenomena, appears visible from Earth once every 75 years or so. In 1834, Lord Boleskine traveled from his home country to England to the quiet New England town of Illsmouth to get a better glimpse of the comet in action. He went mad and spent his remaining years in an insane asylum. Upon the next scheduled visitation in 1914, British journalist John Parker stumbles upon the story of Boleskine and becomes fascinated. He sets off to cross the Atlantic and attempts to follow in Boleskine’s footsteps, with some impediments – mostly, anyone that knew of him is either dead, crazy, or simply refuses to speak of him.

Parker spends three days in Illsmouth, and the first day is spent interacting with the townspeople, who show varying degrees of friendliness or hostility towards his presence. It’s only when Parker sets off to photograph the comet during that night when things start to get freaky – he happens upon a strange ritual in the middle of the woods, and upon developing his photos, discovers a pair of eyes staring directly at him. Further investigation reveals a group of families worshipping the demons known as The Old Ones, who, when called upon, will consume the Earth in their chaos.

The town of Illsmouth is obviously supposed to be a reference to Innsmouth, from The Shadow over Innsmouth, one of Lovecraft’s most famous stories and one of the core elements of the Cthulhu mythos. Despite both being small towns in Massachusetts, they are clearly different settings – Innsmouth was a creepy, run down village full of off-kilter locals, while Illsmouth, on the surface, seems relatively normal. Therein lies most of the intensity, however – one goes into a Lovecraft story knowing that there’s something insanely sinister behind the scenes, but it’s all the build up that proves the most suspenseful. It’s not until the later moments of the game that the real creepy monsters show up, making their appearance all the more impactful. 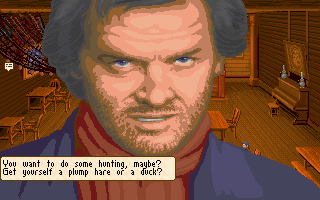 Nope, not modeled after Jack Nicholson at all!

The visuals do a fantastic job of building the creepy atmosphere. While the character sprites are unimpressive, the backgrounds are exquisite, with gorgeous pixel art that, at times, seems like it’s based off real photos, and perfectly emulates the small town feel of a turn-of-the-century American town. Many of the townspeople are portrayed with full-screen portraits of their faces, many of whom are blatantly based on various American actors and actresses, ranging from Vincent Price to Jack Nicholson to H. P. Lovecraft himself. Certain actions, like picking up items or unlocking doors, are also accompanied with a close-up cinema using rotoscoped graphics, reminiscent of similar cinemas in Out of This World and Flashback.

The music, too, is surprisingly tense, and even the Adlib FM synth is remarkably capable in generating an extremely unsettling mood. There are only two real songs that loop continuously for a good chunk of the game, but they’re so well composed that it’s hardly an issue. The voice acting in the CD-ROM version is strange, because so much of the acting is extremely monotone. While this could be viewed as evidence of poor acting, in the context of the game, it actually fits the rather unsettling mood of the whole affair.

While Shadow of the Comet is something of a brilliantly done horror game, it’s let down by its rather unconventional interface. Despite being released in 1993, the game was not developed with the point-and-click interface in mind, and instead you’re supposed to use the keyboard to maneuver Parker. To look at or interact with something you need to be next to it and then select the appropriate command. Any item you can pick up is highlighted with a sight-line. Using items is accomplished by equipping them, after which they’ll be used automatically in the appropriate situation. It’s all very weird and non-standard, and for no good reason either. The CD-ROM version adds some semblance of mouse control, but instead of directly pointing to where Parker will walk, it simply controls his direction relative to the mouse cursor. (If it’s positioned to the left, you hold down the mouse button to make him walk left, and so on.) Parker walks slowly, although there’s a quick map that lets you instantly travel to the major points of Illsmouth. Alas, only a handful of places are actually highlighted, and navigating the town on foot can get fairly confusing. There are several houses in the town, but it’s easy to forget who lives where when there’s no general “look” command to help you get a bearing on your surroundings. 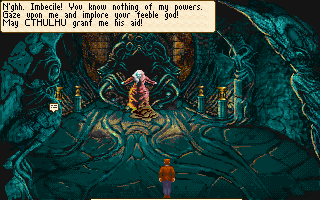 One of the horrors lurking beneath Illsmouth.

The interface is at its worst during the climatic sequence of the second night, when Parker discovers a series of catacombs beneath the town graveyard. Many screens contain bats, rats, spiders, spikes, and various pitfalls, all of which need to be carefully avoided solely with the cumbersome controls. More frustrating are the occasional chase sequences, where you need to exit through a series of rooms in an extremely brief amount of time. All of these death scenes are indeed a necessity to invoke the kind of horror these stories demand – what would be the point of a horror game if there was no threat of death? – but the controls really let the game down, and make these particular segments more frustrating than scary, at least after the first few attempts.

A few other factors can potentially irritate. There are a handful of possible dead ends, and a limited amount of save slots to counteract them. And for all of the halfway believable sorcery that comes with a story dealing with the summoning of ancient guards, the part where Parker escapes from a lighthouse by donning a pair of mechanical wings and jumping off is remarkably stupid. And yet, in spite of these pitfalls, Shadow of the Comet‘s other qualities ultimately overshadow everything else. It’s a creepy, ultimately fascinating game, and a fantastic realization of Lovecraft’s stories in an interactive medium. 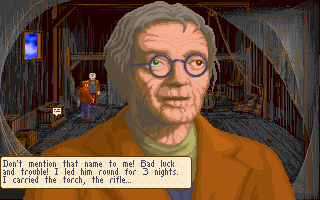 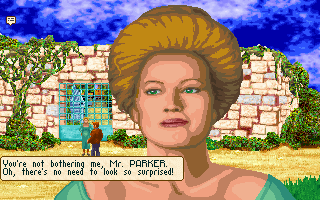 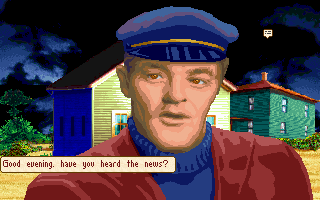 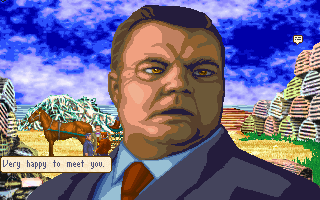 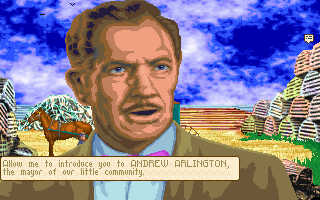 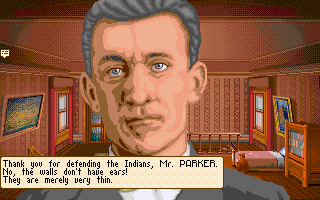