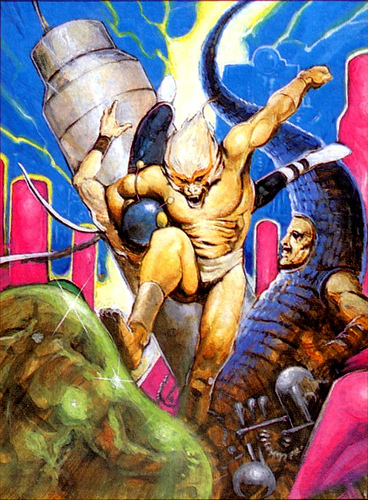 Some Japanese companies just never get a big break and remain veiled in obscurity, even by history. But who the hell remembers Seta? The makers of such not-quite-classics as 8 Eyes, Musya… The Wizard of Oz on SNES… it’s probably for the best if Seta remained in the dust, as they were mostly a mediocre to bad developer. Save for the occasional lightning strike like the surprisingly good Nosferatu, Seta just seemed incapable of making a big hit that would keep their name preserved in the fonder ends of game kind. Perhaps their much vaunted Bio Force Ape would have been the breakthrough they needed, but who’s to say it would have done any good for a developer without much presence to begin with? Still, it sounded enterprising in the previews section of issue #27 of Nintendo Power, billed as “the fastest action ever seen on the NES”. Before it could give Sega’s blue blaze a run for his money, Bio Force Ape got junked and remained out of sight for nearly two decades. 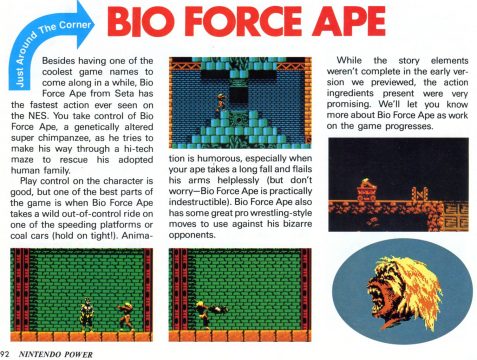 However, miracles are capable of happening even with old games everybody thought was dead. Discounting a ridiculous yet hilarious hoax surrounding the game in 2005 – where a forum poster claimed that the ape could fart so hard that it broke the in-game graphics, and one of the main bad guys was a butter monster – a legitimate prototype was purchased and dumped for public use in 2010, finally bringing the fabled Bio Force Ape to an actual playable state. As it turns out, the game itself is actually pretty fast, and it indeed starts a biologically enhanced monkey who becomes a hulking ape-man. What appear to be his family figures, a scientist and his daughter, are kidnapped by an evil green badman in a tophat. The badman then hires a sumo wrestler to push you off a very tall building where your arms flail wildly down a long fall, which doesn’t kill you when you land. You’re then face-to-face with what appears to be a bizarre hybrid of human and bumblebee, except a lot more muscular than The Simpsons bit character. He’ll try to sting you, but if you punch him multiple times, you’ll eventually piledrive him so hard that he bounces off the screen. Yep, this is indeed the almighty splendor of Bio Force Ape. 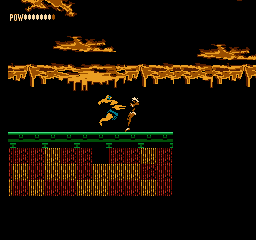 It’s almost impossible to give this game a straight review, as it’s obviously unfinished and can’t compare to a polished, fleshed-out product. It only has three stages which can potentially be beaten in a total of ten minutes, and the latter two stages are incredibly unbalanced in their challenge. The first stage, while not exactly a masterwork of virtual design, is more diverse than what’s ahead of it. The ape-man must reach the end of the level where the kidnapped daughter is being held, scuttling around through a factory inhabited by martial artists, ninjas, and more freakish creations like the bee-man. Be on the lookout for a kangaroo whose front arms and pouch are replaced by a man’s torso and a crocodile humanoid which uses the jaws as legs. You can actually run past most enemies, but should you stand and fight, you can punch them standing, kick them while ducking, or use damaging high kicks by holding up. Mutant enemies take a lot of damage but are slow and barely present much challenge, and you exile them from the screen with a pro wrestling technique when they’re weak enough. The human enemies just take one hit before flying away, but the ninjas can be aggravating, especially if they double team you. Combat is simplistic to the point of being boring, as you only need to keep running forward and punching to win. 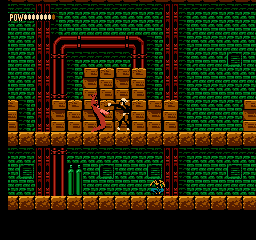 The platforming fares somewhat better, although ape-man has a bit of a delay when he starts to run or jump. The first level helps you get accustomed to the controls, where the factory is full of platforms that either fly you around at warp speeds or act as a trampoline. There are some ropes that you get to Tarzan across, and to compensate for your odd aerial movement physics, landings are several blocks wide to reduce worry about precision jumping. One segment requires you to jump up about twenty trampolines and then fall down through a pit of midair mines. You take revenge on the sumo wrestler from the stage’s beginning and take back the daughter from the badman, thus concluding the level. While not exactly Green Hill Zone, the first level does leave an interesting premise upon which the later two levels fail to deliver. The second stage takes place in a mine and has you ride around on carts, which looks impressive but you have no control. When the cart drops you off, you need to defeat the enemy in the room in order to progress. The carts merely serve as transitions to the next arena, so this stage is essentially pure combat, and the dead simple fighting makes this stage rather bland. 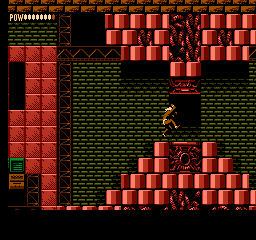 The third and final level has almost no fighting in contrast, but its demands for platforming are rough. It’s a giant maze where you need to jump on detonation switches and travel through teleporters, where some segments require you to jump on falling platforms or conveyor belts. These jumps are much harder than anything in the first level and mistakes force some frustrating backtracking, and the stage itself is already a bit baffling to navigate. Near the end are multiple teleporters where only one is the right way, and the wrong one warps you back to the beginning of the level, rotten trick that. If you do manage to reach the end, the badman appears and morphs into an ape-man exactly like you, but he unceremoniously loses with a single punch despite the transformation. 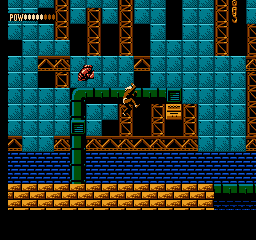 Taking it as it is, Bio Force Ape is a very confused game. The brawling elements are repetitive, the platforming is sluggish, and provided the last level doesn’t throw you for a loop, it can be beaten really quickly (your best times are posted if you win or die, one life only on that note). But without knowing how far along the game was in development before Seta axed production, it can’t be judged straight. The best thing to be said about its “final” state is that it looks and sounds great. The character animations are fluid and the freakish man-beast enemies are hard to forget. The backgrounds are well-crafted and have a slightly creepy darkness to them. The music is jaunty and each tune has a pervading percussion that almost rivals Sunsoft’s mastery of the NES sound format. On an artistic level, it’s rather impressive, but it’s too bad that this never became a fully realized game. It’s a wonder the prototype was ever dumped in the first place and everyone at least gets a semi-realized idea of what it could have been. Still, despite (or likely because of) its incompleteness, Bio Force Ape is ironically Seta’s most notable game, the unfinished requiem by an otherwise unremarkable outfit about a superpowered simian. 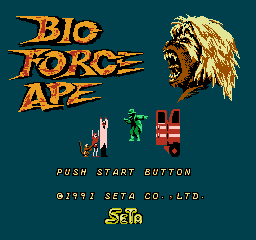 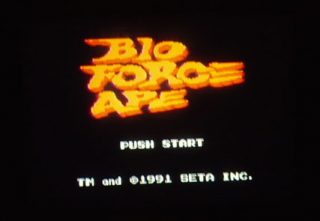 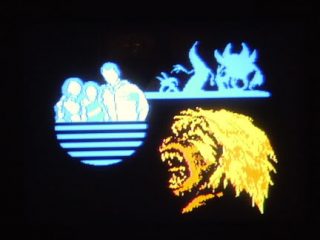 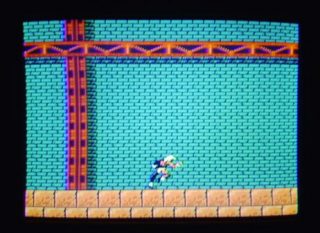 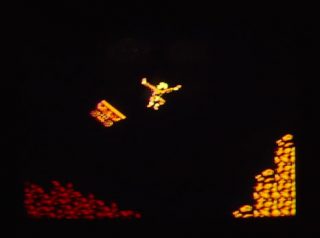 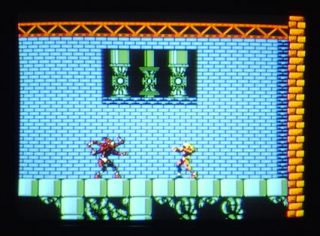 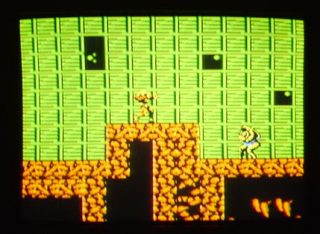 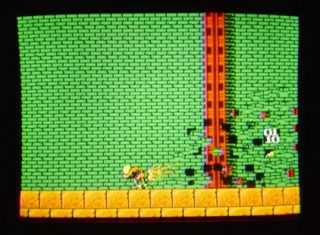 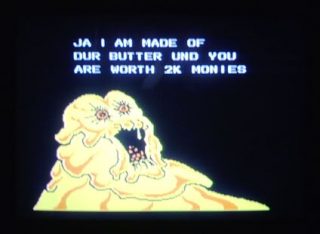 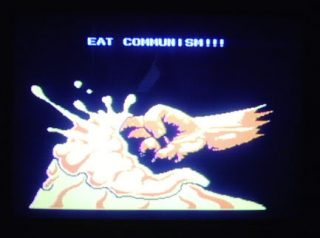