Sunsoft is one of many underappreciated developers who rose to prominence during the reign of the Nintendo Entertainment System. Somewhere in the middle of their original and licensed releases lies Journey to Silius, an unassuming run-and-gun game released around the mid-to-late portion of the NES’s lifespan. It’s easy to just take a quick glance at it and write it off as a Contra clone, adding to the glut of games which fall under the “shoot things in 2D with a gun that contains infinite ammo” genre which was quite popular at the time. To be fair, Journey to Silius doesn’t do anything incredibly original, but it is nonetheless a well-rounded game that has a modest cult following and an interesting development history.

Journey to Silius begins on a dire note that is actually illustrated in a bold cutscene at the beginning of the game, though the manual further elaborates on the backstory. In the year 0373 of the new space age, world overpopulation beckons the creation of space colonies so people can emigrate to them. Jay McCray is the son of a scientist working on colony #428 in the Silius Solar System (SSS), and Jay aspires to someday become a scientist like his dear old dad. Unfortunately, the SSS colony is obliterated in a cataclysmic explosion, and all known research is lost along with the lives of many, including Jay’s father. A grieving Jay finds a disk in his father’s room which tells him about terrorists who are likely behind the horrible destruction of the SSS colony. Full of solemnity and anger, Jay decides to take the fight to the terrorists and see to it that the SSS colony can be rebuilt after all opposing forces have been crushed. 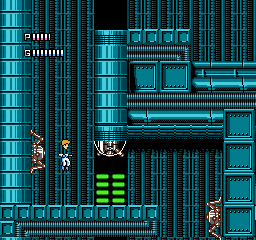 Perhaps the premise of a teenager taking the fight to a bunch of “terrorists” may be unorthodox, particularly as all of said terrorists are robots. Of course, this was the sort of logical detail that didn’t amount to a hill of beans back in the in the glory days of 8-bit technology, where single-entity armies were commonplace. (There is an explanation for the enemy forces to consist entirely of mechanical marauders rooted in the game’s origin, which will be elaborated upon later.) The game itself requires the player to guide Jay through war-torn landscapes, subterranean bunkers, and fearsome techno-bases to destroy the massive bosses at the end of each level. The action is carried out akin to most 2D platformers, as Jay runs, jumps, shoots, and avoids being killed despite the improbable odds against him.

You start out with a basic handgun and a three-way shotgun to wreck the enemy opposition. Before each big boss fight stands a sub-boss which, if conquered, drops a new weapon, eventually amounting to a total of six strong guns. This includes a quick-firing machine gun, a versatile homing missile launcher, a penetrating laser gun, and a giga-powerful grenade launcher. One could potentially just fight a way through the game with the default handgun, as it fires about as fast as the player can push “B”, but the extra firepower can be very useful in the many tight situations that ensue as the game rolls on. Each use of any weapon that isn’t the handgun consumes a bit of a blue special weapon gauge, which is naturally located below the pink lifebar. The only power-ups you ever normally find increase your weapon and life gauges, while life pick-ups unfortunately tend to be a bit on the scarcer side. Even weapon pick-ups aren’t handed out liberally, so you’ll have to be careful with your ammo. 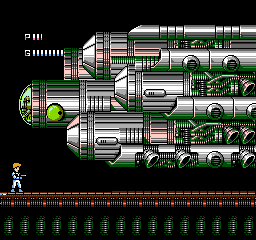 It’s too bad that booster items are somewhat uncommon, as according to the norm for much of Sunsoft’s output, Journey to Silius is a danged tough game to beat. Jay’s quest is only five levels long, but while it’s short by technical definition, a good deal more time will be spent figuring out how to get through certain segments while taking the absolute minimum of damage or avoiding nefarious pitfalls which can instantly screw your game. The first stage is a bit tougher than the beginning of most games, where missiles fall down pits and can drag Jay down with them if not careful, and laser turrets that can only be hit when they pop out of the ground to attack. Later levels bring in some more painful enemies, like wall turrets that constantly spray off bullets in a clockwise pattern, domed ceiling guns that might make one rue the inability to fire upward, and intimidating jetpack robots who swoop down on the player in a manner reminiscent of the infamous Red Arremer from the Ghosts ‘n Goblins series. 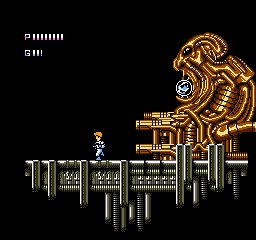 In between the destructible enemies lies a number of increasingly fatal traps, which the latter levels pour on thick. Mechanical presses, steel claws that drop down when getting too close to them, and blocks that plunge into a void the instant they’re stepped on; these are all jeopardies to watch out for. The final stage is impressive for having no actual enemies but bombarding you with many environmental hazards instead, all while the level keeps on auto-scrolling, forcing you to react quickly. If you think the levels are murderous, just wait until you get a load of the bosses, all of which are massive and quite impressively designed. Heck, even the sub-bosses fought before the big ones can be annoying, like an iron golem, which can only be hit in its head before it walks all over Jay, or a trigger-happy mech reminiscent of ED-209 from Robocop.

The end bosses are all really vicious affairs; a helicopter drops annoying leaping robots before facing you directly, a tank with a humanoid upper body and an extending claw to strike with, and a bizarre laser cannon that looks more like it belongs in the Alien franchise. Curbing the difficulty in Journey to Silius is the welcome factor of unlimited continues, and even though there is no password feature, the short length of the game makes it easier to bear when beating it in earnest. However, one only gets three lives before having to continue, and amidst the sparse checkpoints, losing all lives at any point will send you back to the start of the level, even on one of the boss fights. 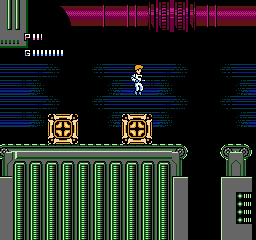 Now while the bosses are the most impressive-looking parts on the whole, the overall quality of the graphics cannot be denied. Journey to Silius is one of the finest looking games on the NES, just as most of Sunsoft’s other titles from Blaster Master onward looked marvelous. The backgrounds are usually rendered in different hues of the same color to create a monochromatic landscape, but they always fit the atmosphere and never feel bland. Enemies have neat technological designs with a few even appearing more akin to aliens, and as mentioned before, it’s hard to believe the game’s bosses fit into 8-bit design. While not the most outwardly colorful game, it never looks garish with its consistent dark science-fiction design.

In addition to looking grimly gorgeous, the music is some of the best ever created with the NES’s sound capabilities. Composed by Naoki Kodaka, the same musician behind many of Sunsoft’s other NES titles, it strikes the right balance between intense action and dramatic fervor, producing a memorable tone that isn’t quite like any other game on the NES, even compared to Sunsoft’s other releases. The real standout piece is the second-level music, a low-key tune that resonates with a hint of sorrow to create an oppressive atmosphere for the stage in question, which just so happens to be an underground bunker.

Journey to Silius has incredible production values, and the gameplay itself is pretty solid too, if nothing too groundbreaking at the time. It’s a tough game that feels rather imposing at times, but never completely impossible as one learns when to jump and what to shoot. The addition of new weapons for beating nearly every stage is also a cool mechanic, even if it’s not too different from how the Mega Man series rewards players for beating the bosses. While the game has a good amount of substance, the style is what really sets Journey to Silius above much of its ilk. It could even be said that the game looks and feels like an action movie, and such a sentiment would be closer to the truth than one would think. It’s a fact that this game was initially planned as Sunsoft’s adaptation of James Cameron’s classic 1984 sci-fi action thriller, The Terminator. While Sunsoft lost the licensing rights during development, the overall appearance to the game gives sufficient evidence to what it could have been as a movie tie-in. 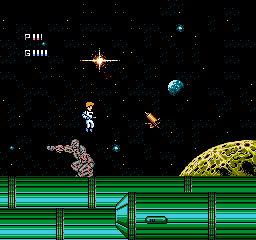 It’s not hard to imagine Jay as Kyle Reese fighting his war against the machines in the future, though perhaps his sprite could do with a bit more stubble to better resemble Michael Biehn. The first level is ripped right out of the scenes which depict the future with Terminators and Hunter-Killers having laid waste to all around them, and the second level is familiar to the underground bunkers where T-600s hunt down humans in hiding. While the third and fourth stages don’t really bear much parity to any known scene, the final level takes place in a factory akin to the setpiece for the showdown against the T-800. The biggest evidence is the final boss, a tall mechanical humanoid that bears a significant semblance to the T-800’s metal exoskeleton. Furthermore, an early set of screenshots in a Nintendo Power exclusive show what the game was going to be like, naturally with Arnold Schwarzenegger as the eponymous Terminator at the title screen. The other screens show the first level with the background clad in a hushed dark blue shade, which makes it appear even more grave than its final incarnation. 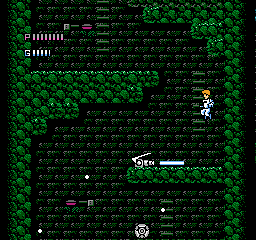 Journey to Silius had the potential to join up with Batman as one of the few NES games that would have defied the notion that all licensed games had to be crap. As it stands, even without the approval of the Hemdale Film Corporation, it’s nonetheless one of the best action games on the NES, standing head and shoulders above the games that actually received the Terminator license on the system. 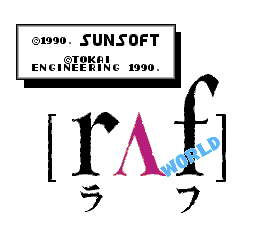 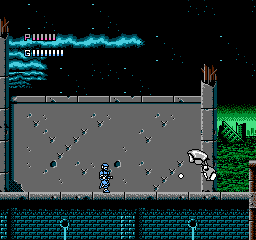 In Japan, it was given the bizarre title [rʌf] World, but with the exact same gameplay as its Western counterpart. The only notable difference besides the title screen is the sprite of the main character: Here the protagonist’s head is obscured by a helmet and his bodysuit looks slightly different. [rʌf] World was released in Japan in a PlayStation compilation titled Memorial Series: Sunsoft Vol. 5, which also featured Hebereke.

As for how The Terminator fared for games after Journey to Silius, two years later appeared an actual Terminator game developed by Radical Entertainment and published by Mindscape. Lamentably, its muddy graphics and infuriating controls dropped it into the typical licensed dreck cesspit where most tie-in games at the time were trapped. Perhaps it was an unwise move to revoke the license from Sunsoft in retrospect, but a slightly less embarrassing (albeit still terrible) title based on the then-recent T2: Judgment Day was developed by Software Creations and published by LJN. While that game at least had decent music, its level structure was awful and it was often horribly unfair. An actually okay game based on the first Terminator was released to the Genesis with a much expanded version for the Sega CD, and much later there were some genuinely good games in the franchise, even if not based on any specific film installment, like Terminator: Future Shock and Robocop vs. The Terminator. But when it comes to the NES, Journey to Silius is easily the best Terminator game on the platform without even the license.