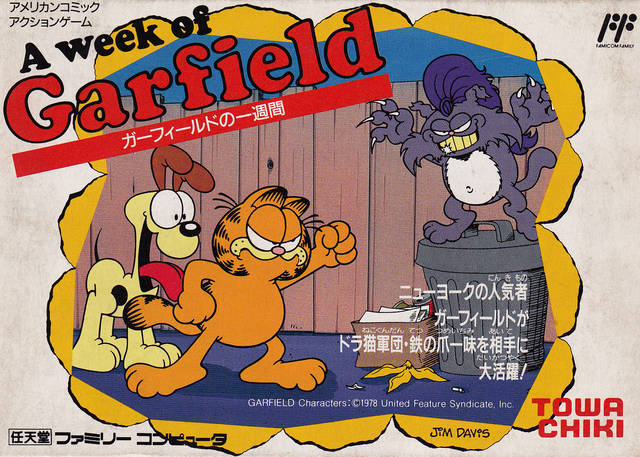 Licensed games have a reputation to be terrible, especially licensed Famicom games, and A Week of Garfield is no exception. It is one of those unusual cases where a game based on an American property – Jim Davis’ Garfield comic strip, of course – was not released in the territory where it originated from, leaving it a Japan-only release. There could have been licensing issues, but it’s easier to believe that anyone considering the game merely found it reprehensible. The game was developed by Mars Corp, and published by Towa Chiki. 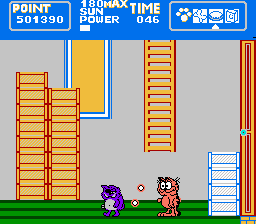 The goal of the game is to find Odie, as you play through a whole in-game week. Each day is a level (starting, appropriately, on Monday), although Saturday and Sunday are two levels each, making nine levels altogether. The levels consist of a variety of mundane indoor and outdoor environments. Each stage is further broken down into three sections, blocked off by a door. You need to find the hidden key in order to pass through, although since the game only scrolls forward, the key is always on the same screen and therefore the whole task is sorta pointless.

Like many subpar Famicom games, A Week of Garfield is primarily undone due to its hazy understanding of collision detection. Garfield can kick, but its range doesn’t appear to be any longer than the cat itself. Furthermore, there’s no kicking animation at all when you jump. Considering that the screen is always littered with enemies – birds, bugs, spiders and other random cat-unfriendly creatures – you spend a lot of time jumping and attacking, with only a sound effect confirming that you are, in fact, pressing a button. Therefore, most enemy encounters seem to be determined more by a random number generator than any sense of timing. It’s a dice roll the player is likely to be on the losing side of, especially considering Garfield’s incredibly short life bar, and lack of extra lives. (If you do manage to beat a level, at least you can continue from the start of the stage.) As such, for most people, Garfield’s adventures seldom last more than a minute or two, much less a week, which would absolutely qualify as some kind of not-entirely-legal punishment. 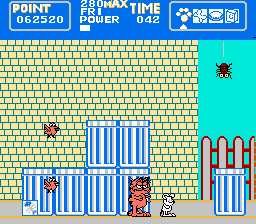 But, to its credit – the Garfield sprite is amusing. Not good, especially considering its shoddy animation, but amusing. Jump and he smiles straight at the player, ears adorably folded back. He can duck and crawl on all fours, like an actual cat. Hold Up and he gazes up at the sky with an enormous grin on his face. His death animation is a most hilarious faceplant. The boss enemies, of which there are only two, are also kinda funny in their weirdness, especially the evil, purple Garfield-esqe doppelganger.

Also, Jon talks to Garfield between stages. At first he just mutters things like “DID YOU FIND ODIE?” and other stuff which makes sense in context. But eventually his missing dog leads him to the verge of insanity, where he ponders things like “WHAT CAN I DO FOR YOU?, and “MAY I HELP YOU?” or “LET’S CHALLENGE”. Keep in mind that he does nothing, helps no one, and issues no challenges after these statements. The progressive mental breakdown of Jon is the other high point of A Week of Garfield, for what it’s worth. 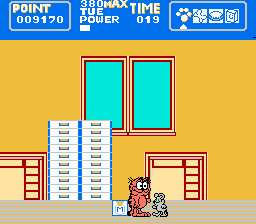