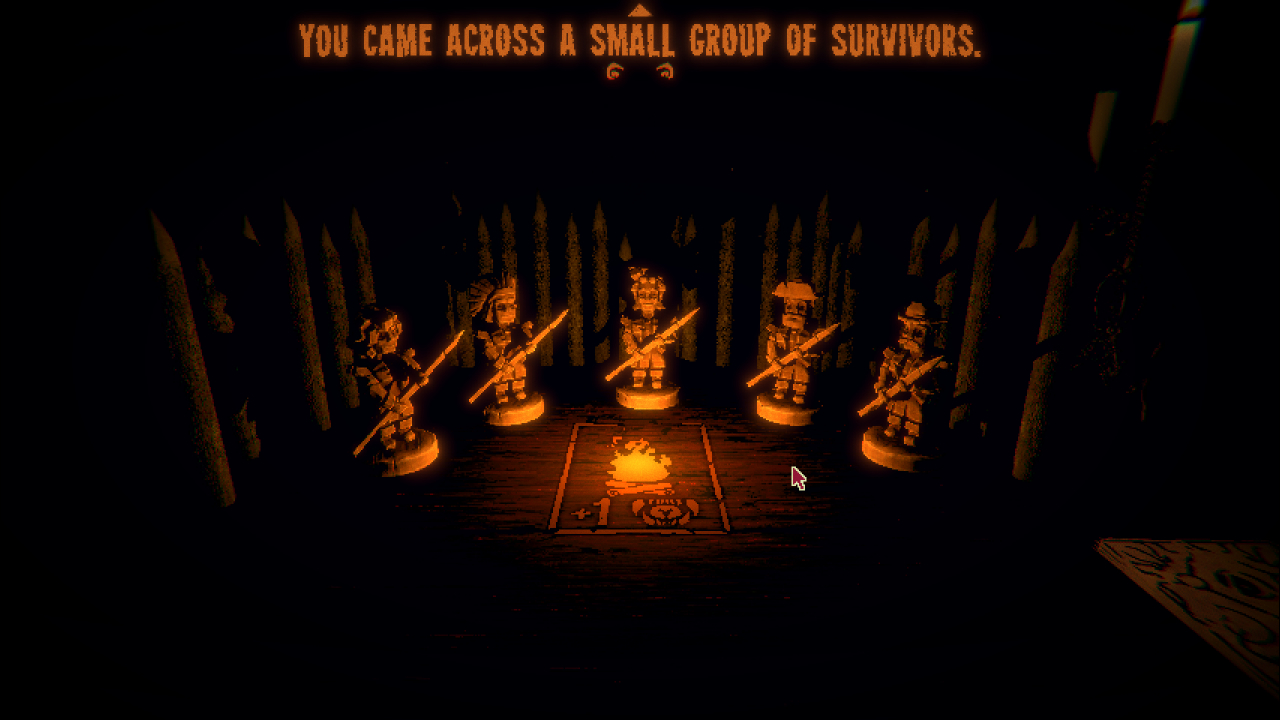 From the maker of Pony Island and The Hex comes Inscryption, a game both very much like Daniel Mullins’ past meta experiments, and somehow so much more. It fits into the wider universe he’s making, especially if you dig into the post-game ARG stuff, and has a lot of similar meta tricks, but it also picks a very different strategy than the previous games. Where Pony Island was a weird farce that had you breaking down the game itself and The Hex used meta elements for the sake of story telling and genre switching, Inscryption never deviates too far from its core gameplay or ideas. What makes it surprising is how it constantly reveals more and more layers. 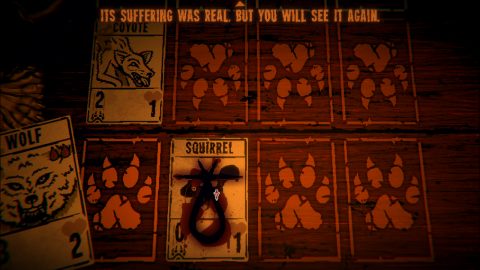 Inscryption started as a game jam project called Sacrifices Must Be Made, a horror themed card game where you’re at a table with a mysterious dealer and have to play against them. It tells a disturbing story through just implications and caught some attention in the indie scene, and acts as the design base for Inscryption. You start the game with a clearly real world person starting the game via some visual tricks and him talking over the game, and can then control things proper, something already up as you notice the new game option is dumbed out. You have to load up a game already in progress, not clear as to the why. It seems to be continuing where the game jam game left off, but now you’re playing the game as if it were a journey. You travel a map put on the table, encountering card battles and various events…and then the strange man (your game master) ask you to get up and get your player piece.

You can leave the table. You are in a cabin, but you can not leave it. You can interact with various doo-dads in the cabin, and even find items in them, or even extra cards to add to your deck. Some of your cards also start talking to you. They’re…victims? Whoever they are, they’re as trapped as you are by this bizarre stranger, and they seem to know a lot more than you do, but can’t exactly speak freely. They help you figure out the puzzles, how to find resources to help you, and offer advice in the game itself. You lose the game, you die, and the strange man makes a death card of you…and then you’re at the table. You are controlling another character in the game, playing the same role. You can find those death cards and use them yourself. This is how Inscryption plays, a constant new discovery leading to yet another, and if it feels like you hit a wall, a new oddity is eventually flashed in front of you in a random event, opening more strings to pull at. 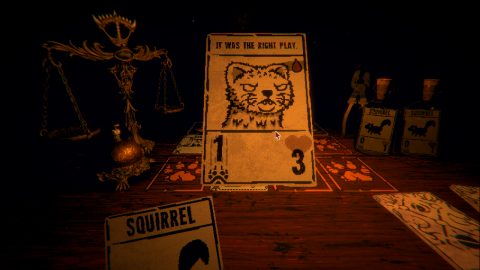 This is core to the game’s erupting narrative and structure, but what’s most surprising is that no matter how much the game changes (and it changes a lot), the core is still there. This is, ultimately, a card game told in the vein of a table top based adventure, a well designed roguelike that never keeps runs too long and keeps revealing new things in a long string of rewards and intrigue. That card game is also really fun and has quite a bit of depth you may not have expected from Mullins past focuses on gimmicks with simple gameplay formulas.

You have a small deck with your main monsters, and another filled with squirrels. You need to make sacrifices to summon monsters (how many based on the amount of blood drops on the card), so squirrels are summon fodder that can be played freely as long as you have one of your four spaces open (though any monster can also be sacrificed). As you go, more types are revealed, like bones, which you gain as your monsters die or are sacrificed, then can spend them to summon monsters that require them. 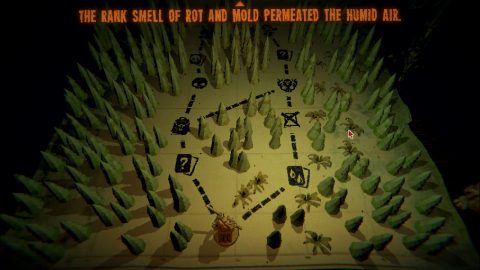 The balance here is that you can only draw one card per turn, either from your monster deck or the squirrel deck, so you have to decide what you need more. You can also gain one use items that give you bonuses or helpful abilities, like a free squirrel card or a fan that makes all your cards played fly for one turn, letting you attack the opponent directly. You can even get totems that give all of your monsters of a particular type a given sigil, granting a unique ability to all of them. The game is even shifted further in your favor by letting you see what cards the opponent is playing one turn ahead, which you will need to have any chance of winning, especially against bosses and their nasty surprises.

The goal is to damage the opponent enough to tip the scale in your favor. You two can keep damaging each other for a long period of time, what decides the win is who gets the scale to tip to a certain point by having a large enough ratio in your favor of gold teeth (the damage counter). Sometimes encounters can end early if you accept a surrender when the opponent sees no way to win, but you can also keep going to get extra gold teeth from doing extra damage in the last turn of hits. This lets you buy pelts in some map events, which you can use with another vendor in another event for rare cards, though pelts can also pop up in your deck and possibly throw RNG out of your favor. However, they can also act as blocks against monsters from damaging you…or become a problem if the enemy uses monsters that fly and can ignore blockers. Effects like these give the game its real depth. 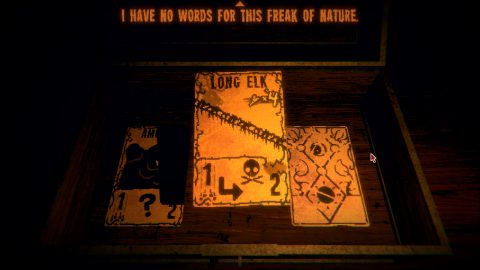 There’s a lot of variables to keep in mind, not to mention the very tricky boss battles, each having two phases. The prospector, for example, has a pack mule with a lot of health and a mess of cards to get if you defeat it, but putting too many monsters on the field in phase one may cause issues as phase two starts with all of your field being turned into slot hogging gold nuggets. Then, you have to wait for enemy monsters to break them and give you room to do your thing. All the battles have a trick like this you need to learn, so dying to them on first encounter is very much expected.

The base game is simple, but there’s tons of tricks and touches that make doing runs addictive in a way a lot of roguelikes struggle with. Runs are quick, and you’re finding new information, resources, and a better understanding of how to get past previous road blocks. The death card system can also let you make some ridiculously good cards as well, though RNG decides if they’ll spawn in certain events. It’s nowhere near as frustrating as a lot in the field, and takes a shorter amount of time to understand it – which is important due to the game’s heavy focus on story and twists. 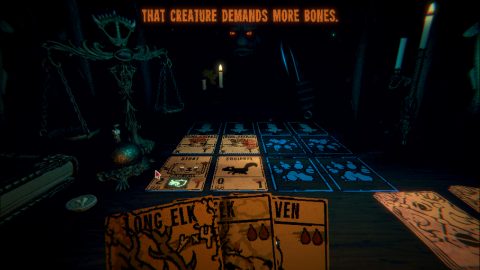 Inscryption is a far, far larger game than it initially seems, expanding on its core and ballooning into something unexpected and wildly entertaining. It works great as a game in itself, which you can’t entirely say about Mullins past work. Those games were made with their narratives in mind, using gameplay elements to serve that, while Inscryption is a great deal of fun even if it didn’t have so much narrative context. It’s a game that wants you to learn, and losing in it, while sometimes comes down to bad luck, often feels like your own fault, becoming a learning experience. If you die too often, the game is nice enough to nudge you into the right direction. It hits a balance of challenge and enjoyment rare for this overpopulated genre, and it’s not hard to see how Devolver got involved with this one after seeing what Mullins had made in the game jam release and seeing his larger plans. The game has personality, and it has the gameplay to back it up. Don’t sleep on it, and be prepared for the unexpected. 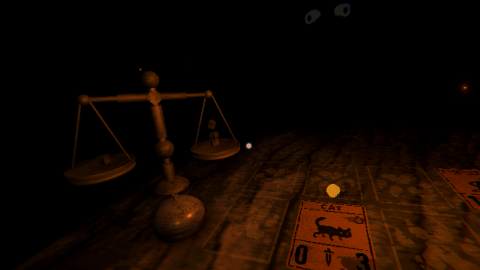