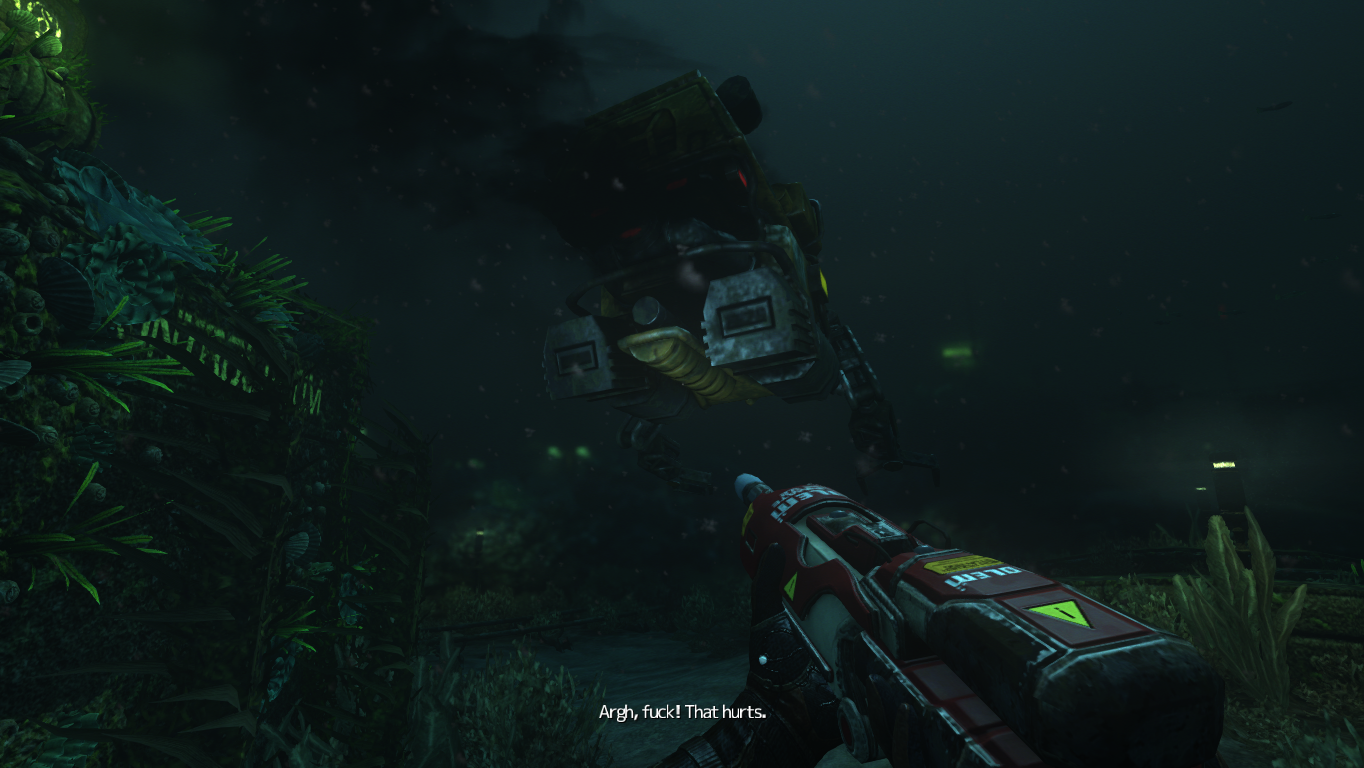 Warning: Soma is one of these games that are the more effective the less you know about them going in. This review is as low on spoilers as possible, but the best recommendation is to not read any further before playing the game. If you like bleak, immersive stealth survival horror with a sci-fi spin, then Soma will be for you.

With the Penumbra series and Amnesia: The Dark Descent, Frictional Games has been largely responsible for revitalizing the struggling survival horror genre in the 21st century. Not all of their influence has been positive – see Slender: The Eight Pages and its many clones – but it’s hardly Frictional who’s to be blamed for this. As cheap imitations of their ideas flooded the market in the five years after Amnesia, the Swedish developer worked diligently, taking its time with Soma in order to do everything right again.

After a rather quiet introduction, Soma drops you into ice cold water, almost literally: You wake up in a chair alone inside of a dark futuristic facility at the bottom of the sea, filled with creepy machines and a weird, cancerous biomechanical mass breaking through the walls everywhere. The only human souls you find appear to have been savagely butchered by the machines, but instead you encounter talking robots who think they are human. Like in Amnesia, you’re once again faced with the question of how you ended up in this place, and what on earth is going on with this world.

Cataclysms, contraptions, and a friend in need

The game also functions similarly to Frictional Games’ previous output, with an immersive first-person view devoid of any disruptive interface elements. You can grab and manipulate most items around, although their physical properties play a less pronounced role this time. While you get to smash a few windows with heavy objects, the key to your progress usually lies in operating or sabotaging the many machines that run the underwater stations. But the world of Soma is a world in ruins and nothing ever works properly, so you often find yourself searching the place for spare parts. Frictional Games has taken a realistic approach to problem solving, which makes things feel natural and believable, but it also means that most are straight forward and the solution usually presents itself or is explained to you. A few of the repair processes are presented as little logic puzzles, but there’s nothing too outrageous.

Unusual for a horror game as bleak as this, you’re not entirely alone in this world, but given a companion to support and guide you through the alien environment, the scientist Catherine Chun. She gives you a sense of direction, in a world that doesn’t seem to make any sense at all at first. But you only get to talk to her through special terminals, so in the dark, cold hallways you’re still all on your own when the monsters attack. 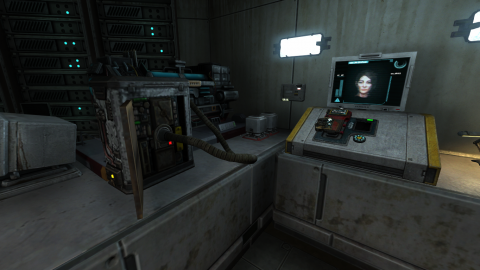 Catherine offers support, but this is usually all you see of her.

Terrors of the deep

As in Amnesia, you’re entirely helpless to the creatures of the deep, and it’s once again a terrifying game of hide-and-seek. Instead of ancient Lovecraftian horrors, your enemies are technological aberrations, but that doesn’t make them any less frightening. Fortunately Frictional Games came up with a variety of abominations this time, so you’re always surprised by new terrors throughout the game. The principle to deal with them always remains the same, but they behave very differently in often surprising and unintuitive ways. Some become aware of you when you only look at them, no matter how dark the corner you’re hiding in. Others are particularly sensitive to sound.

A specialty of the game is offering you a sense of safety only to take it away the next instant, or turn it into the very thing that will destroy you. You may, for example, want to close doors behind you in order to stay out of sight of your pursuers, but that only draws their attention towards your location at once. Try to climb a ladder to get away? Of course it will break, sending you falling down into the clutches of a killer robot.

But Soma still finds generosity within all its cruelty. Getting hit by a monster doesn’t kill you instantly, but you only get knocked out for a moment, providing another chance to escape the distracted attacker. The drawback is that your vision becomes unclear and you start dragging your feet with severe injuries. Only when you find odd mounts in the cancerous outgrows in the walls you get a chance to heal yourself, but doing so deprives that immediate area of electricity. 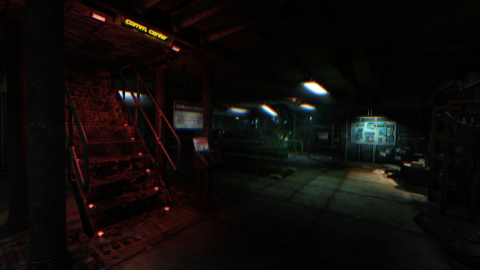 Everything looks fuzzy when you’re hurt.

That method of recovery may sound strange, but the plot provides a very good explanation for it. So much seems implausible at first but eventually everything falls into place, like your ability to tap into the sound buffer of communication devices. It provides a very satisfying feel of discovery and piecing together the things you’ve experienced throughout the game.

The underwater setting may sound reminiscent of Bioshock, but the atmosphere is much closer to System Shock, with its constant claustrophobic feel and technology itself as a major antagonist. But Soma reaches a level of bleakness neither of those games could convey. As per usual for this style of game, everyone is already dead when you reach them, and all that’s left of them to tell you their stories are their bodies, notes and buffered communications. Needless to say, it’s all a long parade of failure and misery.

I have a mouth, and I won’t shut up

What Soma does share with Bioshock is the storyteller’s urge to get the game’s ethical points across at any cost. The term “Soma” describes the cellular, the biological part of humanity, so it isn’t telling too much that the game is all about what role this part plays in the nature of human life. The dialog can often feel a bit heavy-handed due to the insistence on hitting every single philosophical dilemma associated with the issues related to the concepts of general artificial intelligence and digital preservation of human minds. There are also two or three plot points that are presented like the game would like them to be twists, but they’re so obviously telegraphed from a mile away they’ll hardly surprise anyone.

Another weakness of the storytelling is its indecisiveness about the personality of Simon Jarrett, the protagonist. Within instances, he can go from completely freaking out about the circumstances he finds himself in to a cold, problem-solving approach. In general, though, he is a stupid jerk, the kind of character you’d root for to die in a horror film. In a way it is consistent with the game’s message, but being forced into his skin becomes rather uncomfortable every time he opens his mouth to spout his thick-headed opinions. It’s even more grating considering that some of his subtler banter with Catherine is revolting against the doom and gloom of the world around them in a seriously heart-warming and touching way, despite the two never meeting in person for most of the game.

But what the game bungles concerning the “here and now” part of the narrative, it more than makes up with in sheer atmosphere of the surroundings. The narrow corridors in the derelict underwater stations are so oppressive it makes you understand what the characters of Das Boot must have felt when the submarine walls started crunching, communicating the immediate danger of getting crushed by what is supposed to keep you alive. At certain points you are forced to walk the submarine ground outside, where terrible sight and faint silhouettes mess with your sense of orientation.

Even though the places you explore were originally built as bastions of cold technology, they offer a convincing, moving glimpse into peoples’ tragic lives and the ways they chose to cope with their fates. On a whiteboard filled with mathematic formulae, people may have played hangman or tic-tac-toe in the corner. You may find one character’s sketchbook full of doodles, or another’s favorite toy.

The majority of time spent with Soma consists of such quiet moments, that make the horrid encounters with mindless monstrosities and the discovery of yet more mutilated corpses in between stand out all the more. It’s a superbly staged and paced experience, and the hardest part of the game secretly is the struggle within between the desire to break to get some relief from all that stress and the almost unbearable tension that urges you to carry on. 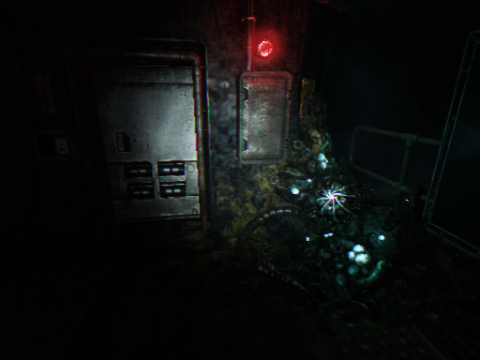 Even at tiny resolutions with minimum details the game is still very atmospheric.

A final note for PC players: For a game that’s ostensibly an “indie” title, Soma is rather taxing on the hardware. Owners of lower tier or older computers may be forced to scale down the effects. This is not uncommon for games of this type, but you may find yourself forced to switch to “medium” textures to avoid the game from stopping in its tracks every time you move to a new room, and this switch comes at a pretty high price: Many textures look almost as good as with the higher setting, but others are completely scaled down to something rather associated with PlayStation 2 era technology. This might be a glitch that’s going to be fixed in a patch or it might be just the way it is, but as of now the clash can be a bit distracting at times. Most of the screenshots here are taken with medium textures, so you can see the problem with some of the close-up objects when zooming in on the full size versions.