Bullet is a twin stick shooter offering by Sega, where there’s nothing to understand except you have a gun and there are tons of enemies rushing you every second. The game puts you in the armed shoes of Emmy and Fred (and Chris if you’re playing the three-player version), your standard run-and-gun commandos who bring to mind Ricky and Mary from Alien Syndrome. There’s no real rhyme or reason to the setting, but it seems that alien invaders are running rampant on the streets of a big city and you’re there to exterminate them. You start out with a gun of mediocre power that can be bolstered by finding these glowing ammunition bases which raise your energy gauge at the bottom of the screen. Raising your power level turns your shots from blue to yellow and increases the fire rate, and raising it further turns your bullets into orange spheres of considerable range and power. Should your power reach the maximum, your weapon becomes a pink stream of unending doom. 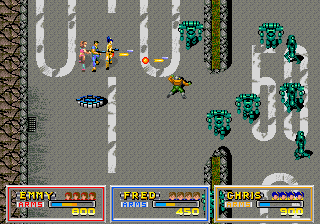 The fire rate is massively high and the shots actually penetrate enemies, so it appears as if you’re wielding a laser blade like combining fire and lightning in Gunstar Heroes. An interesting trick to the power-up stands is that you get more power from them if you stay on them for as long as they have energy. However, if you simply run over them, you only get a sliver of power and they run out of color anyway. It may be in your best interest to just keep moving if you’re mobbed by baddies, so each power-up base serves as a subtle risk-reward opportunity that may goad you into standing still for the couple of seconds needed to destroy your life, or it will give you just enough for the awesome pink sword laser.

There are six stages in all, starting from the streets of a ravaged cityscape. The rest of the game takes place underground, going through subways and sewers and abandoned passages until you reach the big boss. You fend off alien invaders and robots (and rats in the sewer) which continue to assault you until you reach the end, where you find the enemy commander sitting on his throne like a regal jerk. He attacks by somehow cloning himself and sending projections of his body out like ammo, and he’s also supported by several giant columns of energy which shoot fireballs, create electrical barriers, or roam around and try to crush you depending on the level you’re on. Interestingly enough, all normal enemies instantly disappear when you hit the commander but continue to flood in if you don’t damage him within a couple of seconds. It seems a bit lazy to fight the same boss at the end, but that’s really no more different than tackling Bowser at the end of each castle in Super Mario Bros. You do also fight a completely original final boss… if you manage to even make it to him. 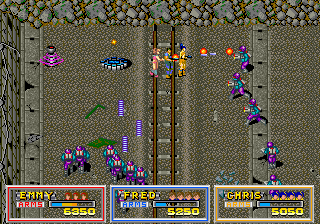 Perhaps the greatest fault to Bullet is that you only get one continue. Unlike other arcade games which encourage you to plug in more quarters to explore further, this game’s all like “nope you lose start over haha.” This perhaps balances out Bullet being slightly easier than your conventional Smash TV clone and giving you a super-powerful maximum weapon, but it’s not really a practical solution to a game that has a definite level structure and an actual ending. It can perhaps be feasible to beat this game in the single quarter the structure demands, but not everyone will be able to do so unless they bring a friend. Akin to Ikari Warriors, you can actually continue if there is at least one other friend still on the screen, but this all ends at the final level as Sega was so cruelly wont to enforce for most of their mid-to-later eighties arcade games.

Despite a counter-intuitive non-continue system, Bullet is quite an enjoyable and intense title. It’s a bit slower than a conventional twinstick blastfest, but it chucks a high flood of enemies at you with an average of twenty baddies on-screen at any given time. It isn’t really that much more inventive than Robotronor Smash TV or what have you, but it doesn’t pretend to be anything more than what it is. If you want a shooter that’s all guns and no filler, consider putting Bullet into your chamber of games to play.