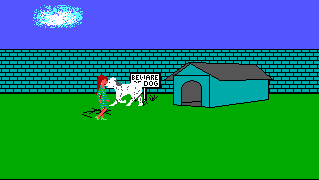 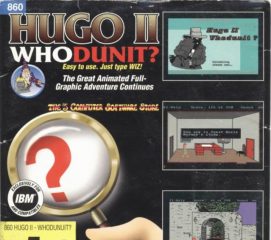 Hugo II starts shortly after the events of the first game, with Hugo and Penelope deciding to take a vacation in England to recuperate. They stop over at the mansion of Hugo’s uncle Horace, where Penelope quickly settles in for a nap and Hugo fetches a book to read. In the most expected of clichés for this game to pull, however, Hugo ends up triggering a secret passage and goes missing. Penelope wakes up just in time to witness Uncle Horace being murdered by an unknown assailant. So, as a slightly interesting twist, this time around you take control of Penelope. Kind of strange that it’s still Hugo’s name in the title, but it’s sort of like a “Legend of Zelda” situation, keeping it for name recognition. 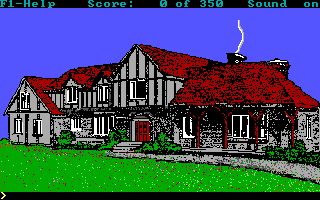 The engine is exactly the same as the original game, and the graphical and sound quality is unchanged. Some of the backgrounds are pictures digitized then recolored into EGA, and these tend to look a lot better than the backgrounds that were actually drawn. There’s a much bigger area to explore this time around, and not only do you have the mansion to deal with, but its nearby grounds, too. The fact that the game is so much longer means that starting over from a single mistake is even more of a hassle, so it’s even more important that you watch what you’re doing and make sure you keep a lot of saves. There are a lot of objects that don’t serve any particular use, but the police won’t come by to gather up the suspects until you manage to get enough stuff. 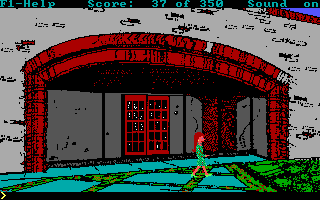 The thing that makes this game such an absolute pain to play are two scenes requiring very precise movement. Shortly into the game, you come across a field full of Venus flytraps, with a magnifying glass in the middle. What you’re supposed to do is maneuver around the plants to the other side of the field. The problem is that the collision detection is VERY sensitive, and you don’t even have to be touching the plants for the game to kill you. There’s another point where you need to cross a bridge over a river while carrying a box of matches. Touching the edges of the bridge will drop the matches into the river, making them useless. In both of these situations, the only possible way to get through them is by walking pixel by pixel and saving your game every single time you can take a step without dying. And that’s not even mentioning the hedge maze, where you have to wander around looking for four items with no kind of hint for navigation. 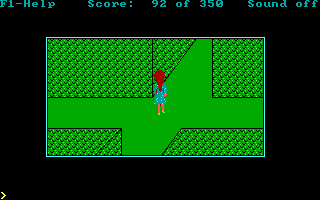 There’s also this one really strange scene where Penelope ends up on the surface of an alien planet through a phone booth, where she has to blow up a robot by shooting it. Then a man who calls himself “The Doctor” thanks her and offers her his “sonar screwdriver”. If you’re not familiar with British television, none of that sentence will probably make any sense to you at all. Even if you are, it’s a seriously jarring part in what was already a pretty weird series. 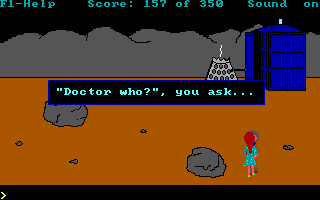 While the game advertises itself as a murder mystery, that doesn’t even actually come into play until about the last third, when the game starts throwing implications that various characters committed the murder at you. Eventually, you gather everyone (including a snake from earlier in the game, weirdly enough) and make your guess of who the murderer is. It turns out the correct answer is nobody at all, which the game really doesn’t give you any real justification. It turns out Uncle Horace and Cousin Harry were practicing for a play, and Hugo ended up locked in the laundry room. Of course, the game tells you this after Penelope has been nearly been stung, bitten, fallen, blown up, poisoned, and exterminated to death. Hilarious! 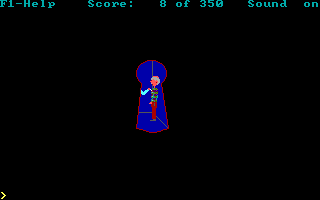 The sad thing is that in terms of personality and character Penelope is basically just Hugo in a dress, and her pea-green outfit doesn’t make her a whole lot easier to look at than he was. This time, though, at least there are more characters in the game that won’t try to kill you on sight. Some of them even have something almost like a personality, even if it’s just things like “The maid has a bad French accent” and “The gardener is always lusting after Penelope.” Penelope also comes across the old trivia man from the first game, although the fact she’s not as patient as Hugo means things go a little differently this time, in what’s undoubtedly the greatest moment in the entire series. 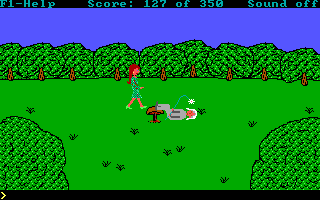 The length of the game compared to the other Hugo games, about 45 minutes or so, combined with all the unwinnable situations and the scenes requiring a quicksaves with every step, make this pretty much the worst game in the series. On the other hand, the writing’s much improved, so at least it’s worth playing through at least once for that.