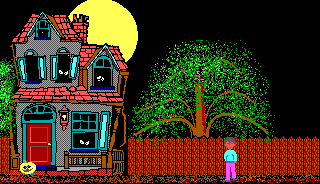 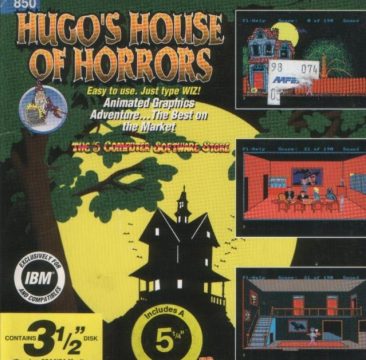 Back in the early ’90s, the concept of shareware on PCs was about just as popular as the concept of buying a game straight from the store shelves. While a couple of professional companies worked with this business model – the first part of a game was to be distributed for free, acting as a long demo and an incentive to purchase the remaining portions – many times they were done by a single guy working in his basement. He handled all the graphics, sounds, and coding himself , and it more than likely showed when you played the game. The Hugoseries, done by one British programmer named David P. Gray, is pretty much the perfect example of shareware before Apogee and Epic started making shareware a bit more professional.

Somewhere at a haunted mansion, a girl named Penelope heads over to babysit, but ends up being kidnapped for some unknown purpose by whoever lives inside. Hugo, her boyfriend, is the one who heads out to rescue her. That’s pretty much the only kind of backstory you get, and in a genre where story is one of the make-or-break factors, that’s seriously pathetic. The game basically plays out like the AGI King’s / Space / Police Quest games from the eighties. You control Hugo with the arrow keys, and type out actions into the parser to pull them off. The fact that the game doesn’t pause for commands means that you’ll sometimes need to have a command ready as soon as you enter a room to avoid getting killed by something. The parser, while simple, tends to work pretty well for the most part, although there might be a few times you’ll have to guess around for a verb. 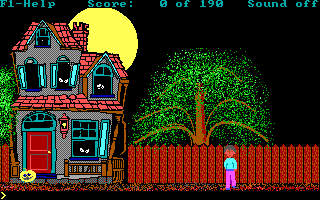 The first part of the game is about finding the items lying around the mansion for later on. A huge majority of the puzzles are about picking up things and using them on other things, and the few puzzles that aren’t inventory based tend to be even easier. At one point, you find a door locked with a combination lock. All you have to do to get past, however, is just enter the number you found conveniently written on the bathroom mirror. There’s one wasted opportunity where a mad scientist’s machine ends up transforming you into various things, and you can neither leave the room nor push the buttons to bring you back to normal. It’s too bad the solution ends up being as easy to telling the helpful Igor fellow to push buttons until you end up back to your regular self. 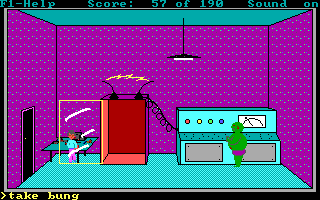 Eventually, you manage to uncover and open a trap door leading to a cave under the mansion. The trickiest part of the game is right here, when you find a room with a mummy and a bag of gold. The mummy’s way faster than you are, so you’re supposed to maneuver around the various rocks scattered about the room so that it gets stuck on one of them and can’t move. This is pretty much the only part of the game that requires any kind of precise movement, so you’re probably want to keep your finger hovering over the save button until you manage to make it out. 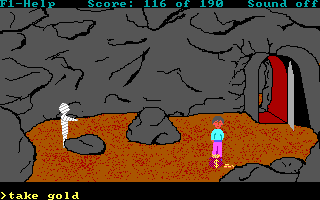 The penultimate puzzle is where you come across an old man blocking your passage across the lake. Out of all the things David Gray could have ended the game with, he decided to end it with answering trivia questions. They aren’t even questions about the game itself, either. Just be glad you’ve got GameFAQs by your side if you don’t happen to know off-hand what the name of Roy Rodger’s dog was, because there couldn’t have been any other purpose for this scene other than to get hint books sold. 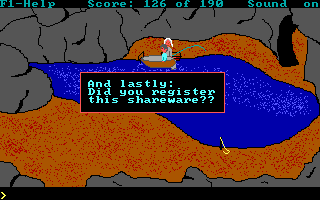 The graphics tend to be a bit of a mixed bag. The sprites are a little less blocky than the old Quest games, even though they tend to be even more pixellated. The biggest issue tends to be the outfit Hugo wears throughout the game: a sky blue sweater with purple pants. Even considering the sixteen color budget they were working with, it’s still really hard to think of why those colors were chosen, other than to not make Hugo blend in with the backgrounds, which tend to be pretty dark and muddy. The game doesn’t have any sound effects, but it does play a couple of songs through the PC speaker.

Even the writing tends to be sub-par. There are lots of grammar and spelling mistakes, and much of it usually ends up sounding really silly, like the game explaining that a “mystical force” keeps you from picking up a broom that’s actually part of the background. Most of the characters you meet are pretty much there to either kill you, give you items, or both. Hugo’s pretty much a blank slate with no dialogue, either. Even King Graham and Roger Wilco had some defining traits besides the fact they happened to have girlfriends. 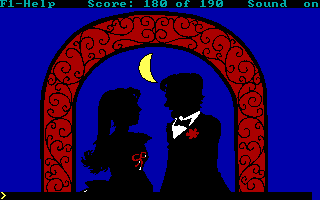 Overall, the game takes about ten to fifteen minutes if you know what you’re doing, and not much longer if you don’t. The biggest thing you have to worry about is making sure you don’t miss an item, because in classic Sierra fashion, missing anything means you’re pretty much stuck. Since the game’s so short, though, it doesn’t slow you down as much as it would in a full-length adventure. There’s quite a few ways to die, as you’d expect, some easy to see coming, and others more sudden. 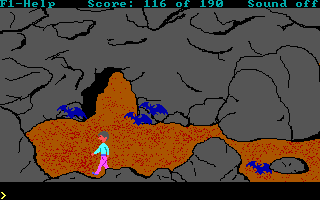 It’s not a completely terrible game, and it’s important to remember this was just one amateur programmer working on the game. On the other hand, it seriously pales compared to pretty much any adventure game from around the same period or by any professional company. The writing’s pretty boring, the puzzles are incredibly easy, and it subscribes completely to the worst aspects of old-school Sierra game design.

Hugo’s House of Horrors was classified as shareware, but the funny thing is that the version you actually bought didn’t have any difference aside from coming with a hint book, which is more or less useless now with the era of the internet. In 1995, three years after the original Hugo series ended, David Gray resold House of Horror and the other three games in the Hugo series for Windows. All four games are the exact same in terms graphics and gameplay, but now there’s a simple mouse-based interface to interact with the game with. It’s not as handy as the one in most Sierra games, but it’s useful if you can’t handle typing out every command. There’s also a MIDI soundtrack and digitized sound effects. There was also a version made in 2001 with the Adventure Game Studio engine, but it was removed from the internet after a cease and desist order from David Gray.