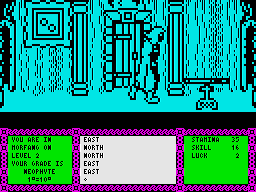 With their instantly recognizable style, the first three Gargoyle graphic adventure games each take a different approach to the same design elements. Heavy on the Magick, the team’s fourth and final graphic adventure, is probably the biggest departure from the formula, altering almost everything that characterized their earlier games.

For one, the story isn’t nearly as long-winded. Axil the Able, an apprentice sorcerer, is telling a large crowd a story about a foolish yet powerful elf named Master Therion. Unbeknownst to Axil, Therion is nearby and overhears the disparaging story. In a fit of rage, Therion flings the boastful apprentice to a faraway dungeon beneath the castle of Collodon’s Pile. Afterward, Axil finds the Net of Gugamon, a grimoire that contains various ancient incantations and spells. The focus of the book, and thus for most of the game, is invoking various demons in order to accomplish various tasks. With his new magical tool, Axil has to escape the dungeon.

The first noticeable alteration from previous games is the blocky graphics. Noted as looking rather awkward even upon release, there’s a practical coding reason for it. As mentioned before, Dun Darach was planned to be a much larger adventure, but the Spetrum’s memory limits forced the developers to scale down the world to fit in the intricate animations. With Heavy on the Magick, in order to retain 255 distinct rooms and animate all 21 of the game’s monsters with the Spectrum’s 48K memory, Roy and Greg enlarged the individual graphic cells to create the game’s sprites, reducing the resolution while also compressing the graphics enough to save memory. It certainly looks odd, but it finally allowed Gargoyle to create their ideal massive game world.

Although the main character is fully animated, no side-scrolling movement or camera angle manipulation is required on part of the player. A simple text parser similar to the early Sierra adventures is located on the bottom of the screen. In Crash magazine’s preview, Greg claimed that Magick had a more expansive parser than most adventure games, but the game keeps things very, very simple. Typing in abbreviated cardinal directions moves the player between rooms. A handful of verb-nouns are usable, with the verb input based on a single shortcut key. X examines, I invokes, and so on. Gargoyle called this parser style the Merphish dialect, a rather silly idea considering the verb-noun form was still the standard for most graphic adventure titles.

Thankfully, the game manages to avoid many of the frustrations related to text adventure navigation. In addition to being visible on the screen, all passages are marked on a small mini-map on the bottom left corner. The mini-map can be toggled to display a short description of the room, which is never really detailed. One of the nicer touches is how the game doesn’t bark “can’t go north” if the player inputs movement to a blocked direction. If a wall is blocked, Axil will stumble blindly into the wall and shrug at the player, humorously breaking the fourth wall.

While the parser remains simple, completing the game isn’t. With four hundred items available and limited inventory space, there are more possible solutions than ever before. Although there are more items, the game moves beyond the simple inventory slog approach in several ways. Now, Axil has a variety of verbal powers, allowing him to talk directly to objects and tell them what to do. Doors in particular will often require a keyword to open, requiring Axil to scrounge the world for clues.

Gargoyle built in a trusty partner for Axil to counter some of the trickier puzzles. After invoking Apex the friendly ogre, Axil can ask him various questions about what to do next. Despite the initial difficulties in determining what Apex will respond to, it quickly becomes clear that he will give clues to particular environmental puzzles. In some ways, this addition makes the answers slightly more obvious than before, but Apex only helps with discrete puzzles and in no way breaks the game.

In addition to altering the adventure approach, light RPG elements have also been added. Axil’s stamina, skill, and luck are randomly generated at the start of each playthrough. These determine how easily you can survive combat. It’s best to look at the opponent’s stamina and skill levels display, as any stat higher than Axil’s will undoubtedly lead to his death. Stamina is decreased naturally through fighting, completing tasks, and casting spells, making it Axil’s hit points, action points, and magic points rolled into one. Although stamina can be rejuvenated with food and potions, these items can also be poisoned, causing even more damage. By winning fights and progressing through puzzles, Axil gains experience and advances in magical grade, a character level shown on the options screen. Higher levels mean access to more abilities that are necessary to complete the game.

Axil’s spells are initially limited. Real-time combat plays out simply by typing B for blast followed by the enemy’s name over and over again. Although foes will usually get a few hits in, simply making sure your skill and luck are higher than your opponents will guarantee victory. It’s still pretty shallow, but it’s much more complex than Marpsort and Tir Na Nog.

Axil eventually gains the ability to invoke one of four helpful demons. Before calling upon these monsters, Axil will need a key item such as a sword or ruby, some of which can only be accessed at higher levels. Astarot teleports Axil around the dungeon, Magot reveals the location of key items, Asmodee destroys any object you ask of him, and Belezbar tells if an object is dangerous to Axil. Overall, these demons give the player unlimited ways to approach the game’s solution, giving the game much more replay value.

As with previous Gargoyle titles, Heavy on the Magick was universally acclaimed upon release. Readers of Crash magazine voted it Adventure Game of the Year and it was a runner-up in the Golden Joystick Awards. Some reviewers noted the strange blown-up graphics, but general consensus was that the game was one of the best the Spectrum had to offer. Mandatory reissues followed, although fewer than the other games: it reappeared on Rebound’s compilation Gargoyle Classics in 1989 and the cover tape of Your Sinclair 69. Magick was also a “Flippy-Flippy” release, meaning that the Spectrum and Amstrad versions of the game were each on one side of the cassette.

Much like the planned Siege of Earth trilogy, Magick was to be followed up with a variety of sequels and expansions. This was intended to give the game a module-based Dungeons & Dragons atmosphere. Two modules were announced in February of 1987 with a planned Summer release: the Trials of Therion and the Tombs of Taro. The graphical layout was to be altered so that six rooms were visible at one time, players could import stats from their original game, and a possible two player options was also in the works. Only two months after announcing these plans, Greg stated that the modules were delayed indefinitely.

In 2011, UK programmer Spraydough came up with a fun demo for a remake of the game. The core elements are retained and it has nice enough presentation for a small one-man project, but he totally abandoned it almost immediately after he made it to focus his efforts on programming for Android phones. Currently, the player can walk between rooms and accomplish simple goals like picking up items. His site offers the demo and source code in case anyone ever feels like finishing the game.