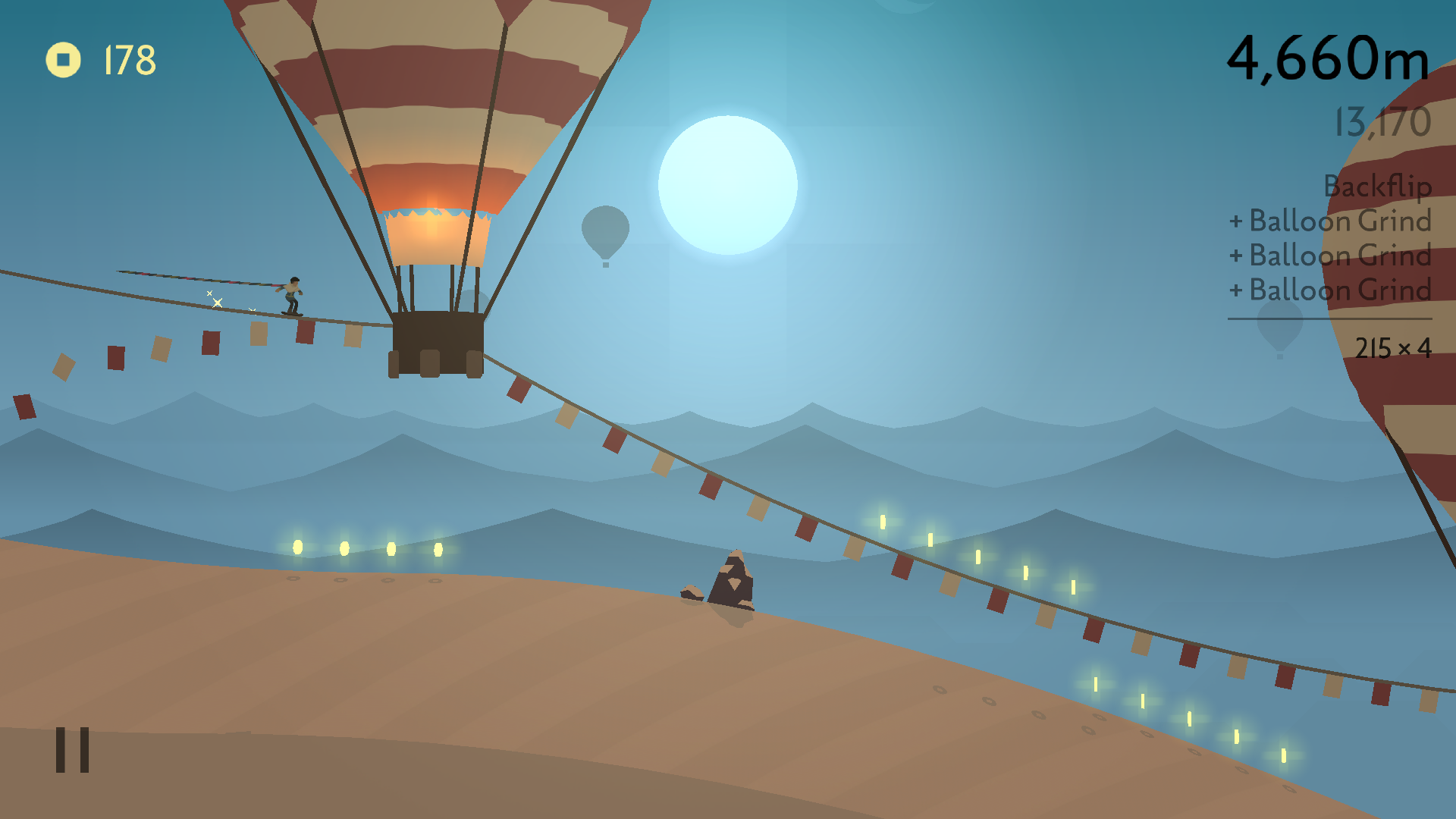 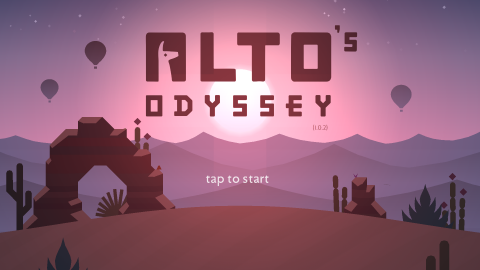 Making a sequel to a successful endless runner is always going to be difficult, since you want to maintain what the original did well without boring your audience with a repeated formula or alienating them with radical changes. In the case of Alto’s Odyssey, the developers opted to keep the acclaimed gameplay from Alto’s Adventure while offering new obstacles and creating a more varied, difficult game that’ll appeal to fans itching for a challenge, although it also has an unfortunate issue with microtransactions in the Android version.

Alto and his friends are searching for new thrills, and head to the desert to sandboard their way to new adventures and horizons. Odyssey retains the same gameplay as its predecessor, but makes a few changes and additions to the formula. The hover feather power-up has been swapped out for a small shield that breaks through rocks if you don’t have enough momentum and lands your backflips as soon as you touch the ground, though usually without the points if you didn’t complete it. This works a lot better at its intended function, and flows more smoothly into the mechanics.

Since you’re in the desert, you’ll be occasionally swamped by sandstorms that makes things harder to see for a short time. The mountain elder has been swapped out for a lemur, who is so persistent in chasing you that they’ll even jump onto rails if they can, forcing you to think more on your feet to ensure you don’t get caught. Both of these already set Odyssey up to be a tougher sequel, but what clinches it is the addition of three biomes, with each one featuring unique obstacles. 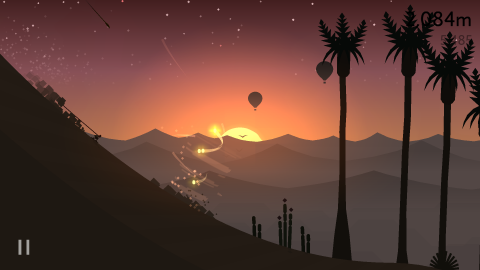 There’s the desert, where you’ll encounter tornados that shoot you into the sky, hot air balloons linked by flag streamers, and massive dunes. Then there’s the canyons, which feature enormous gaps and high walls that you can wallride on if you’ve bought the sandboard from the in-game shop after unlocking it. Lastly are the abandoned temples, which are full of waterfalls you can skim down, ruins, and old vines that break after grinding on them for a short time. You’ll occasionally change between any of these biomes during your session, encouraging you to think on your feet as you’re given various combinations of obstacles to deal with.

For the most part, they add challenges that flow naturally into the mechanics and into each other without overcomplicating anything. Sadly, that can’t be said for the wallriding. You need to hold the screen when you’re wallriding and let go to jump off, which feels at odds with the rest of the controls and can often kill a good run cheaply. You can eventually find a rhythm to it, but there’s an awkwardness to it that’s hard to overcome.

The goal and levelling system is back and hasn’t been changed, which means you still need a lot of luck to pull off certain goals or combos, or be forced to grind for coins to skip a goal that’s too difficult. The latter is especially frustrating when more of the game’s later goals become unreasonably demanding in requiring very specific things from the level design and your luck. 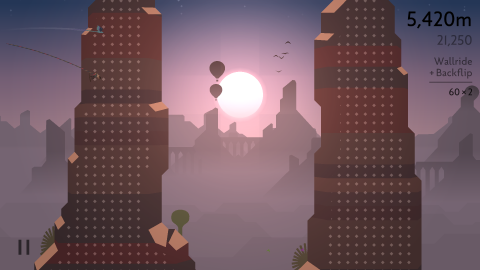 Like with the first game, the Android version is free but comes with an in-game shop where you can purchase coins with real money, and there’s a lot more on offer to encourage you pay for coins. Upgrades to power-ups, a compass that lets you change to a select biome (which you have to pay for each time!), other items that the game asks you to get to complete goals, and even an option to remove most(!) of the video ads. While these can arguably be ignored, this is by far the worst aspect of the game and shouldn’t have been given more emphasis, since it’s psychologically unfair to players who are unlucky, impatient or compulsive.

It’s especially frustrating when the game itself is otherwise as good as it’s always been. The inputs are simple enough for anyone to use, but the mechanics have plenty of depth to ensure that playing it never gets boring. The variety of characters offered give you many playstyles to work from, power-ups act as safety nets but never need to be used as crutches, and it manages to provide a fair challenge through its solid gameplay and level design. This also goes for the great presentation.

The graphics still retain their striking art style and focus on clarity, but see a major improvement in their use of color. With the variety of locations combined with a more prominent day/night cycle and weather system, levels can be bathed in all kinds of stunning color schemes that the previous game never approached. Perhaps the only issue is that certain graphical effects such as the rising sun can occasionally bug out, with its edges randomly flickering in the sky whenever you crash through rocks. 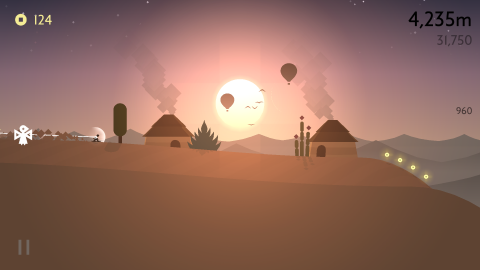 Like before, the sound design is fantastic with its collection of satisfying sound effects and atmospheric ambience helping to convey the sense of a living, breathing world. The soundtrack by Todd Baker and Torin Borrowdale does a good job at fitting the mood of each of their modes and even use woodwinds to help convey the different setting, but their music can occasionally be a bit repetitive and distract somewhat from the sound design.

Alto’s Odyssey is a solid example of a sequel that provides more of the same while adding an extra level of challenge on top of that, and it works because the core gameplay is so good. However, the added emphasis of microtransactions in the Android version is troubling enough that people might be better off getting it on iOS or consoles.

Alto’s Odyssey received an update in July 2021 when it was released for the Apple Arcade service on iOS and tvOS devices, known as Alto’s Odyssey: The Lost City. This version adds a fourth biome where you stumble across a city hidden deep underground, something which was originally planned for inclusion in the game before being dropped and subsequently resurrected for this version. Various new goals are introduced specifically to this area, and it even features a new piece of music courtesy of the game’s co-composer Todd Baker. As of writing this, there are currently no plans to update the other versions with The Lost City, but that will hopefully change in the future to let all players experience what is perhaps the definitive take on Alto’s Odyssey.