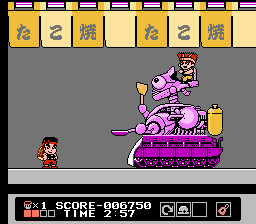 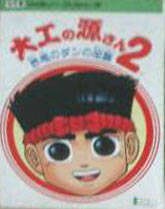 This Famicom-only Gen-san sequel, whose subtitle translates to “Red-Headed Dan’s Counterattack”, doesn’t really add much to the mix – it’s essentially just like the first game with new levels, except the scrolling is actually choppier. You fight through the usual construction scenery, before adventuring to an underwater fortress and eventually through a jungle. The last few levels consist of a few fairly boring side scrolling shooter segments, with Gen riding in a flying hammer (?!). Nearly all of the boss battles are against one particular rival – this red haired fellow named Dan mentioned in the subtitle – who rides on different vehicles and usually attacks with dynamite. One of the only other notable fights is when you’re paired off against a rather demented looking robot, and need to use your ground smash to knock him back into the press, which pounds him into the ground. Otherwise, it’s a fairly simplistic and rather average game. 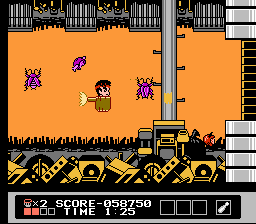