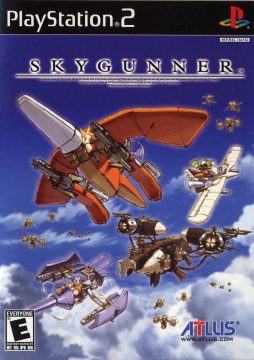 SkyGunner is a cutesy dogfighting action game published in the early days of the PlayStation 2, developed by PixelArts, a mysterious little studio which doesn’t seem to have made much else.  Deserved praise must go to Atlus though for producing one of the finest localizations in the company’s history, since SkyGunner was impeccably and lovingly brought over. 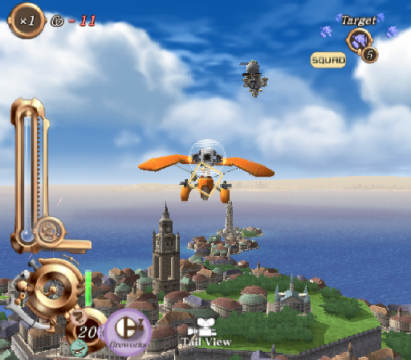 The game plays like a freeform arcade 3D shooter, like Panzer Dragoon but not on rails, or the freeform stages in Starfox 64. Controls can be configured to preference. As you fly around you can lock on to enemies and shoot them down using basic machine guns or a selection of optional weapons: dog missiles to paralyze enemies; Fireworks Missiles for big explosions; Cross Missiles which can be stacked and detonated for massive damage; Pumpkin Bombs for bomb runs; Bat Missiles for homing.

There are three main story characters, each representing a different difficulty level, with two bonus characters to unlock who have their own unique side-story missions. What’s excellent about the selectable characters is not only does each handle dramatically differently, with distinct special moves and access to only certain optional weapons, but they have different story arcs which can take them to different locations. Even when characters share a specific stage (such as the opening and final level), their objectives are entirely different. For example in the final stage each character has to focus on a specific goal to take down the enemy, whether its damaging the main ship or distracting a particularly large enemy. This not only encourages replaying, but it guarantees that each playthrough is entirely different. There are also Time Attack and Survival modes to unlock in addition to extra characters. 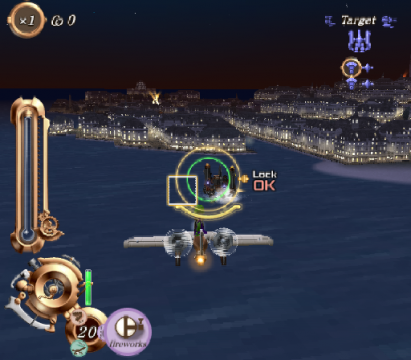 The story centers around three Skygunners in the quaint town of Rive, which is having an exposition to celebrate completion of a new, specialised engine. The local police ask them to assist with guarding the exposition from thieves who might want to steal the engine. The engine is housed aboard the floating luxury liner and museum, the Merveilleux. Of course, as expected, things go awry. 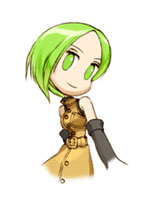 A new Skygunner who’s come from the industrial town of Neju to guard the museum. She is going to help Ciel and Copain stop the conniving Ventre. A good character to start with, her story arc is considered the Easy option. Her name means “woman” in French, and her plane is the Branche, which means “hip person”. 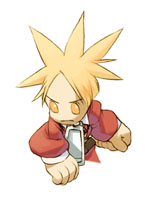 A famous Gunner, well known in Rieve and the neighbouring towns. He has completed many missions with his pal, Copain. The Medium difficulty option. His name means “sky”, and his plane is the Avenir, which means “future”. 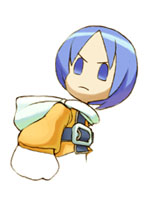 His skills rival those of his friend, Ciel. This rambunctious fellow is full of spirit and represents the Hard difficulty option. Needs to be unlocked by completing the game first. His name means “friend”, and his plane the Chevalier means “knight”. 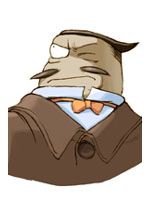 This is the tough-as-nails captain of the Rive Police Station. He is in charge of the security of the museum. He has a good relationship with the Skygunners in town and has asked for their help to guard the museum. He can be unlocked as a playable character, though isn’t involved with the main story mission – he gets his own bonus side mission. Rather than special moves he flies with his police force who can be ordered around while in the air. His name means “audacious”, and his plane’s name is Courage. 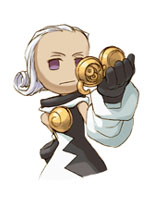 A rather mysterious man. Not much is known about his true motivations, but it seems like he is taking part in Ventre’s plan to steal the Eternal Engine. Can be unlocked as a playable character for a special bonus mission – his plane is fast and powerful. His plane is the Fantome. 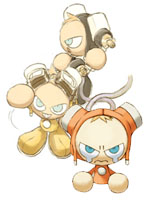 They enjoy taking part in Ventre’s plan as it affords them the opportunity to play and be reckless. Note their adorable little parachute animation after shooting them down. Their name means “baby chickens” in French. 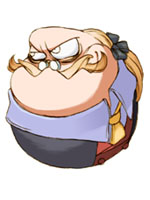 The criminal genius who has stolen many treasures through his daring operations. He has arrived in the town of Rive to steal the Eternal Engine that will be on display at the exposition. it is an engine of perpetual motion without the need for an outside power source. His name means “belly”.

What makes SkyGunner so deliciously fantastic, is regardless of what kind of player you are there’s something here for you. 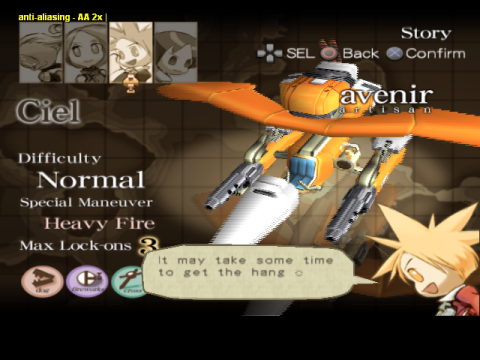 If you play games on an easy setting for story and setting, then it’s a light-hearted, blithe adventure in a gorgeously detailed faux-French / faux-Victorian world, with charming writing and truly excellent English voice acting (the Japanese voice track is also available). Everything has a gentle watercolor style to it and an atmosphere of such whimsy that it’s almost a shame it’s a video game, and not a series of delightful books or even a film. There’s a rousing Japanese intro song, with Romanized lyrics in the manual, plus a series of sepia photographs and artwork you can unlock through encountering special events (get shot down for example and you’re treated to a photo of Ventre viewing the scene from his cabin). It’s also full of small details, for example when you stop firing your machine guns the plane discharges all the spent shells. There’s more charm in 10 minutes of SkyGunner than some development studios manage in an entire career. 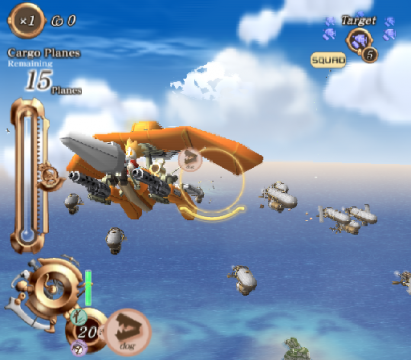 Hayao Miyazaki is an often quoted “source of inspiration” by lazy writers unable to think of other comparisons, but there’s no real escaping it here – the sense of joy as you battle gigantic airships and skim down narrow water canals makes it so appropriate for SkyGunner. This is Miyazaki in video game form, particularly emulating the feel of Porco Rosso.

Alternatively, if you’re a hardened shoot-em-up or fighter veteran, who practices score chaining in Cave shooters or the perfect combo in Virtua Fighter, then SkyGunner will also appeal. Although the game can be enjoyed casually, with little attention paid to its mechanics, under the hood is a system designed specifically for the technically proficient score-obsessed player. It is hardcore nirvana, if you want it to be. 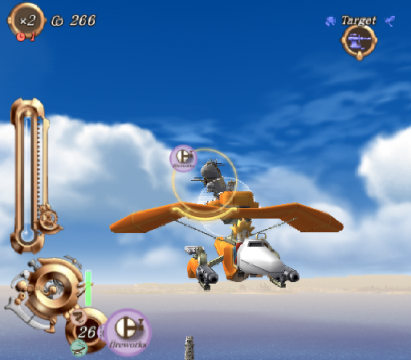 The aim of each level is to rack up Prize Money, and lots of it. Prize Money is earned by destroying enemies, and destroying a group at the same time yields a Hit Bonus multiplier eg: (five guys = x5 for each kill). Additionally, destroying one enemy adjacent to other enemies will result in an explosion and Chain Bonus, with a 5-chain kill resulting in a x16 multiplier. This is a great way to rack up major points, and all the levels are expertly designed around the concept of chaining. Most enemies are too tough to take down with a single hit though, so you need to fly around, weakening the chain, before detonating the guy at the end to set them all off. Patience is key here, since rather than killing everything in sight it’s worth first weakening adjacent foes. 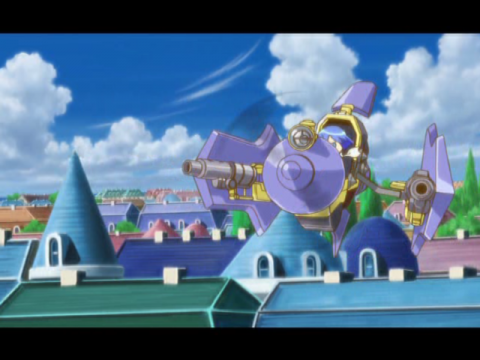 In addition to the above is a Bonus Count, or score multiplier which affects all gained Prize Money and increases as you take down enemies – of course it’s constantly decreasing, so once you’ve got say a x6 multiplier you need to hunt down little enemies to keep it topped up. This is where the slowdown is essential, because setting off massive firework explosions slows everything, allowing you to precisely fire at and weaken chains of enemies, or pick off little guys on the horizon. The slowdown mechanic needs to be understood and worked with in order to maximize score chains, and it can only be assumed that the Western print press at the time didn’t realize this. If it really bugs you, disable it and play casually. 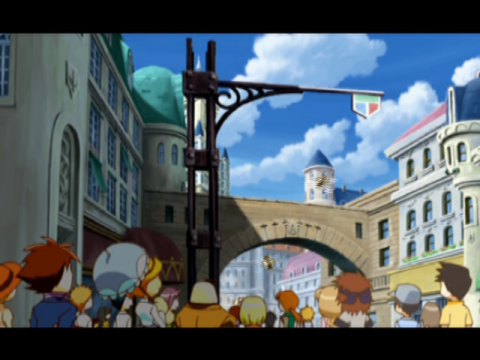 Of course while you’re racking up big Prize Money, various actions will cause it to decrease: firing your machine guns, taking damage from enemies or crashing your craft will cause you to hemorrhage precious points. Additionally at the stage’s end you will receive a bonus for completing any special events and also unused special weapons – so it pays to fire carefully. Blasting willy-nilly is guaranteed to give you a low rank. There’s a great sense of tension as every action will potentially decrease your score, but if played right could massively boost your multiplier.

If this seems too intense, and ranking can get very intense, then you can ignore all of the above and just play it for fun. That’s why SkyGunner is so great, it manages to play to both the casual and hardcore side; an unprecedented artistic experience, with a lot of depth for those who want it. 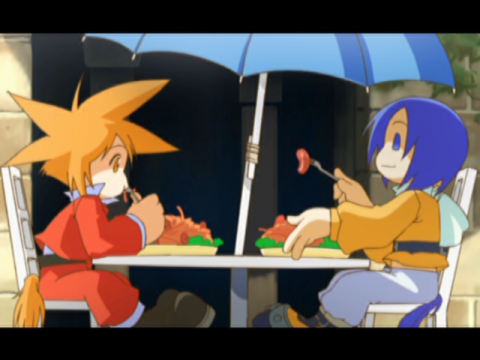 The only other fault besides the slowdown (which can be disabled via a secret menu, added to the US localization), and again this too is optional, is the default controller settings. Immediately set your controls to Novice. This will take care of auto-levelling your plane and will offer a much more natural style of arcade-like control. Although the Expert setting claims to offer a greater degree of control, with things like buttons for left and right yaw, all it actually does is distract you from the task of score-chaining, and has little to no benefit. By all means try it if you’re curious, but sticking with Novice will make finding and targeting enemies much easier, in addition to controlling your plane with utmost precision. SkyGunner is best enjoyed as an arcade-style 3D shooter, not a realistic flight-sim.

Another injustice is the fact that SkyGunner was not a chart topping, blockbusting success, later heralded as a crowning gem in the PS2’s library. It was criminally overlooked, will never see a sequel or re-release, and yet is one of the finest creations from the last generation. Play for score, or play for the fanciful atmosphere and drink in its unique world, just play it. 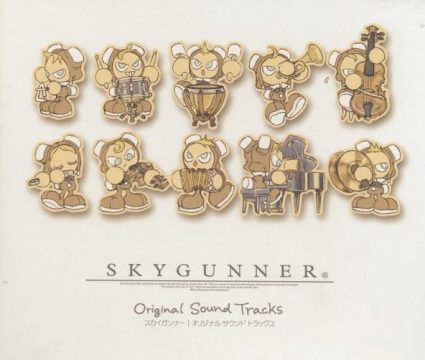 The soundtrack is as exquisite as the visuals and gameplay, and luckily there was an official OST release if you’re keen. There was also an official guidebook released in Japan, which features additional nice artwork. At some you could also get a SkyGunner-themed calendar, but since then all official online sources have closed and the only evidence are tiny Google thumbnail caches.

In 2005, EasyGameStation (who would later go on to develop Chantelise and Recettear) created Gunners Heart, an unofficial doujin game featuring the same characters and taking place in the same world. It’s a much more straightforward game, strictly a rail shooter compared to the open arena combat of SkyGunner, but it’s cute and plenty of fun. It’s available for download at Gamersgate. 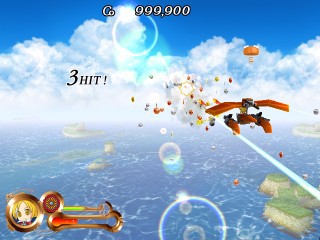