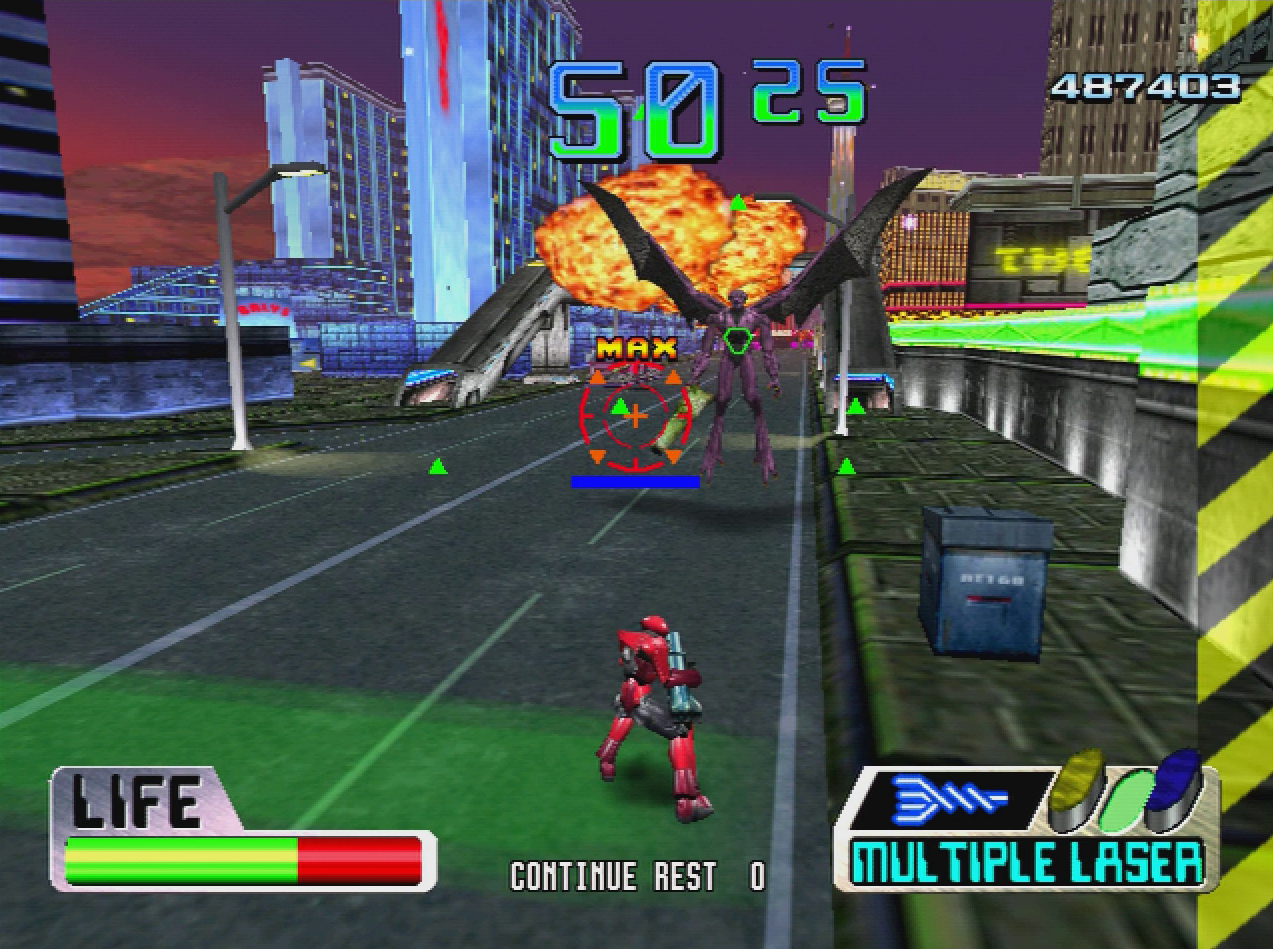 Sega’s Dreamcast became known as a haven for top-notch, highly replayable arcade ports, and Charge ‘N Blast takes so many cues from the arcades that it’s easy to lump it in with them. In actuality, it was developed exclusively for the Dreamcast in 2000 and was brought overseas in 2001, with nary an arcade version in sight. Critics weren’t kind to the game, citing its short length, lack of originality, and repetitive nature as deal-breaking issues. While Charge ‘N Blast is undeniably brief, its tight mechanics and no-nonsense action give it a specific appeal when juxtaposed to the increasingly massive and cinematic games of the modern era.

Developed by SIMS, which was part of a joint venture between Sega and Sanritsu Denki (a contractor responsible for several of Sega’s home conversions in the late 80s and early 90s) at the time, it’s easy to see the influences of Sega AM1 and AM2’s works in Charge ‘N Blast. Slick, colorful art design permeates every inch of the game, evoking the famous “Sega-blue skies” aesthetic, multiple playthroughs are encouraged in the pursuit of mastery, and like The House of the Dead, every character delivers poorly acted lines that are endearingly cheesy. Don’t come in expecting much of a story though – let’s just say the game’s title perfectly summarizes what you’ll be doing. 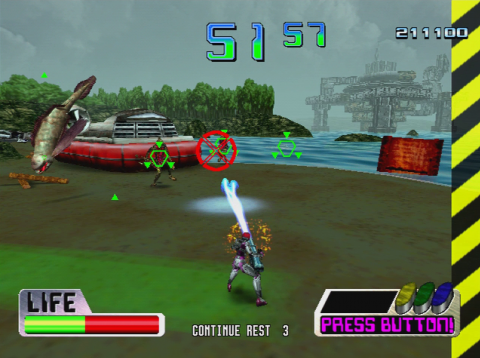 Rather than going with the light gun approach Sega was so fond of, SIMS opted for the shooting gallery approach instead, resembling the likes of Wild Guns and Sin and Punishment. As one of three playable characters (with more unlockable), you’re tasked with shooting everything in your path while dodging incoming fire as you move from encounter to encounter. You can only move left or right and you won’t advance to the next part of the mission until everything is dead, so you’ll need both accurate aim and the foresight to predict and dodge enemy attacks. Each character is armed with three different weapons meant for different situations, one of which is unique to each character. The “Single Rocket” is a competent if unimpressive general purpose weapon and the “Lock-On Torpedo” is intended for use exclusively during underwater combat. This means that your choice in character will ultimately come down to which unique weapon you prefer.

Johnny Rock (John Dawn in the Japanese version) comes with the “Multiple Rocket”, a much improved version of the “Single Rocket” that can lock onto multiple targets at once. Pamela Hewitt gets the “Multiple Laser”, which fires faster than the rockets and can easily tear through bosses. Nicholas Woods is both blessed and burdened with the “Grenade”, a weapon that’s capable of tremendous destruction but is completely worthless against anything distant due to its limited range. These unique weapons give each character some much needed identity, but they do make the game unbalanced as well – Pamela will have no trouble shredding her way through the game, whereas Nicholas will struggle greatly against the bosses of mission two and five since they’re well out of his grenade’s range, forcing him to rely on his other weapons. The unlockable characters have unique weapons of their own too, with Lisa Matsushita’s “Hyper Laser” being powerful enough to practically turn the game into a joke. 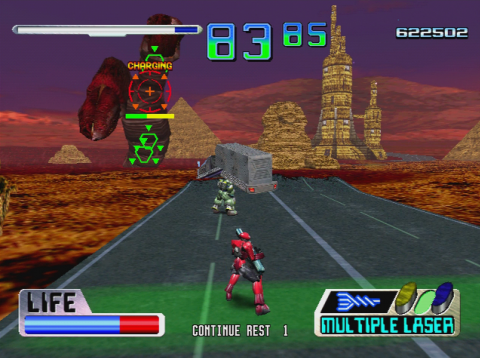 Charge ‘N Blast’s control scheme was the subject of confusion for some reviewers at the time, but once you get used to it, it’s actually a very elegant solution for getting around the Dreamcast’s lack of a second analog stick. Aiming is handled with the control stick and movement is done by using the left and right triggers to go in their respective directions. This allows you to comfortably and quickly aim while moving without having to resort to using the face buttons for aiming like games on the PSP or Nintendo 64 would have to. You can’t shoot while moving, but selecting your lock-on targets with the stick before stopping to fire is something you’ll be doing constantly, so it’s worth mentioning that this feels easy to perform. Weapons are assigned to X, Y, and B, and shooting is done with the A button. It’s possible to fire whenever you want, but doing so without charging up first is both far less efficient and heretical to the game’s title. Charging occurs automatically when you’re not firing, and weapons have three levels of charge. Generally speaking, you’ll always want to charge to the highest level in order to maximize your damage, but sometimes a lower charge level is sufficient against a weakened enemy, adding a bit of strategical decision making to the moment-to-moment gameplay. Bosses are the only foes that take a bit of extra work, requiring you to destroy a shield generator on their body before you can damage them. This idea feels more like a nuisance than something that adds nuance, since it’s far too easy to lock-on to the wrong target when the generator is sandwiched between multiple body parts.

Despite not actually being an arcade game, the structure, difficulty, and limited credits certainly make it feel like one. Players are given up to three credits to complete the game and you only get one life per credit. There’s no way to earn credits and even healing is heavily restricted, only occurring at the end of a mission or if you’re lucky enough to find a power-up. Once you’re familiar with the game, a one credit clear is easy enough on the normal difficulty, but it does mean that your first few runs will likely end in failure. Charge ‘N Blast throws plenty of foes at you and your health bar tends to get depleted after no more than a few hits. Your combat suit also runs on a very limited amount of energy, resulting in a timer of 50 seconds that counts down as you fight. Clearing out an encounter gets you an energy cell that’ll grant additional time, but it can be hard to work your way out of a deficit if an encounter takes longer than expected. Running out of time is equivalent to dying and costs a credit, which feels too harsh and anticlimactic when it ends your run. A successful playthrough is only around 15-20 minutes, so it’s at least easy to jump back into the fray without getting too discouraged. 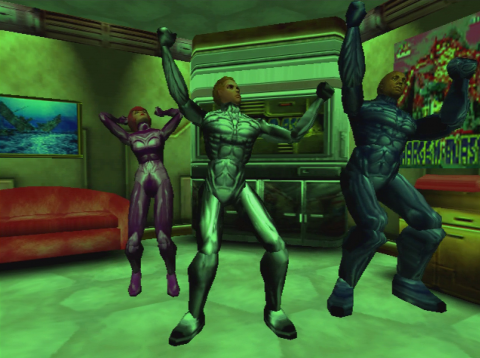 There are five missions in Charge ‘N Blast, each made up of a few encounters and a boss fight. The first mission takes you through the city of Nest as you shoot a bunch of bug-like aliens. Mission two (dubbed “Party on the Beach”) has you fighting fish and fishmen alike as you work your way to a dock to face off against a Godzilla-inspired sea monster. Things get bumpy with mission three, which takes you underwater and pits you against impressively durable sea creatures and an octopus boss that bombards you with explosives, making this the hardest mission of the five. Mission four is a trek through another city like mission one, though this time the city is brightly lit and full of flying aliens and a giant worm boss. The final mission is as straightforward as it gets – blast your way through the remaining aliens and destroy their mothership. Beyond these five missions, Charge ‘N Blast offers slim pickings, with a two player cooperative mode and a time attack mode being the only other options. When playing cooperatively, players share life and time, making it potentially more challenging if the players aren’t of similar skill. The time attack mode is rudimentary, challenging you to beat the game as quickly as possible on a single credit.

The action is punctuated with a pulsing electronic soundtrack that’s pretty decent when you can actually focus on it, but it’s all marred by some very obnoxious voice clips that tend to drown out everything else. A handler of sorts will speak to you throughout the game, warning you about your time limit and restating your mission objectives, which is all fine and good until they start chiming in on the action. Every single time you fire a charged shot and select a weapon, you’ll hear them say “charging ammunition!” and they’ll be sure to mention that they’re giving you an energy cell after every single encounter. It’s absolutely maddening and doesn’t help the player at all, so it feels like a truly bizarre design choice. 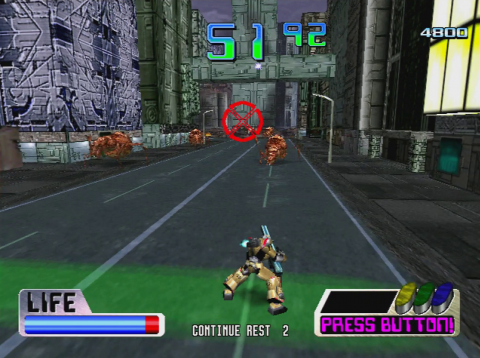 It’s not surprising that Charge ‘N Blast has been completely forgotten, since there isn’t much to latch onto beyond the gameplay itself. What you see upon starting the game is really what you get the whole way through, so it all comes down to how willing you are to learn its intricacies. If you find that the mechanics click with you, it can be a satisfying game to blast through and you’ll see visible improvement before long. Give Charge ‘N Blast a chance if you’ve had your fill of the usual suspects on the platform and you just might be surprised at how eager you are to come back for more.