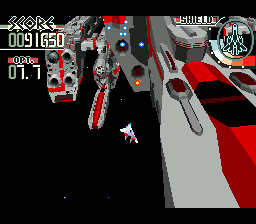 Silpheed on Sega CD is a follow up, ergo sequel, to the original Silpheed on computers. Some places argue it’s actually a remake, but this is debatable. There are similarities, such as some enemies, the final boss, and some story text (featuring a fat guy named Xacalite/Zakalite). However, if you entirely redo the graphics, music, sound effects, and voiced dialogue, in addition to the level layouts, backgrounds, general structure and functionality, plus most enemies and bosses, at which point can you confidently proclaim it as a sequel rather than a mere remake? For the record: none of the Silpheed games were numerically titled.

The fan-site Silpheed.org actually shows comparison shots of some of these similarities, such as the smaller enemies:

The original Silpheed never explicitly said what year it took place, only mentioning that mankind discovered an alien vessel in 3032. The Sega CD follow-up takes place 44 years after this event, though doesn’t mention the alien vessel: “In the year 3076, an unmanned solar space force fleet suddenly attacks the colony planets. The Grayzon System, the central photon computer that controls the galaxy network on the mother planet Earth, was network-jacked by terrorists. The leader introduced himself as the ‘Zakalite’. The survivors of the Galaxy Union and the Colony Planets Fleet assembled all their forces to strike at the ‘Zakalite’. Sixty-four light years lay across their way to the solar system. After the addition of reinforcements to the tactical fighter craft, the SA-77 Silpheed, the remaining fleet began their counter-attack.” Although the difference between Xacalite and Zakalite could be due to localization, the YGGDRASSIL computer of the first game has become Grayzon, Gloire isn’t mentioned, and the Silpheed model itself is also different, switching from SA-08 to SA-77. Surely with these differences it must be a separate game? The only indication that the Sega CD version might be a remake, is that it also features Zakalite.

Silpheed‘s major claim to fame on the Sega CD was of course its – for the time – amazing polygonal graphics. This was achieved by overlaying small spaceships, controlled in real-time by the player and AI, atop compressed video footage of polygonal environments which had been pre-rendered, presumably on enormously powerful computer workstations. By reducing the colors to give everything a flat-shaded look, the video footage didn’t have the graininess associated with other FMV titles on the Sega CD. Enhancing the illusion was that areas of collision detection were synced to the backgrounds, so you had to avoid hazards such as oncoming asteroids, gun-turrets and enormous laser beams. In all, it was a skilful and technically impressive achievement by GameArts, making great use of the Sega CD’s ability to stream video footage. Although critics complained about the lack of background interaction, a lot of players were convinced that they were seeing real-time 3D being generated by the Sega CD.

Comparisons made with the first Silpheed, when debating whether this was a remake or sequel, are important because, at the time, almost no coverage of the Sega CD release went without comparison to Argonaut’s FX Chip-based Star Fox on SNES. Both released in 1993, it seems inevitable given their rival hardware formats and similar themes of 3D-in-outer-space that corporate PR, the press and players would all latch on to the idea of them competing; some even argued that Sega specifically orchestrated the development of Silpheed in response to Star Fox, and that it was directly influenced by Argonaut’s release. While the documented press-led rivalry between the two games isn’t in question, it’s misleading to imply that Star Fox influenced Silpheed, given that it was a follow-up to a game which predates Star Fox. As already mentioned, Star Fox has some rather uncanny similarities to the 1986 release of Silpheed. Given the console-centric nature of magazines at the time though, it’s unsurprising they didn’t give coverage to the computer original. Besides which, there were several 3D games released prior to 1993 which both games could have also drawn influence from, such as Elite, Namco’s StarBlade, and if you want to be really obscure, maybe even Virus on the Acorn Archimedes. 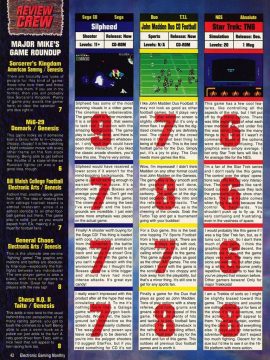 There was tremendous pre-release hype for Silpheed, which was followed by positive but tempered reviews, some critics expressing outright disappointment or negativity. A common complaint was that Silpheed was too much like older 2D shmups, compared to Star Fox. Which is unfortunate, because it’s actually aged extremely well, especially compared to its low-framerate SNES-based rival. In contrast to magazines such as EGM, GameFAN gave it a perfect score. Even more interesting is that EDGE magazine gave it 7/10 in their launch issue, one point higher than Gunstar Heroes and Zombies Ate My Neighbors, all in that same issue.

The mechanics are broadly similar to the original Silpheed: you have various levels set in space, inside fortresses and above planets, with new weapons being given when high scores are achieved. It also retains that same oblique viewing angle where enemies and projectiles converge on a horizon point, although the effect is much subtler now. A big change is the weapons system, since while the Forward Beam, Wide Shot, Phalanx and Homing all make a return, the overpowered Laser is absent. In addition, there is now also optional weapons: a Graviton Bomb, EM Defense System, Photon Torpedo and Anti-Matter Bomb. These are also acquired after reaching specific score goals, and are powered by a numerical ammo count on the left side – meaning different Options can be used a varying number of times before running out. As before, you have shields which deplete when taking damage, resulting in eventual weapon loss and destruction. 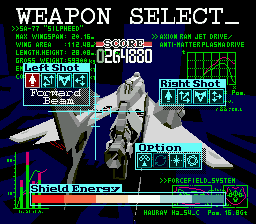 The addition of option weapons dramatically changes the dynamics of the action from the game’s predecessor. Whereas before you simply had to choose weapons for the left and right wing, then hold down the space bar while avoiding some enemies, now there is greater strategy on which weapons to choose and when to fire them. Judicious use of option weapons will net a much higher score and unlock further weapons faster. The already exciting shield system is made even more so since, when down to your last sliver, the inclination is to use all your option ammunition, since it’s use-them-or-lose-them time. Furthermore, the action now takes place over 11 stages, as opposed to 20 like in the original, the content that’s available is much more diverse.

By far the most significant improvement over the original, and the reason this deserves to be regarded as a sequel rather than remake, is the phenomenal increase in the range of content. Being based around pre-recorded footage, there is no repetition of environments, which hurtle past at speed, throwing planets, moons, asteroids, gigantic battleships and claustrophobic space-fortresses at players. Each stage has smaller attack craft to shoot down and hazards to avoid, plus bosses (which do unfortunately repeat). Whereas, with the first game you’d seen all it had to offer less than a quarter through, now the ever changing stages give you a reason to persevere onwards. It does a far better job conveying an epic, intergalactic struggle than the first game. Previously, only when inside a space fortress was there a feeling of magnitude to the enemy, and perhaps with the end boss. With the Sega CD follow-up nearly every stage has you scrambling your tiny fighter over an impossibly huge battleship, or other enemy controlled platforms, weaving between columns and enemy fire. On a couple of stages the background focuses on large scale battles between the enemy and your side, with distant cruisers exploding into a thousand pieces of polygonal shrapnel. Afterwards, your ship heads towards the action and flits between the enemy ships, like a fly harassing an ogre.

It would be remiss not dedicating a paragraph or two to the sound, both the dialogue of your crewmates and – as expected – the astounding music. During battle, other pilots on your team regularly radio in with comments on the action, such as the size of an enemy ship, or the direction the battle is going. They’re a little overacted and cheesy, but all add to the charm of the game and illusion of taking part in an inter-planetary struggle.

The music, meanwhile, is arguably even better than the original PC-88 soundtrack, full of energy and really complementing the action. They’ve got a kind of funky 1980s vibe to them, and come highly recommended.  In 1993 there was also an incredible arranged version released, Silpheed: Official Game Music Sound, which elevates the in-game music to an entirely new intergalactic dimension. The excellent Silpheed.org has a download of this, allowing you to hear for yourself. What’s interesting about the arranged soundtrack is that it includes a previously unheard track called “Planet of Ice,” slotted in between the tracks for Stages 4 and 5, implying it belonged to a stage which was cut from the final game. If you zoom in on the map in this Japanese magazine scan, you’ll see that it could well have been the planet Pluto. There’s also a couple of tracks remixed from the PC-88 original.

For most visitors to this site, the Sega CD release of Silpheed will probably have been their first exposure to the series, and for many players it still has a soft spot in their hearts. It promised the cutting edge of console technology, and for a little while, at least, it really was one of the most visually impressive console games of the time. Some magazines criticized the music, but it had a unique bombastic flavor, unlike today’s bland mediocrity and outsourced film-score soundtracks. When they complained about the mechanics, they never said they were bad, only too similar to what had come before. In truth, under the sheen of those pre-rendered polygons, it really was almost identical to the 2D shoot-em-up released in years previous, but as a representative of a moment in gaming history, it has a special kind of magic. The optical-disc medium and technology has developed astonishingly quickly since 1993, but there’s still a lot of fun to be had playing Silpheed today.

As mentioned, Silpheed on the Sega CD has similarities to the first game, which is nice for fans of the original, but there’s also what might be the most obscure Easter egg of all time, as pointed out by Silpheed.org. Did any other eagle-eyed players notice the GameArts logo replicated in Stage 4? What about if we add some blue coloring to the hexagons – is the shape a little more recognizable now?

Detailed Japanese magazine coverage of the Mega CD release, including an interview with the team behind it at GameArts (Japanese text), from Graphic Science Media. Courtesy of Silpheed.org.