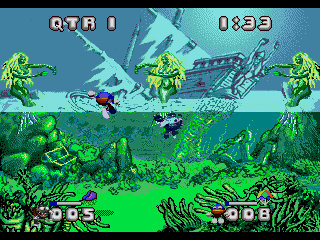 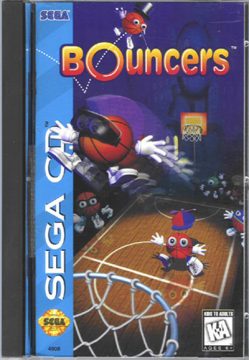 For as long as the Internet has existed, nerds have argued about the genre classification of certain games. In a way it makes sense; for many years, designers have blurred genre lines by combining mechanics from games that traditionally have little to do with one another. Survival horror games combine the inventory and puzzles of graphic adventures with the third-person shooter, real-time strategies mix the careful planning of tabletop games with the immediacy of action games, and it’s no easy feat to name a single title in the last decade and a half that doesn’t have some kind of RPG-inspired mechanic baked in.

Yet despite hybrid genres being so commonplace, Bouncers, a combination 2D fighting/basketball game for the Sega CD, still feels a bit out of left field. And while the mental image conjured by that description might depict two tall, lanky guys beating each other up while a ball gets tossed repeatedly into the air, the reality is even stranger; each player controls an anthropomorphic cartoon basketball whose goal is to thrust their whole body into one of two or three basketball hoops around the stage in order to score more points than the other player before the time is up. Even for the Sega CD, a system with no shortage of strange, inscrutable games, the existence of Bouncers is nothing short of perplexing. 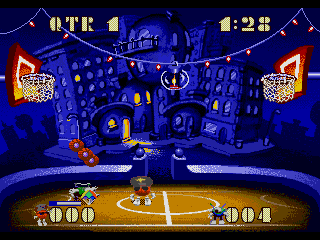 That premise might make Bouncers sound worth checking out based on novelty alone, but the reality is that the game is practically unplayable. This is mostly due to the fact that developer Dynamix opted to give a game that stars sentient sports equipment realistic physics. Moving forward begins very sluggishly due to a slow acceleration before the player breaks into a slippery run. The player’s speed determines the distance and trajectory of the player’s jump. Once in the air, the character is given the weight and bounce of an actual basketball – meaning the player mostly gives up all autonomy and control of their character as soon as they’re airborne. And once they’re up, they don’t go very far, certainly not high enough to reach the nets. The Bouncers do bounce along the ground, but there’s no way to dribble or slam yourself against the ground to gain more height. The player must simply watch helplessly as their Bouncer pitter patters across the floor, waiting for it to come to a complete stop before regaining control.

Other than running and jumping, the Bouncers also have the ability to smack the other player, presumably to block a shot into a potential basket. But again, neither player has the ability to actually reach a basket, so it seems like a moot point. In fact, smacking is so powerful, it seems to be the only way for another player to get enough air to potentially make a successful shot, meaning the only legitimate use of a player’s ability is to help their own opponent score. And… that’s it. There are no other abilities or moves in the game. Despite a cast of eight unique looking characters, each are exactly the same with the same three worthless abilities.

Periodically, power-ups will enter the arena. Most of these augment the player’s abilities in some way that either helps or hinders, such as increased bounciness or slower running. Yet none of them suddenly make the game any more playable or fun. The only useful items are gems which, when touched, give the player points. This seems less like a boon for the player, however, and more like a tacit admission from the developers that they released a broken game, so unwinnable by design they had to add some sort of concession.

While the exact circumstances that led to this disaster of a piece of software may never be known, it is clear that some love went into the development. Despite the very barebones presentation and UI, many of the stages have a hand-drawn quality to them similar to the backdrops in Dynamix adventure games such as The Adventures of Willy Beamish or Space Quest V: The Next Mutation. Also hidden on the main menu are goofy, CG animatics for each of the eight characters that act as mini-cartoons. Their existence being divorced from the main game hints at a fractured, rushed development that made Bouncers feel less like a unique, stylish hybrid and more like a half-baked casserole consisting of disparate mechanics and unrealized potential.