Jules Verne’s classic adventure novel Around the World in Eighty Days has been a popular target for adaptations of widely different style, quality and faithfulness to the source material. Surprisingly, one medium which didn’t have too many retellings of the story about Phileas Fogg’s wager was video games – sure, there was a forgettable tie-in to an equally forgettable Jackie Chan movie but that doesn’t really count.

Inkle’s 80 Days, released in 2014, might be the novel’s first worthwhile video game adaptation – which is surprising given that the phrase ‘mobile game based on a public domain work’ sounds like a longer way of saying ‘shovelware’. Fortunately, this time it’s not the case: 80 Days is an original and ambitious title.

80 Days diverges significantly from its source material. The novel’s major characters like Fix or Aouda now appear only in specific subplots. Path taken by the protagonists is not fixed as the player can plan his route in multiple ways. The setting itself isn’t the familiar 19th century but a science fiction reimagining with steampunk vehicles, intelligent robots and alternate history politics. Despite not following the events of Verne’s novel, the game manages to capture its spirit – there’s a sincere feeling of adventure and discovery here, and despite minimalistic graphics and the lack of free roaming gameplay it might be the best approximation of actual travel in the video game medium. 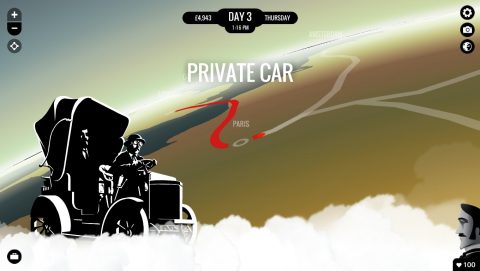 Players begin their game in London and are tasked with returning there after circumnavigating the globe. Travel is as simple as picking a city on the map – provided you know how to get there, there is a direct connection (e.g. without changing means of transportation) between you and your destination, you have enough money to pay the fare and Fogg’s health allows him to continue the journey. As faster and less exhausting options are usually more expensive, success is all about managing your resources (if health gets too low you’ll need to wait and rest, if you run out of money you might need to wait a few days until the bank decides to give you a loan). It’s all fairly simple – especially given how much money can be made through trading – and serves more to discourage wasting time and to connect gameplay and story than to provide any real challenge. 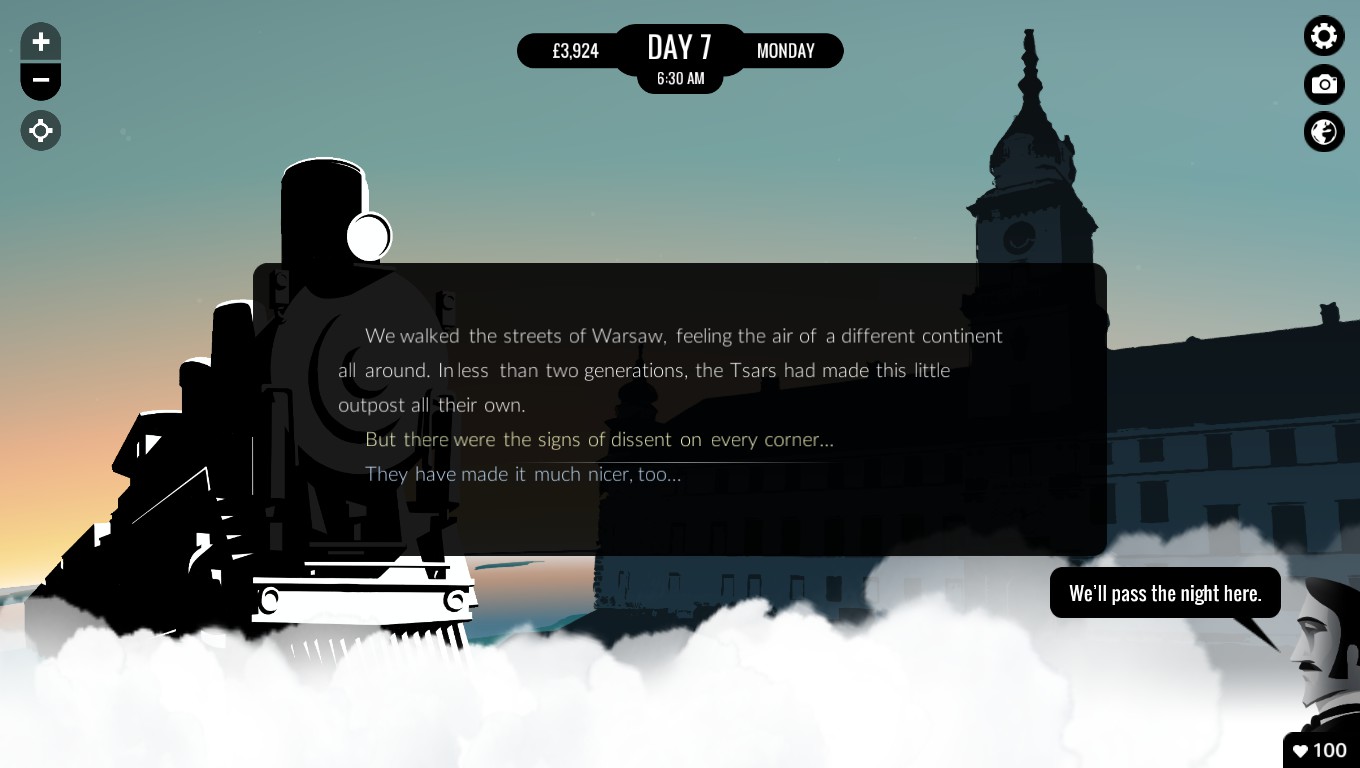 At its core, 80 Days is more of a choose your own adventure game than the one focused on resource management. Finding a course of action that will allow you to reach London within a time limit is an easy task but sometimes a less optimal choice may be more interesting – especially if the technically better decision would result in abandoning a sidestory. If you can pass a city without stopping or leave as soon as you arrive you may get a better time but sometimes you just want to spend some time exploring. Different places and different routes have different stories associated with them – they’re presented as text-based events in which you choose what the protagonist says, does or even thinks about the situation. While some of those choices are just there for flavor, many affect the game by locking or unlocking routes, changing speed or direction of travel or affecting Fogg’s health. Occasionally, you’ll find more elaborate ones which significantly change the story: things like solving a murder on an airship, collaborating with a mysterious thief or travelling to the North Pole. 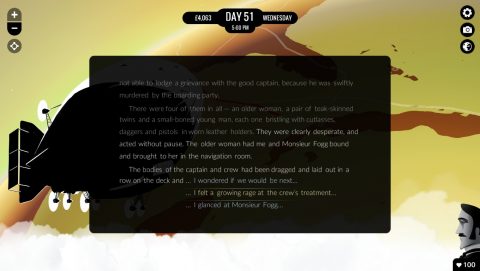 The gameplay is not perfect. The aforementioned larger storylines often require extremely specific behavior which sometimes makes sense from the storyline perspective and prevents the game world from feeling completely player-dependent (Black Rose – if she appears in the game at all – will always travel from Paris to Nice; you can’t know that but it makes sense that going the other way makes that questline impossible to continue) but often is completely arbitrary and illogical (you can only get to Belgrade on a military train from Vienna which has a logical explanation; what doesn’t make sense is that no matter the day of your arrival in Vienna, the train will always have departed if you came from the south and it will always wait for you if you came from the east). Also, some of the longer text-based events or event chains happen in places which, due to how the map is designed, you’ll have to visit in many playthroughs (e.g. Paris or the airship from Yokohama to Honolulu) – for a game that is supposed to be played multiple times, this can drastically reduce the replayability due to how repetitive it feels to solve the same murder mystery five times. 80 Days wants to be replayed but design decisions like that discourage this. 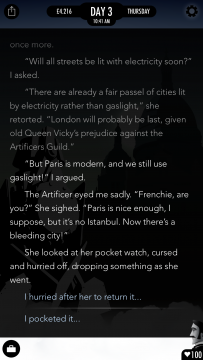 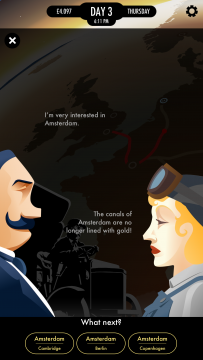 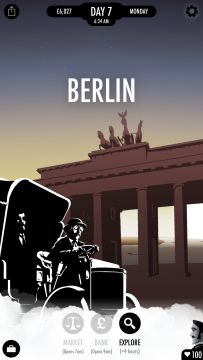 n 80 Days, player controls not Phileas Fogg but his valet, Passepartout. Because of that, Fogg’s role in the narrative is greatly reduced – his wager is why you’re travelling and his money allows you to move forward but other than that, he just is there, occasionally reacting with approval or disapproval to your decisions. 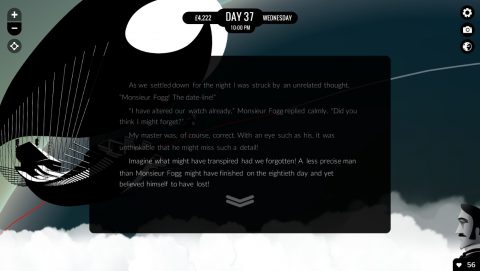 Despite the fact that Passepartout is the game’s playable character, he isn’t its main focus. His (player-influenced, but always related to living in Paris during the war against Austro-Hungarian Empire) backstory is presented with as much detail as the lives of secondary characters you’ll meet along the way: Mongolian princess who studies engineering and secretly plots against Russian empire, Japanese navy officer whose family rebelled against the emperor or rebels hiding in the ruins of Belgrade. The game’s characters and their stories are all secondary: they’re the means by which 80 Days presents its world. 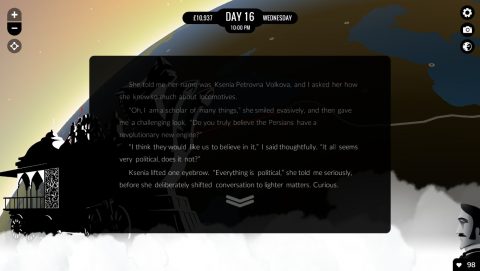 The game’s authors explicitly base their creation on the idea of “multicultural steampunk”: their vision of retrofuturistic XIX century includes not just Victorian Britain but also Eastern Europe, India, China, Africa, Middle East and both Americas. Elements of different cultures become prominent as you travel through different territories and there’s clearly been a lot of work put into both researching them and putting them into the setting’s alternate history and imaginative technology. The former determines many of the game’s common themes: nationalism, struggle for independence, ethnic conflicts and choice between local traditions and modernization. The latter gives us some really interesting inventions: Austrian robot soldiers controlled by music, Indian moving city and giant mechanical elephant, Haitian robot-animals supposedly powered by voodoo. 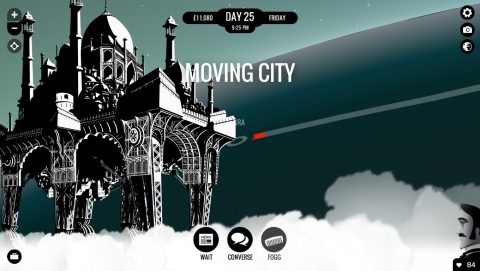 80 Days builds its world not only with writing but also with graphics and sound. It’s all quite minimalistic but it works well: the world map is shown from dramatic angles, routes you discover spread across the globe to triumphant background music, each city you visit is represented by a landmark and when you travel, you’re shown a static, black and white, high contrast picture of the protagonists inside a vehicle in the top-left corner. When you arrive in the city, you’re greeted with the sound of crowds and when you leave, noises of an appropriate vehicle are played. Everything works together to build the game’s atmosphere, even though character portraits could’ve been better and the music does get repetitive after a while. 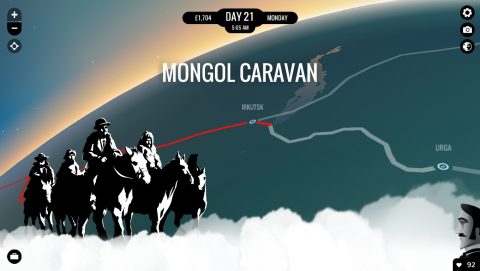 In some respects, 80 Days feels like a game from a more experimental period of PC gaming (e.g. console crash-era microcomputer games or mid-to-late 90s PC RPGs): it doesn’t strictly adhere to a genre, it isn’t afraid to be creative and it occasionally feels clunky and reliant on trial and error. On the other hand, its user interface (which isn’t too convenient on PC) and general simplicity of gameplay are clear indicators of its mobile roots, although fortunately without most of the negative connotations that come with it.

Links:
80 Days official website
Towards steampunk without steam – one of the articles that inspired the game’s setting
80 Days walkthrough (almost required to follow some of the more obscure questlines)