Revengers of Vengeance may not come up in conversation often, but when it does, it’s usually because of its title. Yes, it’s ridiculous. But that, at least, isn’t the developer’s fault (or merit); in Japan, it was called “Battle Fantasy”. Extreme Entertainment, American publisher of such extreme fare as Super Solitaire and the Risk-clone The Third World War, gave it that name and slathered the box with silly slogans (“Revenge is sweet… they aren’t!”, “Based on a True Story!!”) in a probable effort to manufacture a campy appeal for a lackluster game. Then again, they may have actually been trying to make it sound cool. Wolfmen and ninjas: this game is cool.

A similar impulse on the developers’ part likely explains the game’s standout aspects. At its center lies a somewhat broken Street Fighter 2 knock-off with slightly simplified mechanics. It is also slow, choppy and prone to constant framerate drops. Oddly, there’s an option to turn off character shadows, speeding up the game substantially in certain stages. It certainly makes the experience less tedious, but it remains a mediocre fighter through-and-through. The game can’t handle those sprites.

Micronet had been there before; in the years leading up to Revenger, they’d released Heavy Nova and Blackhole Assault, two robot-themed fighters that had quickly acquired reputations for being terrible. In Heavy Nova‘s case, they’d incorporated clumsy platforming levels in the single-player mode; with Revengers, they’d go with RPG, and hey, why not add a little shoot-’em-up as well? 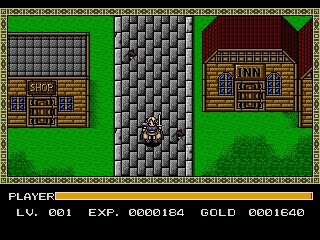 And so the Quest for Venum mode begins in this way: you choose one of 10 characters. They’re mostly fairly standard anime and fantasy types, though that giant rhino man is pretty impressive. In fact, the game looks rather nice when it’s not moving. After watching a short, semi-animated cutscene, you begin the game in a top-down RPG town with an interface straight out of Ys, border and all. It is strictly functional, however; there are no NPCs walking around, no houses to enter, nothing but shops. The story is perfunctory: a demon named Venum is about to be revived, and you have 200 in-game days to become strong enough to face him. Each character has their own added reason; the elf wants to save her forest friends who’ve been turned to stone, the knight wants to avenge random dead people. “I want to hug my friends again!”

There are two main ways to obtain the EXP. and Gold you need to raise your stats. The first is to repeatedly fight the other playable characters through the VS fighter engine. This is a little unbalanced because there’s no way to tell how strong they are relative to your current level, and stats even affect your jumping height and walking speed. Thankfully, the lack of balance can also work in your favor: the AI is incredibly dumb, so as long as you spam projectile attacks, you’ll be OK. This approach also has the advantage of sparing you the engine’s occasional bugs and quirks, such as when enemies somehow get up facing the wrong direction, leaving their backs entirely exposed, or when attacks suddenly refuse to come out for a second or two.

This looks much better in screenshot form.

The second method is to take on jobs at the guild. In actuality, they’re short vertical shmup levels, complete with (very easy) boss battles. Oddly, it costs money to take them on, but if you succeed, you get twice as much back. There are 5 in all, and while they’re as basic as it gets, they’re not actually bad at all. There’s also a menu-based gym in town, but it’s one of those annoying things where raising certain stats lowers others, because it’s a well-known fact that you can’t improve your stamina without immediately getting dumber. Reaching the end is a little tricky, though. One of the shops in your nameless hub town is a greedy fortune-teller’s; you have to pay her to level up, and she won’t tell you whether you have enough experience points to do so until after you’ve paid. If not, you’ve just wasted 50 gold. “But I already paid, you crook!”

You can also pay her to read your fortune. She will hint that going to a certain place (meaning a certain opponent’s stage) will result in “a nice thing happening” or something equally vague; the place she describes changes every time you ask her. Throughout most of the game, this is essentially meaningless, but if you ask her after having beaten each of your 10 opponents (including palette-swapped yourself) then go beat the corresponding opponent again, you will get a special item allowing you to access the mid-boss, and then Venum himself. The whole process is blatantly misleading; whether it’s intended to lengthen the game artificially or just reflects a lack of forethought on the developer’s part is anybody’s guess. Under-developed as it is, the RPG mode (and its shmup levels) is still relatively cool the first time around. Beyond that, you’re left with a basically incompetent game, and it’s hard to imagine anyone bothering to play the arcade mode for long. This screenshot of the credits may help explain the game’s problems: The busiest man in the games industry?

That’s right, while multiple people worked on the game’s art and animated cutscenes, it seems to have been designed and coded by a single person, a very ambitious undertaking even in 1994. Perhaps Micronet was too cheap to hire a second programmer. At least their artists and composers were pretty decent. The portraits for shop owners are all quite nice, as are the cutscenes, and there are a handful of really good tracks to be heard. But wait, that’s not all! If all those modes and gameplay types aren’t enough for you, they were kind enough to include another game as a bonus, accessible by entering a code alluded to by the RPG mode’s pub owner. Called Black Ball Assault 2 – the prequel was hidden in Blackhole Assault – it’s a 2-player competitive hybrid of Pong and Arkanoid with a single stage and slightly dubious collision detection, once again programmed by AZY.