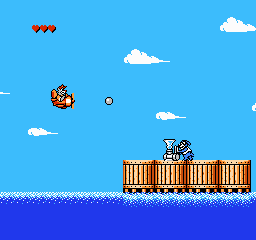 By this point, Capcom has stretched itself thin. TaleSpin is technically the fourth Disney game release, and the developer’s exhaustion has become evident. As a delivery man, Baloo the bear (originally from The Jungle Book) delivers a variety of cargo to the people of the cape. It’s not an easy job, as Don Karnage and his pirates attempt to shoot Baloo out of the sky at every turn and steal his goods.

TaleSpin is an anomaly when compared to the rest of the Disney releases. Rather than a platformer or a sidescroller, TaleSpin is a horizontal shoot-em-up. Unlike most shooters, there’s also a health gauge that can be replenished throughout the level, and colliding with objects causes absolutely no damage. On top of that, it’s possible to flip Baloo’s plane upside down and fly backwards. This also causes the scrolling of the stage to come to a halt and reverse direction. Though odd, it makes collecting power ups and bonus items much easier. It’s also extremely important during boss fights, as a few of them will try to attack you from behind. Hot dogging it while fighting bosses is actually pretty fun, even if it is a bit confusing at times. 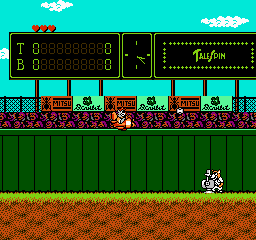 Cash is awarded at the completion of each stage, and can be used to buy upgrades for Baloo’s plane before the next stage. Speed upgrades, extra lives, and additional firepower can be purchased from the shop-often at very high prices. In some cases the shop makes life easier, since the upgrades are permanent and it’s not necessary to grapple with enemies over them like most other shooters would have you do. At the same time, many of these upgrades should have been granted at the start. Baloo can only fire a single shot initially, and must wait before the bullet disappears before he can fire another. There are upgrades that enable you to fire two, three, or as many as you can possibly fire at once. Being forced to buy rate of fire upgrades is ridiculous, especially since the amount of bullets you can fire strongly affects the difficulty of the game. It’s clear that this decision was made to make the game harder, thereby increasing the game’s playtime.

TaleSpin hits the wall in the presentation department. The sprites are small and dull-looking, the stages have very little detail, and the sound effects are little more than a bunch of blips and screeches. The music isn’t particularly interesting, but at the very least isn’t annoying. Capcom had an excellent chance to make impressive stages with the backtracking ability Baloo has, but completely ignored it. There’s very little variety in each stage and each one plays like the last. 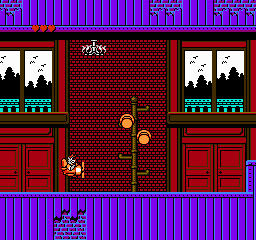 TaleSpin is yet another victim of lazy, rushed design. It’s not the worst game ever produced for the NES, but there’s little reason to play it outside of nostalgia. Capcom is responsible for a large number of highly respected shoot ’em ups, and if enough time was spent with TaleSpin it may have become one of the greats.

The Game Boy game is a near-perfect port of the original. The size of the stages has been condensed somewhat, though the actual layout is nearly the same. Like the other ports, there is a loss of background detail such as the flashes of lightning in one stage. The screen is also zoomed in, resulting in larger sprites than on the NES. Oddly enough, the graphics look a bit better than the NES version. For better or worse, it’s the exact same game. Today, however, there’s no real reason to play the Game Boy port over the original. 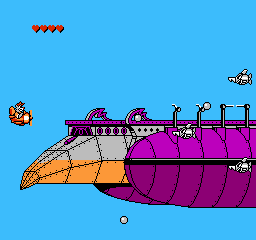