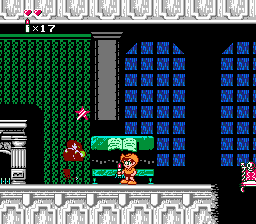 Capcom has been very careful about making games that promote popular Disney movies and animation series. In another unusual move, Adventures in the Magic Kingdom promotes the Disney theme park in Florida.

As a cowboy hat-wearing child, who’s completely unrelated to anything Disney, you explore the Magic Kingdom theme park searching for silver keys. There are six keys, lost as a result of Goofy’s idiocy, and when they have all been found can be used to unlock the Enchanted Castle. The goal is to find Mickey, apparently, even though he introduces each of the attractions. There are five attractions that can be entered, from The Pirates of the Caribbean to Space Mountain, all of which are accessed from a main square reminiscent of RPG town. Several park-goers will ask you trivia questions related to Walt Disney’s creations. Answering correctly will grant access to the park, while another series of questions leads to one of the lost keys. Some of them are easy, but others are relatively obscure, like asking about specific members of the early Mickey Mouse club. 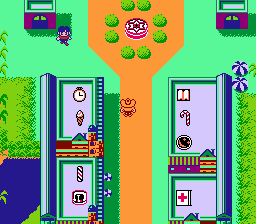 Unfortunately, none of the attractions are any fun. Each one is its own self-contained mini-game, and more often than not the controls are terrible. The Haunted Mansion and Pirates of the Caribbean zones are side scrolling platformers swarming with enemies. Barrels can be used to mow down pirates in the Caribbean area, but you don’t actually get a weapon that you can freely use until the very end of the stage. This leads to a lot of cheap hits that you can’t do anything about, which is exacerbated by sparse amounts of barrels. The Haunted Mansion is a bit easier in that you can hurl candles that you find lying around at ghosts and zombies. They’re in limited supply though, and you need to keep grabbing ones off the wall to keep them replenished. Even still, the platforming areas leave little room for error, and it’s even possible to smack your head against a moving platform and fall into a pit. There aren’t any checkpoints either, requiring you to start the level from scratch if you die.

Space Mountain is a strange on-rails first person shooter mixed with quick time event sequences. You have to shoot down oncoming space ships and missiles before they smash into you while making sudden random changes in the ship’s direction. Failure to change direction when the game prompts you damages the ship and forces you to repeat the sequence. There’s not much to the game besides frantically shooting at things and changing directions, and the graphics aren’t much to look at. Mercifully, Space Mountain is short, but because of the rapid string of QTE-style sequences there’s a good chance you’ll get killed and have to play from the very beginning several times. Space Mountain is probably one of the most tolerable attractions, but it still isn’t fun. 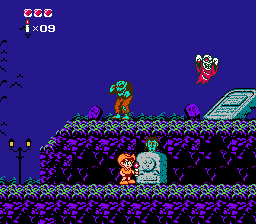 Big Thunder Mountain and Race Autopia are the final two attractions, and are both racing games. Autopia is a traditional overhead racer, vaguely similar to Bump ‘n’ Jump, complete with suicidal rival karts, broken bridges, and bottomless pits. Incidentally, the main goal of Autopia is to simply survive and get to the end of the track before time runs out. The stiff controls are the main enemy, making it very difficult to avoid careening into walls or other karts. While crashing doesn’t kill you, it severely reduces your speed. If your speed isn’t high enough when you need to jump over a chasm, you’re out of luck. Enjoy getting thrown back to the beginning of the race. Hopefully the real Autopia was more fun and less deadly.

Big Thunder Mountain only lasts about a minute and is especially unsatisfying. The main goal is to race an entire train down the mountain, evading boulders lying on the tracks while trying to avoid pathways that lead to certain death. The major problem is that you can’t see far ahead enough to determine which track is the correct one, resulting in the game being nothing more than a crapshoot. It’s a good thing that it’s short, considering the enormous amount of luck and memorization that would be required if it was longer. 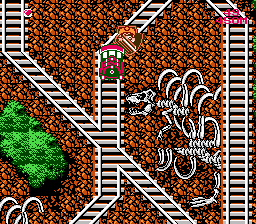 Unlike most of the other Disney games, there’s no redeeming value to Adventures in the Magic Kingdom. One can see how it was meant for kids, but the frustrating side scrolling levels make it very off putting. It really just feels like an extended advertisement to convince kids to go to the real Magic Kingdom. Oddly enough, this game was only released in North America and Europe, with no Japanese release, even though there is a Disneyland in Tokyo.