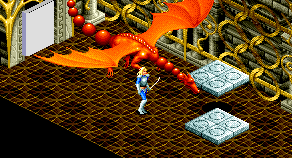 Light Crusader is a dungeon exploration/spatial puzzle game along the lines of the Landstalker series by Climax. The aforementioned Landstalker is thought to be its greatest inspiration, but rather than plucking a whimsical realm from HAN’s Treasure-land for the game’s setting, the development team chose to frame it in a grittier motif that would be more at home on the Amiga or IBM PC. It has a very European Fantasy/Dungeons & Dragons feel as opposed to something like Akira Toriyama’s Dragon Quest designs, and lamentably, it doesn’t quite work. Rather than being anime-tinged like Capcom’s Dungeons & Dragons arcade games, or even Vallejo-esque, the art is disappointingly amateurish. 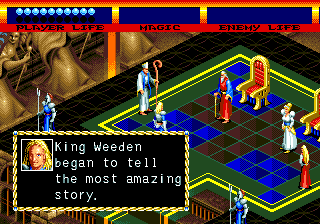 Light Crusader actually begins promisingly, with the game’s title written in a cool font that appears to have been inspired by Roger Dean of Yes album cover fame. (As a side note, the first sword available for purchase in the town shop is called the “Relayer”, which was actually the original title for this game – it also shares the name of an excellent 1976 Yes album. Coincidence?) Upon starting a new game, the player is treated to a text introduction illustrated with shockingly poor stills, badly drawn in the aforementioned Western-influenced art style. This is followed by an oddly animated sequence showing the hero riding his horse through a forest, en route to the task at hand. Finally the hero is seen, in the game engine, at the foot of the King, who predictably asks for help.

Upon accepting the challenge, the hero is off to glean the proper exposition from the incredibly inanimate NPCs peppered throughout the nondescript town. The player can also buy weapons and elemental magic for the journey ahead. Upon being clued in to the fact that the action can be found in the graveyard, the player must push some monuments around The Legend of Zelda-style and descend into the abyss. 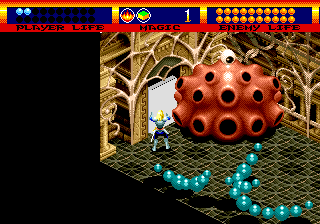 Graphically, Light Crusader is inconsistent. Despite any qualms with the art style, the characters look pretty decent in-game, if a bit anorexic. The backgrounds are also passable, though generic in a way that is almost forgivable. The map and item screens are simplistic, but legible and relatively user-friendly. The main character is well animated, though his movements are awkward. Apparently Treasure just doesn’t do “realistic” humans very well. The various baddies the player comes across in the single large dungeon are okay as well, but none of them are overly interesting. Conversely, the bosses are well-drawn and also have the distinction of being some of the only designs that seem like they could be from a Treasure game. Must be the patterns.

Another odd thing going on graphically with Light Crusader is that some of the effects are polygonal in nature. Doors are flat-shaded polygon objects that open in 3D space. When the hero strikes a wall or kills certain enemies, the particle effects consist of a burst of tiny, flashing triangles. While not completely appropriate in terms of the game’s aesthetic, they are pretty cool to look at. Also, to its credit, the game does a good job of implementing a real sense of depth and weight to the environments; though there is a propensity toward blind leaps of faith. This is due to the fact that the foreground objects do not become transparent like they would in later games of this type on more powerful hardware. Understandably, you cannot rotate the camera to alleviate this either. Overall, the visuals in Light Crusader, with the exception of the polygonal touches, are decidedly mediocre at best. Normally, this wouldn’t be such a big deal, but when compared with any of the other games Treasure released for the system, this one doesn’t quite stack up. 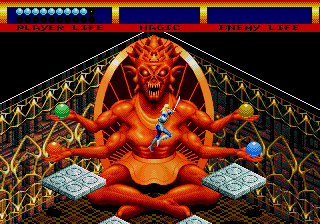 Graphics are not the only issue with Light Crusader. Unlike most games of this type from this era, movement in Light Crusader is not entirely grid-based. The background is isometric, but all object sprites can be moved freely around the environment. When done well, this is a good thing, as precise, incremental movement in any direction is theoretically possible and just feels more natural. It just doesn’t quite work here, especially considering that you can push but can’t pull, and the objects also feel a bit too light. It’s impressive that they attempted physics on a 16-bit system though.

The lack of rigidly defined spaces in Light Crusader‘s environments make solving the various object puzzles, achieving comfortable success with the three-dimensional jumping, and engaging the enemy in mortal combat an imprecise, frustrating and frankly, annoying experience. The collision detection is extremely suspect and distances are difficult to judge consistently. Add to this a weapon swing that is nearly impossible to aim and you have a recipe for a headache. It just shouldn’t be that hard to attack something that is right next to you. This causes many battles to devolve into a slightly ambiguous game of hit and run.

In the dungeon, it can be tough to know which door you’ve just unlocked because there is no indication of any change on the map. The elemental magic system could have been interesting, but in practice it is too arbitrary, as you won’t know the effect until you’ve experimented with it. Like Gunstar Heroes, there are four elements – air, fire, earth, and water – and you can combine them to make specific spells. There are fifteen different types altogether, ranging from attack to healing spells, but not all combinations are useful. 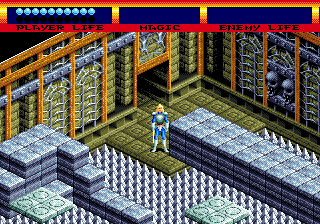 On the bright side, the music is well done. In the dungeon, it is context sensitive though thoroughly scripted (a rarity for the time), and this works well as a device to create suspense and generate fear. Overall composition is also very different when compared to any of Treasure’s other efforts. The music in Light Crusader employs a sparse, baroque meets ambient approach. The town music is a catchy fugue. Dungeon music ranges from atmospheric to heart-pounding. Even with the fact that the item/map screen tune is basically stolen from “The Lamb Lies Down on Broadway” by Genesis (specifically, Silent Sorrow in Empty Boats), the sound on the whole is easily the most fully realized, and best, part of the game. 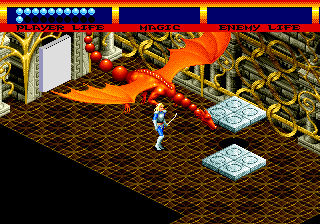 Light Crusader is certainly not a terrible game, but in the company of the likes of Gunstar Heroes, it is a misstep. As for the import versus the domestic release, the only differences appear to be the Japanese text and the superior, though still questionable, cover art. The American cover is laughably terrible. Despite its mediocrity, it’s worth checking Light Crusader out if you can get it for a good price; which is likely considering that it is relatively common for such a late release. If anything, the fact that it is the weakest Treasure game on their beloved Mega Drive makes it historically significant.

Light Crusader is not the most frequent guest in Sega’s compilations, but it was included in the Sega Genesis Classic Collection Gold Edition for PC, and is also available on the Wii Virtual Console.

Thanks to John Ames for the heads-up on the stolen Genesis music!