In the late ’80s and early ’90s, Sega and NEC were pumping the audience for the world of 16-bit consoles. The general populace had no idea what that actually meant, other than 16 was bigger than 8, and therefore meant better. One of Sega’s first big marketing ploys was the slogan “Genesis does what Nintendon’t”, and a strange little RPG called Sword of Vermilion was one of those games featured prominently in these advertisements. 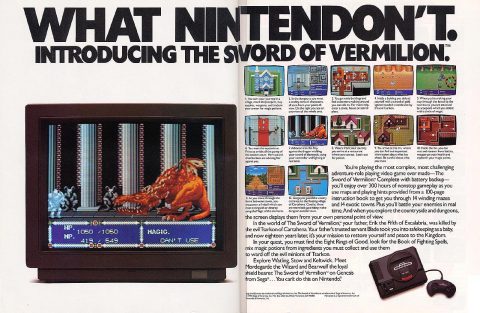 All it took was a single screen. See that knight going up against that gigantic boss character? That’s way more impressive than anything your wimpy Nintendo could do! The box cover even expounds its blistering 5 megs of cartridge space – a whole single megabit above the largest NES games at the time – again, playing into Sega’s strategy of “larger numbers = better game”. It also slightly betrayed Sword of Vermillion‘s true nature – it’s not an action-arcade game, like the screenshot seems to imply, but rather an RPG with some action elements. 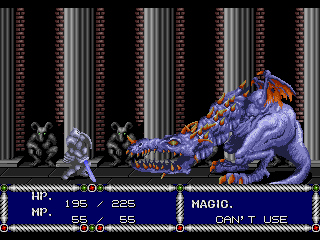 There’s certainly something impressive about its pedigree. Sword of Vermillion was designed by Yu Suzuki and his AM2 team, his first console game after working on arcade titles like Space Harrier and After Burner. The soundtrack was composed by the legendary Hiroshi Miyauchi, Suzuki’s long collaborator who also did the music for OutRun, Space Harrier and After Burner. The game features three different play styles – overhead town and action scenes, first person mazes, and side-scrolling boss battles – diversifying its appeal beyond the standards of the time. And Sega of America was kind enough to include a 106 page hint book, just in case you get lost. Of course, it’s all great on paper – in practice, it doesn’t quite work out. 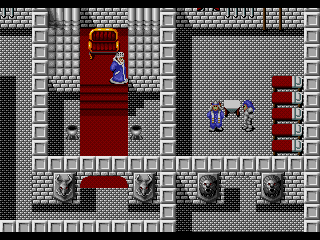 The story revolves around the despicable king Tsarkon of Cartahena, who invaded the peaceful kingdom Excalabria. King Erik of Excalabria knew he could do nothing by himself after witnessing the destruction caused by Tsarkon’s forces, so Erik orders Blade, his boldest knight, to take his son and escape to a place far away. Blade eventually ends up in the town of Wyclif, where he raises the prince as his son for eighteen years. On the day of Blade’s death, Blade tells the prince of his true destiny, and it’s here where you step into the young man’s shoes to take revenge against Tsarkon. 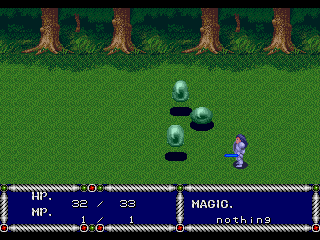 The first play style is the overhead view, and is active when you’re in a town, much like any other RPG before and after it. However, once you get out of a town and onto the world map or dungeon, the perspective switches to the first person, which imitates games such as Might and Magic and The Bard’s Tale. Unfortunately, you have to collect maps by talking people or opening treasure chests, so sometimes you have to wander around until you figure out where you are. Once you get to a dungeon, you’d better have a lantern or a lighting spell, because dungeons are pitch black. These can expire, leaving you to die in the dark, which might stir memories of the adventure game Shadowgate, although eventually you can find candles which last indefinitely. 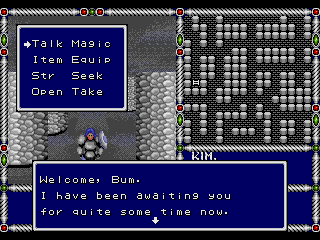 When running around in these mazes, you’ll occasionally be yanked into random battle scenes. These, like the town scenes, are portrayed with an overhead perspective, similar to The Legend of Zelda games. While it feels great at first, the bad hit detection and your four pixel long sword makes things very hard. Once you get magic, your life gets much easier, because you can either throw projectiles at the enemy or just use an “attack all” spell that usually destroys all of your opponents. The enemy encounter rate is also pretty high, which can make things frustrating at the beginning of the game when you have no recovery items. However, if you die, you don’t get a Game Over – Sword of Vermilion takes the Dragon Quest approach and restarts you back at a church with half of your money taken away for religious purposes. 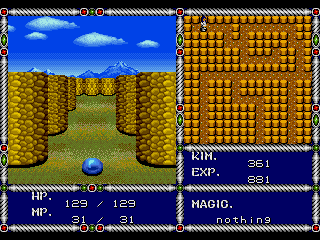 The viewpoint switches again when fighting bosses, here called “Archfiends”. The battlefield is a single screen side view and you fight giant monsters that fill up roughly half the screen. These big 16-bit sprites usually populated the arcades and were generally unheard of at home at the time, which makes it apparent to why they were featured so heavily in the advertising. Much like the random battles, though, these scenes suffer from its own set of problems. First of all, you cannot jump or use magic. Second of all, you can only attack, not defend, which makes some of these battles a hair-pulling experience, especially if you been in the dungeon for over an hour already, screaming at the game because your candle went out. At least you can duck and destroy projectiles with your sword, so it’s not a total loss. 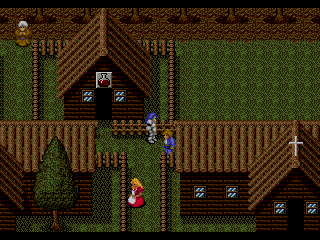 While Sword of Vermilion may be 16-bit in terms of graphics and scope, it feels more 8-bit in design. The interface is annoying, as opening treasure chests is a multi-step process that requires traveling through more menus than necessary. The translation, too, is fairly middling. While there aren’t any obvious grammatical errors in Sword of Vermilion like in NES games, there are some rather awkward NPC conversation scattered throughout. At one of the taverns you come to, the bartender tells you, “If you’re not hungry, then I can’t help you.” Conversations like this are scattered throughout the game and make it very entertaining to see what people have to say. And after seeing the wholly impressive boss characters, it’s disappointing that the rest of the game looks as bland as it does. The style is very similar to Phantasy Star III, which would be released a few years later and was equally underwhelming then. 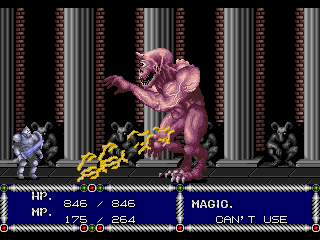 There’s no doubt that Sword of Vermilion is an ambitious game, and its multiple play styles help differentiate itself from dozens of other 8 and 16-bit RPGs, even today. But the issues in each of them – mostly the poor interface and dodgy controls – help sink what would otherwise be a fascinating title. It’s also a bit on the long side, with approximately twenty hours of game time, and it gets quite tedious as it goes along. (The advertising tries to say it has 300 hours of gameplay, but that’s really, really, really pushing it.) It’s not completely worthless – it just requires a fair bit of patience to enjoy. 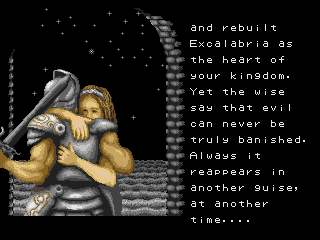 Despite its middling reputation, Sword of Vermilion has been featured on some of its compilations, like the Sega Genesis Collection for the PlayStation 2 and PlayStation Portable. (It was one of the few titles omitted from the later Sonic’s Ultimate Genesis Collection for the PlayStation 3 and Xbox 360, to give some idea how little many care for this title.) It plays well, although like the other titles in the compilation, the music and sound is a bit messed up. It was also released on the Wii Virtual Console, with better emulation. The game is also available as part of the Sega Genesis Classic Collection Gold for PC (and as an individual download per digital distribution). 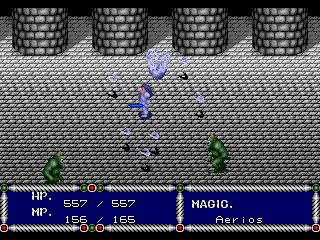