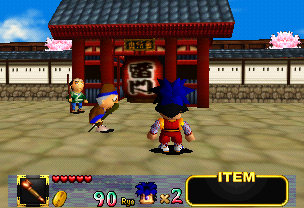 Known as Neo Momoyama Bakufu no Odori in Japan (“Dance of the New Peach Mountain Shoguns”), the first Nintendo 64 game is a fully 3D affair, and while it’s aged better than some other 3D games of the day, it’s still pretty clunky. The graphics are a blurry mess, the framerate is terribly inconsistent, and the terrain is flat and expansive. Since your weapons are so short, it’s sometimes hard to hit bad guys, and trying to attack with projectiles is an exercise in futility. The characters generally control well, except you really have to push hard on the analog stick to get them to run. The camera has its share of problems, too – it’s completely out of your control, and many times you just have to wait until its reorients itself before you can go any further. 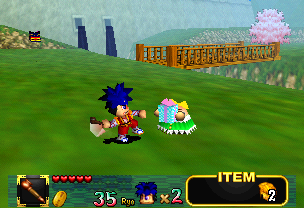 Mystical Ninja Starring Goemon goes back to the adventure stylings of Goemon 3 on SFC, except this time it’s even more Zelda-like. The dungeons revolve around finding keys, although the emphasis is more on platforming than puzzle solving. There are even items to give you a map and show you where the boss is located. The Impact sequences are back, and now fully 3D. You’re even given an extending pipe that lets you reel enemies in close and attack them.

In spite of its quirks, Mystical Ninja Starring Goemon is awesome just because it’s finally another Goemon game, in English, The translators probably had no idea how to handle the humor, because much of the dialogue makes absolutely no sense, but it does add to the charm. The laugh track from Goemon 3 is also back, lending to the sheer absurdity of the writing. 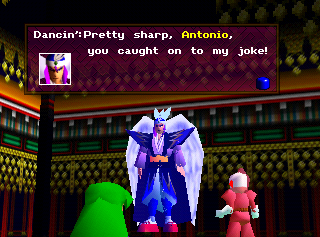 The main bad guy is a fellow named Dancin’, who wants to turn the entire land of Japan into his stage. He dislikes Goemon’s name and calls him “Fernandez”, while Ebisumaru is dubbed “Antonio”. He also breaks out into song randomly. His henchmen are oddballs named Baron and Colon, who are completely oblivious to how ridiculous they look. Even the villagers in the towns have random bits of amusing dialogue. It makes you wonder how much you’re missing out on the writing in the other games. There are tons of other bits of silliness too – like turning into a Super Saiyan (it could be done in Goemon 3 SFC but it’s much more amusing here) or visiting the fortune teller, who screams out “PLASMA!!!” for some indiscernible reason.

Even though the visuals and controls are a little dated, the music stills holds up pretty well, with lots of high quality, catchy tunes. Most impressive are the vocal songs, used for the intro and Goemon Impact sequences, sung by Dragon Ball Z vocalist Hironobu Kageyama and Mazinger Z vocalist Ichirou Mizuki, respectively. In the original Japanese version, the prologue (where Ebisumaru tries to get a discount at a store by stripping) was fully voiced, but this was removed from the Western releases. Other than some small changes here and there – the manji blocks have become star blocks, and the Wise Man’s porn mags have turned into car mags – the game stays pretty close to its Japanese heritage. One of the villagers even remarks that you can learn a lot about ancient Japanese geography from the locations you visit. 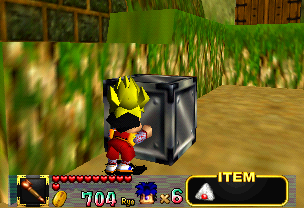 Before Ocarina of Time, Mystical Ninja Starring Goemon stood out as the only vaguely RPG-ish game on the N64. It’s a little lacking nowadays, but the goofiness makes it worthwhile.