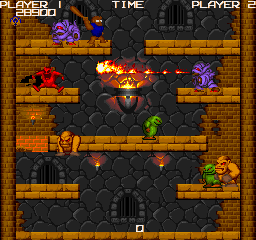 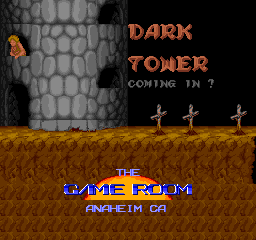 Bubble Bobble was one of Taito’s biggest hits since Space Invaders, spawning a high number of imitators trying to match its basic formula. These types of single screen action-platformers, also known as “comical action games,” involved eliminating every enemy on screen and often taking place in a cute or quirky setting. It was a hard formula to mess up and easy enough to imitate, with Toaplan’s Snow Bros being one of the more recognized Bubble Bobble clones. On the absolute polar end from Snow Bros in terms of quality is a hack job titled Dark Tower by an Anaheim-based company known as “The Game Room.” No, this game has nothing to do with Stephen King’s seminal fiction series and you don’t play as Roland Deschain on a journey to capture the man in black and make his way to either the physical or metaphorical tower. It’s a more standard affair where you descend fifty levels of a tower for…some unknown purpose. The title screen shows a blonde girl in a window saying “coming in?”, but she’s never seen again after this, so it’s unknown if she’s a damsel or succubus or what have you.

This mystery blonde lady is only the start of Dark Tower‘s inexplicable elements. The game itself sees you controlling what appears to be a bespectacled bearded nerd wearing only a long blue shirt. Was this just one of the programmers who installed himself into the game as some sort of power fantasy? He’s armed with a club which he uses to beat incredibly familiar looking monsters, most of their sprites having been ripped off from Ghosts ‘n Goblins but slightly altered. The most common foes look like the “Big Men” enemies from G’nG‘s second level, except without their inexplicable tattoo and red underwear, and another enemy is very obviously the Red Arremer without any wings. Your slovenly protagonist is armed with a club with which to beat these ripoffs into oblivion, taking five consecutive strikes to send them flying. A slightly clever mechanic is that flying enemies can strike other enemies and cause them to go bouncing around the level in a sort of haphazard domino effect. If you’re lucky, you can take them all out with a single pawn and gain a massive point bonus by collecting the knight heads that pop up afterward. However, you don’t get anything useful from enemies aside from point items, making the gameplay feel a bit flat without any power-ups.

Dark Tower seems alright for a diversion if nothing else, but anything more than a couple of levels soon grows boring. Almost all enemies act the same except for these purple mummy things that shoot fire and the not-Red Arremers who turn into bats, ironic since they no longer can fly in their default forms. Every ten levels, you encounter some blue rocky demon as a boss (also ripped off from G’nG) that spams these obnoxious blue slime enemies, and when you face two of these bosses at the same time in later stages, one of them inexplicably takes a lot more punishment than the other. You’ve met all the enemies you ever will by stage eleven, so you have to ask yourself if the remaining thirty-nine are worth it. Spoilers: They aren’t. The levels themselves offer little variety aside from slightly differently placed platforms, and the backgrounds are the same dull shades of gray and gold all throughout. Stages thirty-one through fifty are indistinguishably identical to stages one through twenty, and it loops over again after stage fifty all the way back to the first (without any fanfare or ceremony, of course), so you have to wonder why the game essentially repeats itself for two-thirds before re-repeating itself from the top.

To recap, the stages are redundant, the backgrounds are bland, and the enemies are lackluster and stolen from a better game. The cherry on top is the also plagiarized music, which is the mission four music from Double Dragon (also where the credit insert jingle is stolen from) on constant repeat. It’s a good tune in its proper context, but it feels out of place here and the overall mediocre design of the game somehow drags the music down with it. And seriously, what the hell is up with your player character?! Points go to having a geek with glasses rather than some Fabio clone, but the “hero” just feels oddly out of place with the rest of the game’s muddy aesthetics. Dark Tower feels like a pirate or hack of something else (and a rather antiquated one considering it was made in 1992), but it appears to technically be its own thing, just a rather crappy rendition of a formula done far better by Taito, Toaplan, and other developers who understood the concept of originality.