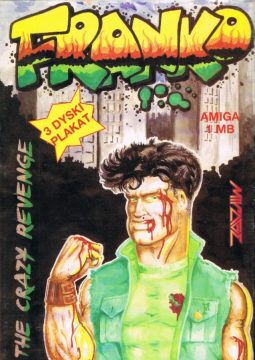 In the early 90s, the success of games like Final Fight, Golden Axe and Teenage Mutant Ninja Turtles in the arcade led to the widespread popularity of belt-scrolling beat-em-ups. But while these games were prolific on consoles, the genre was underserved on the Amiga, where it mostly just got a handful of substandard ports. And so, a young Polish development team attempted to solve this problem with the hilariously titled Franko: The Crazy Revenge, a violent romp through the streets of post-Communist bloc Poland. It is possibly the worst beat-em-up ever made.

Many Amiga games were held back by the frustrating fact that the joysticks only had a single button. So, in Franko, you hold down this button, which will cause your character – either the bulked up, white T-shirt wearing Franko or his half-leather jacket-wearing buddy Alex – to start wildly punching. By pressing the joystick in any of the eight directions, you can perform various other moves, including kicks, jump attacks, and throws. It’s about as clumsy as it sounds. Enemies seem to shrug off normal attacks most of the time, so it’s generally just better to knock them down as fast as possible or chuck them across the screen. If they manage to get the better of you, they continue to attack relentless, causing a loop that’s impossible to escape from, until they actually hit you far enough that there’s enough time for you to stand up and walk around, without getting knocked back down again. There are only three stages, but they’re really, really long.

Now, most arcade beat-em-ups were actually quite sanitary despite all of the face-punching and stomach-kicking going on, with nary any gore, just flashing dead bodies. Franko fixes this little problem by having enemies enemies spit up and leak blood after each beating. The intro is similarly savage, with a close-up of a poorly drawn thug getting his teeth knocked out, with another cutscene showing Franko getting the shit kicked out of him, setting up the crazy revenge alluded to in the title. But the whole thing is far more juvenile that some pools of red pixels – there’s graffiti sprayed about that spell out naughty words (“Nike its shit”, one wall proudly proclaims), enemies can be seen in the background urinating on the walls, and one of the enemies is even a flasher, who removes his longcoat to reveal his flaccid manhood to the poor, poor player. The bonus stages are a bit of brilliance, where you careen down the streets driving a tiny little Fiat, with any pedestrian that crosses you getting reduced to a pile of limbs and goo. The game is not without morality though – if you hit a bad guy, you’ll regain health, but if you smack into an innocent old lady, you’ll be injured.

The sampled guitars of the soundtrack sound cool at first, until it becomes apparent that the game plays the same ten seconds of music throughout the entire game. There are a number of sampled voices, mostly screams, along with the sound of someone yelling “Let’s go!”. The rest are either unintelligible garble or Polish – it’s hard to tell. The visuals are laughable, with the characters drawn with hilarious overpropotioned muscles, though it’s got an amusing grade-school sketchbook quality to it. In fact, together the violence, nudity and scatological humor, the whole game looks and feels like it was developed by a bunch of thirteen year old boys who somehow discovered a programming textbook. While it definitely plays far, far worse than the average Final Fight-clone of the era, this extra layer of juvenile exuberance at least sets it apart from the pack.

Franko originated on the Amiga, but was ported to the IBM PC two years later. At first glance, the PC version looks to be the better of the two – the increased color palette means the characters seem to be flesh-colored (as compared to the haggard yellow of the Amiga version), and the game plays much faster. Furthermore, the Amiga version is severely hindered by the fact that it stops to load for several seconds every time a new set of bad guys enters the screen, whereas the PC version is unsaddled with such issues. But in spite of technically being the better game, the levels in the PC versions are actually entirely different, and are missing most of the most juvenile bits (like the peeing guys), thereby making it kind of pointless.