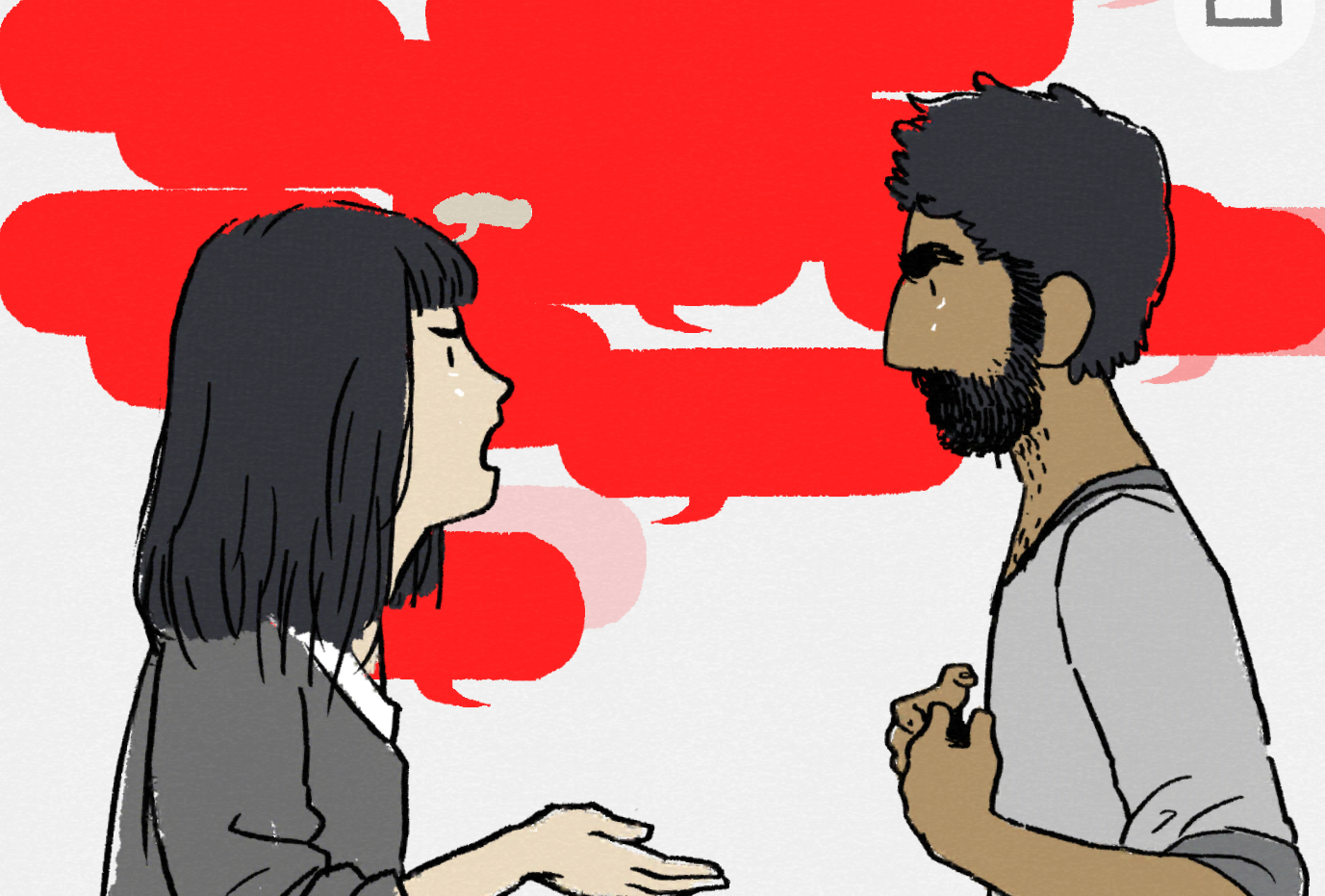 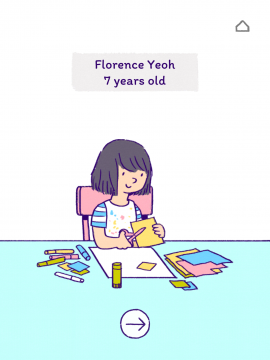 Personal games – games whose narrative strictly focuses on the quotidian and whose mechanics bend to meet that narrative – have occupied an ambiguous position, especially over the past decade. On the one hand, gamers have seen (and unfortunately attacked) these games as politically charged works. It’s not hard to see why they would argue this. Historically, commercial video games have preferred design that centers the player above all else. This usually happens with epic tales of grand fantasy where the player takes on the role of the hero, but even genres like dating sims can center players by depicting personal relationships as challenges to be overcome or systems to navigate. Games like Dear Esther, Gone Home, Depression Quest, To The Moon etc., in construing the personal as an end worth pursuing in itself, challenges the status quo and takes on a political character.

The irony, of course, is that when one puts aside that status quo, one finds these games tend to avoid overtly political thematic material. They might acknowledge the political implications of their subject matter, but those implications take secondary importance to the human drama that the game constitutes the game’s core. They’ll often remove themselves from these matters into settings set in an ambiguous time and place: a lighthouse, an island, an unknown city, etc. 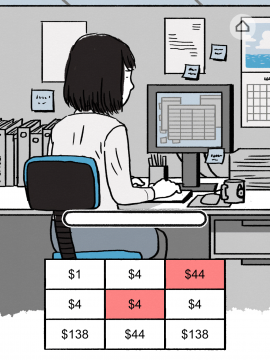 Florence is one of the more recent examples of this trend, which is to be expected. Although the game is developer Mountains’ first project, publisher Annapurna Interactive has previously worked on games like What Remains of Edith Finch, Kentucky Route Zero: TV Edition, and Flower – games more concerned with finding beauty in the ordinary than in creating something specifically for the player to experience. Yet Florence struggles more than its peets in enacting its goals. This isn’t to say the game lacks value. It displays a level of nuance, empathy, and emotional intelligence that other games would envy. Unfortunately, its failure to properly account for the social/political conditions it depicts puts important limits on how far that nuance and empathy can reach.

Given the nature of the game, the usual methods of summarizing games don’t apply to Florence. The narrative itself is easy to summarize: it follows the daily life of Florence Yeoh, a 25 year old woman who feels dissatisfied with her life. Florence and everything her life implies are everything to the game. It wants nothing more than to explore them and detail, and it is this end that gameplay is made to serve. Interactive moments, although frequent, are brief and relatively simple, always made to represent whatever moment Florence is currently depicting. One moment asks you to choose how Florence will respond to her mother over the phone; the next may simulate her painting a portrait of her new boyfriend by having you uncover the already present image on the canvas; yet another brushing her teeth or flipping through Twitter. The story’s principal actors include: 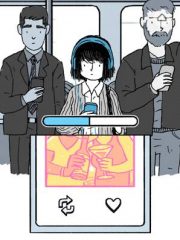 Florence Yeoh
An average 25 year old woman living on her own. Growing up, Florence originally wanted to be an artist, only for others to encourage her to give up that dream in favor of something more realistic. It’s this life that the game focuses on in the present: she works a boring office job, and she puts up with her mother’s regular reminders to settle down and find a boyfriend. Unfortunately, there are signs that Florence is unfulfilled with this life other people have created for her and regrets having given up her dream in the first place. 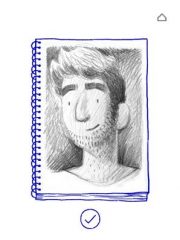 Florence’s boyfriend, the two first meet when she walks by him playing his guitar in the park. It’s always been his dream to become a professional musician, and with Florence’s help (or at least her encouragement), he begins pursuing that dream shortly after the two start dating. 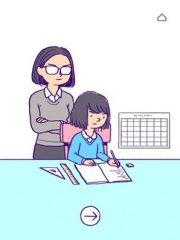 Florence’s mother. Although acting in what she thinks are her daughter’s best interests, she comes across as a vaguely antagonistic force. From childhood, Mrs. Yeoh has imposed strict expectations on her daughter: get good grades, always focus on success, lead a practical, productive life. By the time the game starts, it’s unclear that this life has bore Florence the fruit her mother suggested it would. 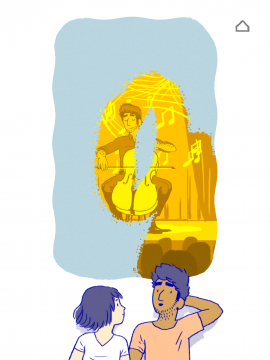 Moods aside, Florence’s most notable accomplishments lay at the formal level, IE in the strong control the game displays through its craft. Choosing to structure play on a purely moment to moment basis affords the game a great deal of flexibility and nuance in tracing the lives of its characters. Recounting all of these nuances would be excessive. To pick just one example, Florence takes a keen interest in the everyday. It sees the quotidian as having an innate value beyond what its characters might assign it, and play is designed to make that value manifest. One moves quickly from event to event without any fanfare. Beyond accurately representing the nature of those events, this approach allows each moment to stand on its own, free of any embellishment or greater significance that might contradict the game’s original intent. Were one to limit their analysis of Florence to this level alone, they would be hard-pressed to find any fault with it.

By contrast, examining the game at a thematic level paints a much more ambiguous image. On the one hand, Florence presents its action through a universalizing lens. Instead of being only the product of their present circumstances, for example, the disappointments and ambiguities the two protagonists face become, plus the inevitable features of the path to adulthood. It makes sense why Florence would choose to frame itself this way. At such a general level, the game can explore the ideas that interest it – the necessity and imperfection of human relationships, the value people assign to their lives – with the nuance those ideas deserve. It’s also at this level where some of its greatest strengths, like its desire to comfort its main characters or its ability to portray psychology, relationships, subjectivity etc. in depth through play, make the most sense. In light of both Florence and Krish feeling as though they have to justify their existence through their ability to accomplish clearly defined goals, Florence’s interest in the everyday becomes a viable alternative to their woes. 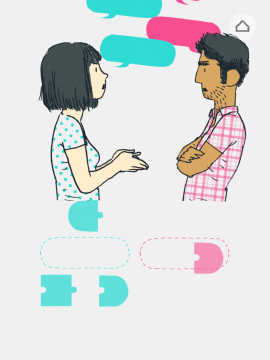 Yet for as general as Florence might want its narrative to be, that narrative is nonetheless implicated in the contemporary problems that Millennials face. On some level, the game appears to recognize this and develops that point, especially regarding how Florence’s relationship with her mother has affected her life. Unfortunately, this doesn’t prove to be enough. The game ultimately prefers to remain at the general level, and this preference prevents the game from enacting its goals to the extent that it could. For as much as Florence wants to comfort its protagonists for the troubles they face, it fails to fully recognize what those problems might be.

For example, on close examination it’s difficult to say Florence (and possibly Krish) is as average as the story frames her to be. She has a stable, well-paying job. So well-paying, in fact, that she can afford an apartment spacious enough for herself and Krish to live in before she’s even met Krish. Moreover, this job affords her enough leisure time and money to enjoy every luxury her city has to offer. Given all of this evidence, the characters are less akin to the average Millennial and more akin to an idealized version of Millennials; the kind of Millennials who lead lives that many other Millennials would envy.

This isn’t just a matter of accurately representing one’s subject matter, but of correctly identifying problems and solutions. The game recognizes Florence and Krish’s need to connect with others, but with its subtle yet strict division between activities where one can express themselves and activities where one can’t, it construes social media as either mindless busy work or as isolating individuals from themselves and those around them, and physical space as the only stage on which authentic human relationships can play themselves out. Even accepting this for the sake of argument, one finds the applicability of the lessons Florence hopes to teach limiting; perhaps too limiting to be of any use to people like Florence and Krish. How does one enter a fulfilling relationship if social media is off limits but opportunities for in person communication are limited? How does one overcome the many barriers standing in one’s way and find the financial stability that Florence clearly needs to enact her goals in the first place? 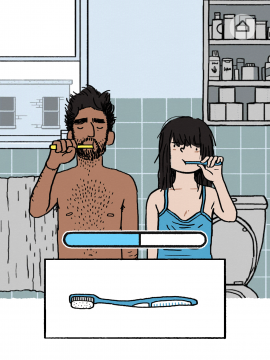 Because Florence takes place after these issues have already been dealt with, it’s unable to answer these questions. Moreover, for all the game does to critique the traditions that Mrs. Yeoh espouses – work hard, focus on your career, settle down with a man already – in the end, it vindicates her perspective by delivering personal fulfillment to Florence through those very traditions. One could read all of this as the game demonstrating sympathy for the Millennial desire for something more out of life. However, one could also read its desire to tell a general romance story as working against the characters who act that story out and the generation those characters are meant to represent. Again, Florence isn’t as straightforward a read as initial impressions might suggest.

Still, the game’s intent is more than appreciated. Florence is a game with a deep desire to comfort not only its main characters, but those in similar situations. Its argument is that one can find value in their life without having to justify it economically or attaining your life’s dreams this early into adulthood. That in itself is a powerful message and one definitely worth arguing. Even if the game doesn’t completely understand how to best comfort its characters, it’s hard to hold its empathy or its desire to do so against it.